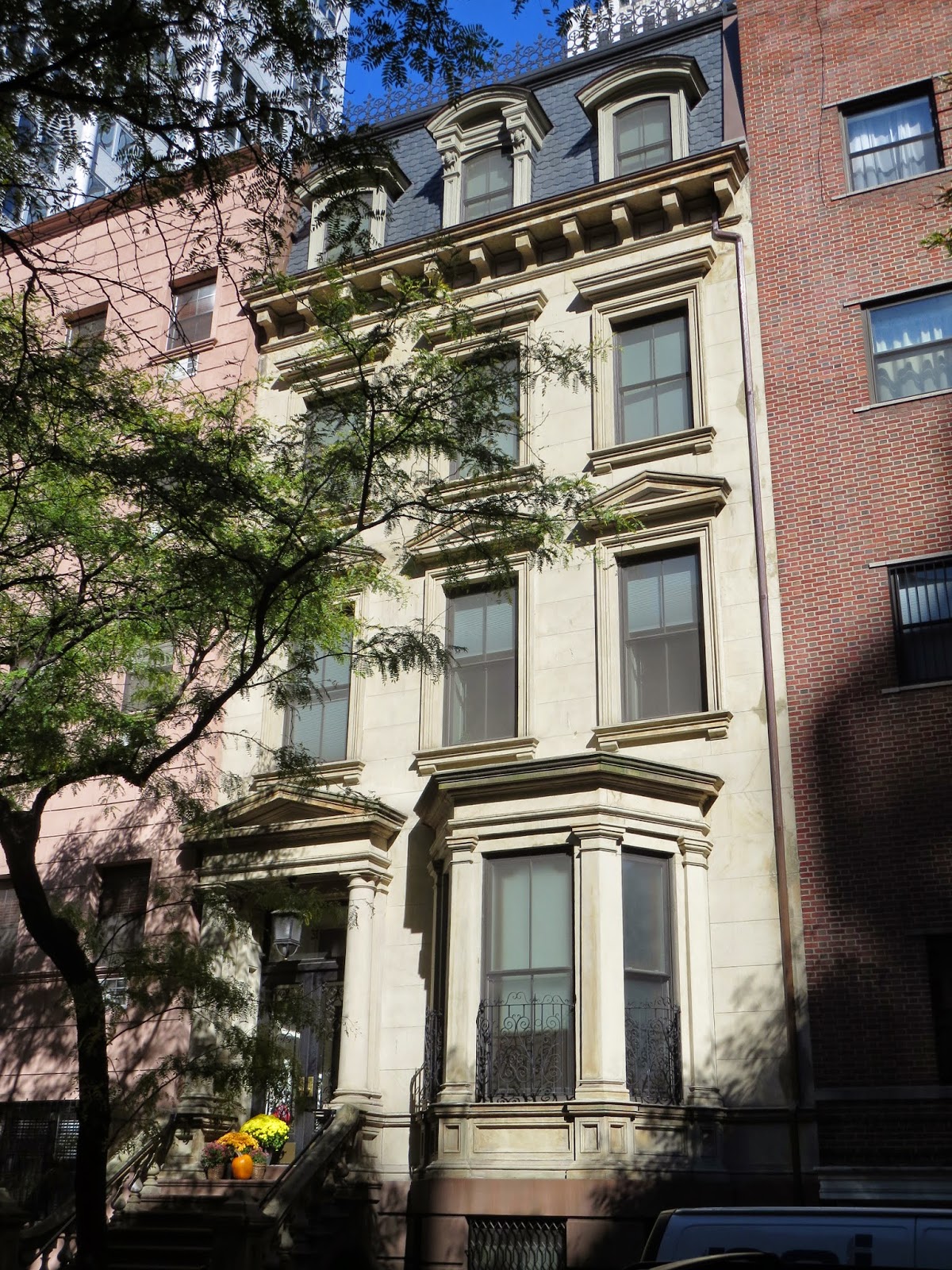 Thompson N. Hollister and his wife, M. Louisa Hollister, were among the wealthy families who moved to the developing Murray Hill neighborhood just before the outbreak of the Civil War.   Their Italianate-style granite-clad home at No. 31 East 38th Street was the latest in architectural fashion.  The carved stone window surrounds and classical pediments were added touches that proved to passersby that the family could afford expensive extras.

The entrance, accessed by a broad stoop with heavy stone Italianate newels and railings, was flanked by Doric columns standing on paneled stone blocks.  They upheld the deep entablature and pediment that matched those of the openings.  Doric pilasters and carved panels carried the motif to the three-sided, two story bay which extended to the English basement below. 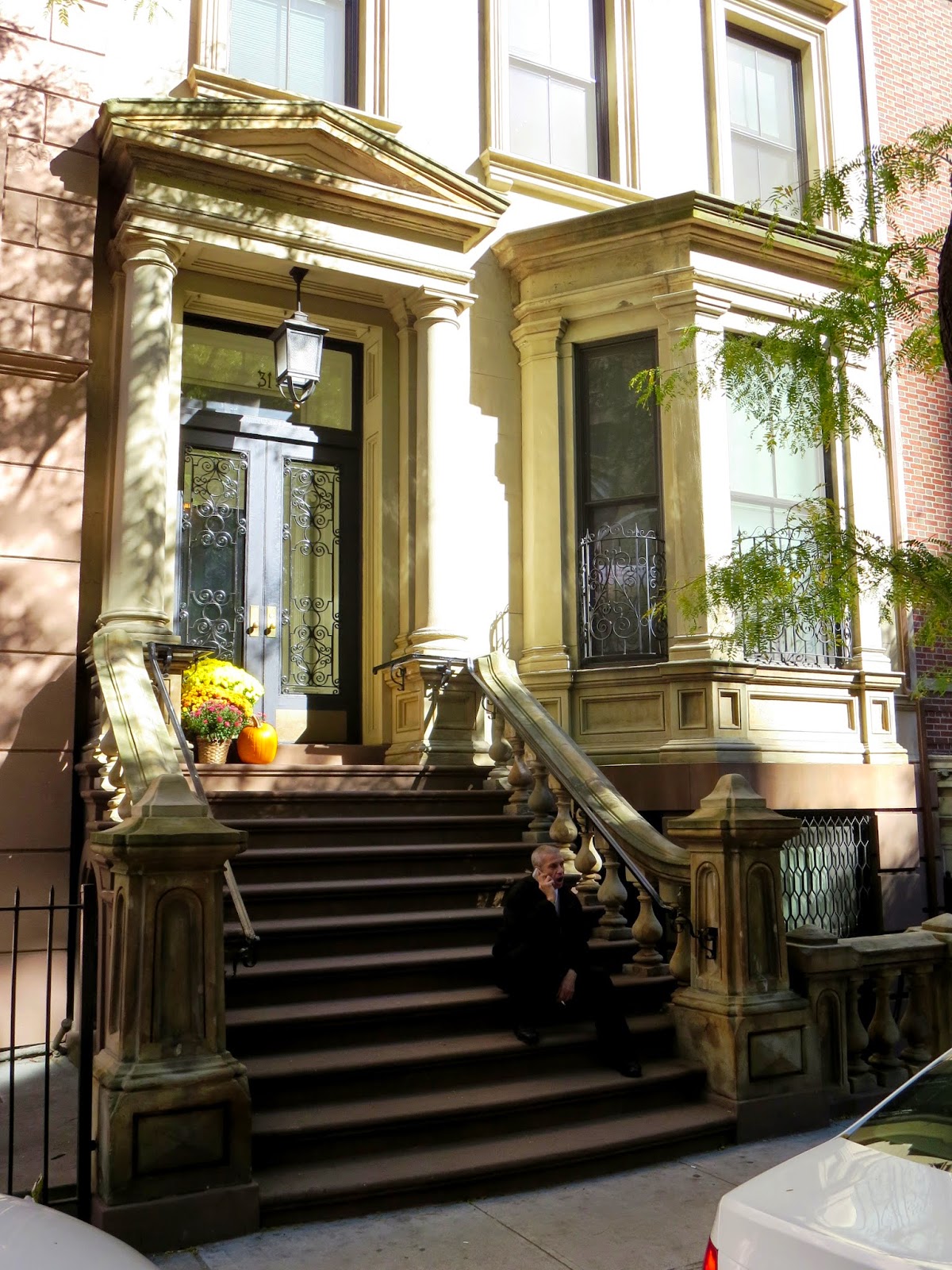 Tragedy would strike the family as 1865 drew to a close.  Little Mary De Forest Hollister, the couple’s youngest child, died in the house on Saturday, December 30.   Distraught friends and family gathered in the parlor at 3:00 on Tuesday, January 2, for the girl’s funeral.

Within a few years the Hollisters would move to the nearby No. 15 East 35th Street.  The 38th Street house became home to the family of Philander Hall Butler, listed in city directories as “merchant.”   It was most likely Butler who added the fashionable Second Empire mansard roof. 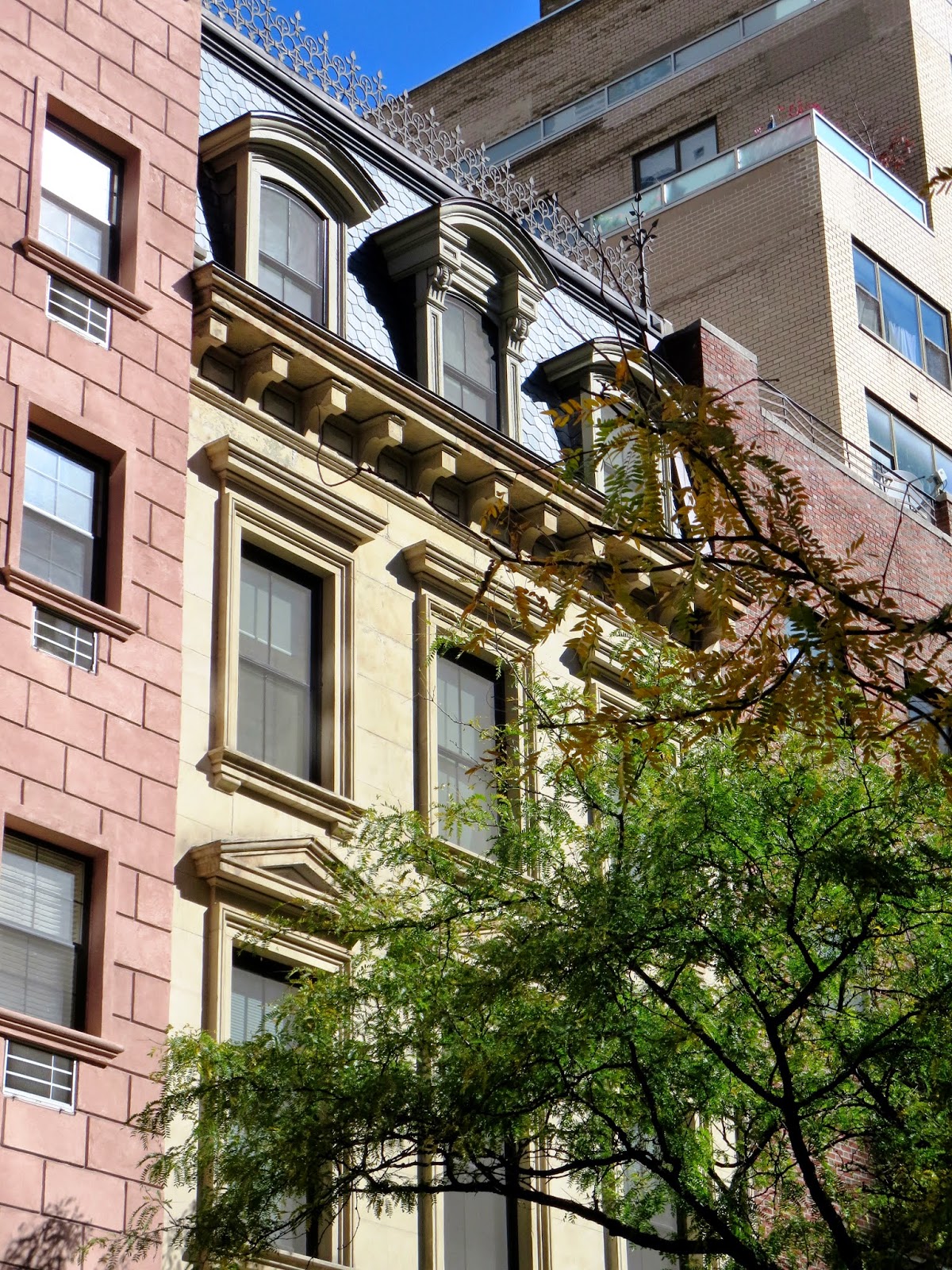 He had married the former Louisa Clinch, sister of Cornelia Clinch Stewart—wife of the multi-millionaire dry goods merchant Alexander Turney Stewart.  The Butlers reared five children—Rosalie, Virginia, Helen, Maxwell, Lillian and Prescott Hall Butler.  The Butler women, as expected, were highly involved in charitable causes.  Rosalie was for at least four years between 1873 and 1877 the secretary of the Local Visiting Committee for Bellevue Hospital.

Alexander Stewart and his wife lived in a block-engulfing marble mansion on Fifth Avenue, across 34th Street from the William B. Astor mansion.  According to The Cyclopedia of American Biography, its private art gallery was “the largest and most valuable private collection [in the world], excepting that in the Vatican.”  When Stewart died in 1876 he left his wife a $40 million fortune that reportedly made her the wealthiest woman in the word.

In 1886, six years after the Butler family sold No. 31 East 38th Street, Cornelia Stewart died.  Her will directly pulled them into a legal maelstrom that would last for years.  Although Louisa Butler and her children (Philander had died by now) were provided for; Prescott Hall Butler filed to have the will dismissed.   In accordance with an 1877 codicil, the children of Cornelia’s and Louisa’s brother, Charles Clinch and Sarah Smith, received approximately $4.6 million each.   Cornelia’s lawyer helped himself to an estimated $9.2 million.  Louisa’s children received as little as $50,000 each.

Prescott Hall Butler’s complaint also alleged that missing from the estate’s inventory was “about $20,000,000 worth of property including a large and valuable collection of works of art,” according to The New York Times on Fe bruary 19, 1887.

In the meantime wealthy businessman and newly-elected Mayor of New York, William Russell Grace purchased the house in 1880.  Grace was the principal of the W. R. Grace & Company and had just become the first Irish American Catholic mayor of the city.  In addition to his business income, Grace was earning a yearly $10,000 stipend as Mayor.  That figure would translate to about $235,000 today.

Grace had married Lillius Gilchrist on September 11, 1859 and the couple had 11 children.  Of these, four had died before the family moved to East 38th Street.    Within the first few years of living here, two more children would pass on.  On April 21, 1882 little Caroline died, just one day before her third birthday; and two years later 16-year old Agnes died.

A time-honored tradition in New York, stretching back to Dutch colonial days, was the installation of Mayoral lamps outside the mayor’s residence.   William R. Grace was closely involved with the choice of his lamps, described by The Evening World:  “There stand at the foot of the broad steps leading up to his beautiful Berea granite residence at 31 East Thirty-eighth street, two stately beacons.  The lamps have large spherical globes, held in frames of  burnished bronze, on posts of bronze in graceful design.  Mayor Grace’s lamps cost $326, according to the records, and are the most expensive of all  the Mayors’ lamps.”

Among the grand entertainments in the house would be the debutante reception for Grace’s niece, Elisa.   With the young woman’s father, M. P. Grace, away on business in Peru, Lillius and William took over the responsibility.   Held on December 22, 1888, it began in the afternoon and lasted well into the evening when dancing took place.  The New York Times remarked on the elaborate decorations.

“The reception began at 4 o’clock, and the parlors were handsomely decorated with flowers.  Masses of holly banked the stairways, large rubber plans and palms filled the corners of the halls and drawing rooms, and the parlors themselves were filled with smilax, roses, and Autumn leaves.”  The newspaper noted “The flowers were nearly all from ex-Mayor Grace’s conservatory at his country seat at Great Neck, Long Island.”

Old and elite family names passed through the corridors that evening, including Townsend, Hewitt, Cornell, Borden and Roosevelt.  The current Mayor, several judges and at least one baron and baroness were included on the guest list.

That glittering event would be outdone by the reception for the Grace’s own daughter, Lillius, four years later.   On December 18, 1892 The New York Times reported that Lilas had been introduced “into the social world yesterday afternoon” by her parents “when they gave a reception from 4 to 7 o’clock in their handsome home.”

This time Mrs. Grace had the drawing rooms professionally decorated by Siebrecht & Wadley.  “Between the windows in the front drawing room were several immense cocoa palms reaching to the ceiling.  The spreading tops formed a canopy, under which Miss Grace received.  The mantels in the front and rear drawing rooms were banked with American Beauty roses, and the atmosphere of the parlors was heavy with the sweet fragrance of the plants, which filled in the fireplaces.  Orchids adorned the dining room, where a buffet lunch was served.”

On January 29, 1893 The New York Times reported that Grace had “sold his handsome house” and would be building a new mansion “on the west side near Riverside Drive.”   It was purchased by William L. Bull for $100,000.  Four months later Bull resold the house for a $10,000 profit.

No. 31 East 38th Street became home to Julia Sewell Cameron, widow of Adam Scott Cameron who had died in 1877.  Julia had taken over the administration of the A. S. Cameron Steam Pump Works, located in several buildings encompassing the block bounded by 23rd and 24th Streets between Avenue A and First Avenue.  With Julia in the 38th Street house was her son, Walter Scott Cameron.

Less interested in business than his father, W. Scott Cameron was well-known in the country club circles as a tennis player and fox hunter.  Although he was graduated with honors from Yale in 1897, The New York Times would note that he “was closely identified with the life of Southampton.”  On April 23, 1902 his mother gave a dinner to celebrate his engagement to Rosalie de Goicouria.  Rosalie’s sister was well-connected in New York social circles; having married August Belmont, Jr.

The wedding was held on April 30; and only a few months later Rosalie was nearly widowed.  On November 15, 1902 W. Scott Cameron was acting as Master of the Hounds at the Meadow Brook Hunt Club when he was thrown from his horse.  “Mr. Cameron lay unconscious, and many among the large crowd of spectators in the road thought he had been killed or seriously injured,” reported The Times.

Two days later the New-York Tribune reported on his progress, saying he “was somewhat better this evening.  He is at his country place [in Hempstead, Long Island] where he was taken after his accident, which resulted in concussion of the brain and a number of painful and severe contusions.”  Cameron’s doctor warned that it would be some time before he could hunt again.

W. Scott Cameron and his wife enjoyed a happy marriage; at least for several years.  In 1903 a daughter, Rhoda, was born (later described by The Sun as one of the “Dainty future leaders of New York Society”).  They would sometimes stay at the East 38th Street house, as was the case in the spring of 1906 following their returned from Europe while the Hempstead “cottage” was prepared for reopening.

By 1909 Julia Cameron had exchanged carriages for automobiles; but her early experiences were not pleasant.  In March that year her chauffeur lost control and smashed her motorcar.  Julia was not hurt in the collision; but would be less fortunate nine months later.

On December 2 The Sun ran a headline reading “Mrs. Cameron in Smashup.”  Once again her chauffeur, Frank Gilvey, lost control and this time ran into a wagon at Madison Avenue and 38th Street.  Julia was cut by flying glass.  The New-York Tribune reported that Gilvey “was arrested charged with reckless driving” (he protested that the steering apparatus was out of order); but The Sun noted that first “he was permitted to take Mrs. Cameron to her home.”

Julia Cameron had filled the mansion with antiques and works of art; but as with all wealthy homeowners, it was a work in progress.  When the highly-publicized auction of the Havemeyer estate was held in November 1914, Julia was there.  She purchased a Louis Quinze cabinet for $305 (more in the neighborhood of $7,330 today).   The Sun described it as “of French parquetry, with elaborate mounts and ornaments of gilt ormolu.”

While Julia was shopping for antiques, her son was dallying with women.   In 1919 Rosalie left Walter and a year later testified that “she and her husband lived happily till 1911 when he began to show attention to other women.”  She also “told of many instances in which he cursed and reviled her in the presence of others.”   Rosalie was granted a divorce in 1920.  She was given custody of Rhoda and an allowance of $14,000 per year.

Julia was, perhaps, a bit shocked when her son sued “to partition his father’s real estate.”  As a result of the law suit again his mother, the accounting of her estate following her death on February 12, 1931, included a $591,903 debt to Walter.  Nevertheless, Julia Cameron left the bulk of her nearly $5 million estate to him.  Somewhat ironically, a year later the 59-year old Walter Scott Cameron died suddenly on July 12 of septic pneumonia.

On February 8, 1935 Julia’s estate leased the house to Mr. and Mrs. Herbert Witherspoon.  For the first time in over four decades the house was the scene of a debutante reception.  In November the Witherspoons hosted the event for the daughter of Mr. and Mrs. Arthur Bergh, Jerry Bergh.  It would one be the last of high-end social events in the house.

In 1937 the former mansion was converted to two apartments per floor; except the parlor floor which became one expansive apartment.   Over the next few years residents would include Captain Corliss Hooven Griffis who spent six months in a German prison, prompting him to write the 1924 What I Learned in Germany; and author Frances Winwar who penned the biography of George Sand entitled The Life of the Heart.  In 1965 the house was being described as an “11 family apartment house.”

Then in 2010 No. 31 East 38th Street was purchased for $7.45 million by the arcane Catholic organization Opus Dei.  Scandalized by what it considered an inaccurate portrayal in “The Da Vinci Code,” the mysterious group promised the house would be used “as a residence for women where they would be offered philosophical, theological and spiritual guidance.” 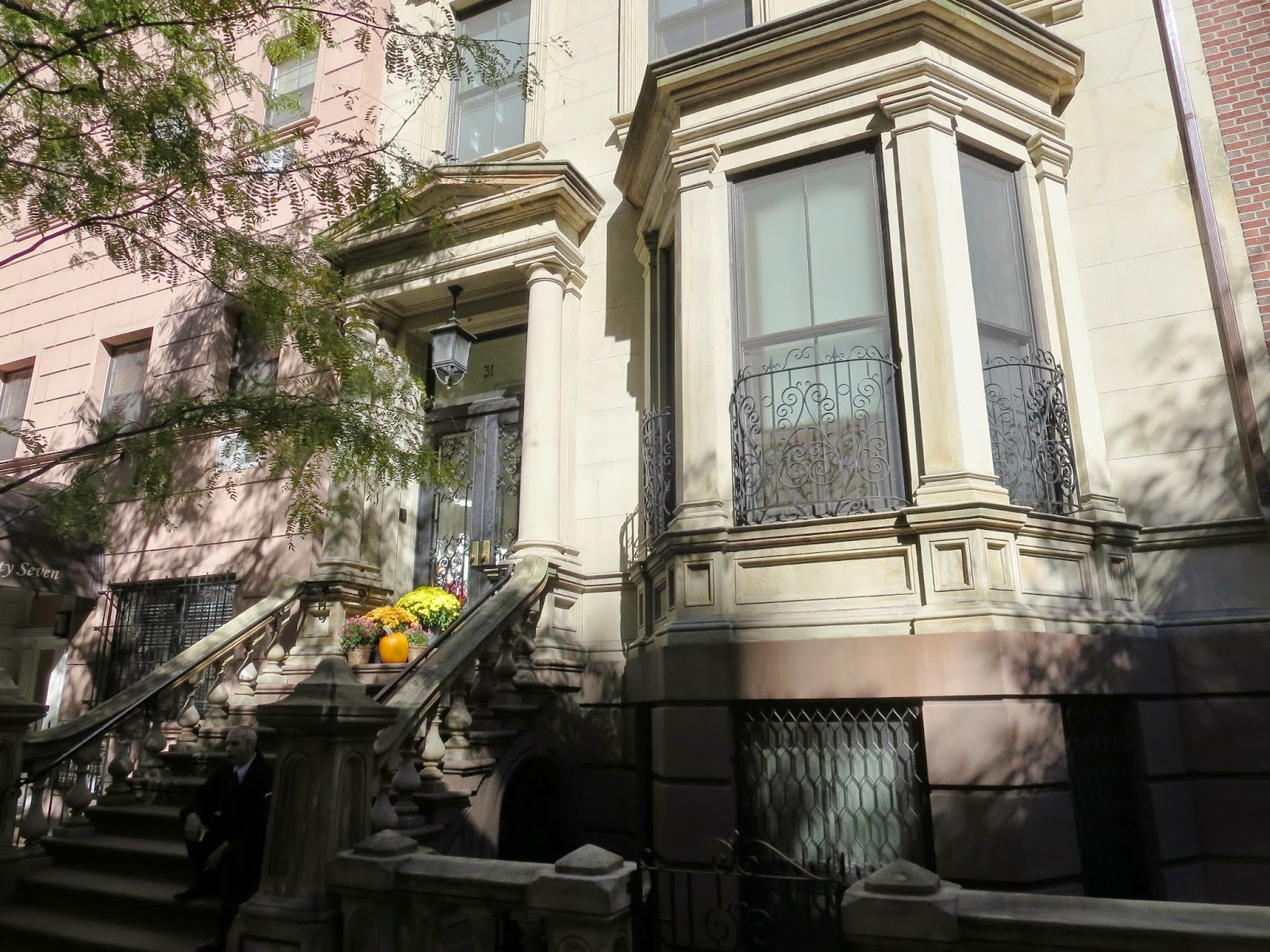 Two years later the 28-foot wide house was reconverted to a single family house.   Although W. R. Grace’s bronze mayoral lamps have been lost; No. 31 is surprisingly intact--a handsome survivor of a time when Murray Hill’s residents were among the city's most prominent.

non-credited photographs by the author
Posted by Tom Miller at 3:11 AM