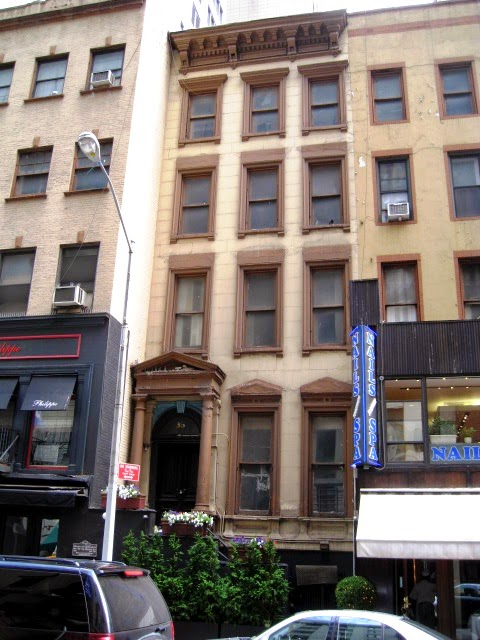 As the Upper East Side building boom of the early 1870s forged on, the block of East 60th Street between Madison and Park Avenues saw the rise of a long string of Italianate rowhouses along its north side.  Typical of rows erected by developers like brothers David and John Jardine, they were four stories tall above an high English basement and clad in brownstone.

Like scores of other homes being built simultaneously, they featured the expected architectural details of the style—pediments above the parlor floor openings, Doric-columned porticoes that sheltered double-doored and arched entrances, and high stone stoops.

The homes attracted respectable, upper class owners.  Among them was former U.S. Representative William Augustus Darling, who purchased No. 35.  Born in Newark, New Jersey in 1817, his was a diverse life.  He began his career as a clerk and later was involved in the wholesale grocery business.  He was director of the Mercantile Library Associated and served eleven years in the National Guard.  Darling was nominated to Deputy Receiver of Taxes in 1847 and held the position through 1854.

He was then President of the Third Avenue Railroad from 1854 until 1865, when he was elected to Congress.  Following his two-year term, he ran for mayor of New York City.  The New-York Tribune, on November 25, 1856, commented on his popularity.  “We have not met one Republic objection to William A. Darling.  He represented our City in the last House, and did it to such general acceptance that, while our general vote in the City was 4,000 less in 1866 than in 1864, his vote was increased [by over 2,000 votes].”

Darling’s first wife, Eliza M. Lee, had died at the age of 35 on November 14, 1853.  His second marriage ended tragically as well.  The New York Times said, on reporting Eliza’s brother’s death in March 1890, “William A. Darling…successively married [Lee's] two sisters, both of whom are dead.”  Prior to moving to the East 60th Street house, the Darling family had resided at No. 96 Lexington Avenue.

By 1880 the Darling children were coming of age and on April 28 that year daughter Henrietta Webb Darling was married in the First Baptist Church, at the corner of Park Avenue and 19th Street, to Frank Overton Evans.  The New York Times noted that the wedding “called together a brilliant array of the representatives of our best society.”

Three years later, on Saturday January 13, 1883, Remsen Darling married Julia Augusta Walton of Brooklyn.  The Brooklyn Daily Eagle was impressed that “a pleasant feature was the unusual clearness with which the bride and groom uttered their responses.”

By the time of Darling’s death in 1895 he had moved to No. 80 East 72nd Street.  The row of homes along East 60th Street was still filled with well-to-do families and No. 35 East 60th Street became the home of retired merchant and real estate operator Henry Korn.  The aggressive developer erected speculative store and loft buildings, many of them replacing the old brownstone homes of lower Fifth Avenue and Broadway.

Korn and his wife, Fannie, had five children and the house would be the scene of the marriage of one of them, daughter Grace, on December 30, 1902.  After their honeymoon Grace and her husband, Felix Hessberg lived in Boston.  When Grace’s brother Raphael was married at Delmonico’s five years later, The New York Times noted that “there were about 300 guests.”

On October 21, 1912 Henry Korn, called by The Real Estate Record & Builders’ Guide “a large owner of real estate,” died in the East 60th Street house.  He left an estate of just under $400,000; equal to approximately $8 million today.

The following year Dr. Henry Herman and his wife Eleanor moved into the house.  Dr. Herman was a member of the Jewish Protectory and Aid Society and Eleanor, interestingly enough, was a breeder of Pomeranian puppies.  The Hermans were followed by Dr. William Cowen in the house.  He was an ophthalmologist and member of the American College of Surgeons.

In the 1920s, when the sidewalks of East 60th Street were widened, the stoop to No. 35 was turned to the side.  By now many of the old homes along the row were being converted to business but, other than the doctor’s office in the basement level, No. 35 survived relatively unchanged.  Dr. Cowen remained in the house until the early 1930s.  In 1936 it was converted to what the Department of Buildings described as “furnished rooms.”

Throughout the rest of the 20th century what remained of the original row became nearly unrecognizable as former homes.  Yet amazingly No. 35—while suffering humiliating abuse—retained its residential appearance.  Today the portico, standing on paneled blocks, survives, as does the arched entrance and late Victorian double doors.  The carved brownstone frames of the windows along with their miniature brackets survive; although the pediments of the parlor floor and the lintels above have been lost.  A close look at the second floor windows reveals that even the interior shutters are still in place.

The architecture of the old Victorian is not remarkable, and its once-proud façade has suffered much abuse.  Yet its nearly-intact survival on the busy street makes the Darling house exceptional.