Murdock was born in 1810 in the small town of Carver, Massachusetts, near Cape Cod.  His father was an ironware manufacturer who had gained both wealth and prominence in the community.  But when his business failed, things changed for the young Uriel.  Decades later The New York Times would say that because of his father’s bankruptcy, “the ordinary schools of that section became the sole educators of the boy.”

Uriel eventually joined his father.  He pioneered the making of pig iron by using anthracite coal, turning the company’s financial problems around.   Murdock moved to New York City and amassed his own fortune in the importing of iron rails, gleaning a 200 percent profit on the shipments.  Young and wealthy, in 1829 he married Maria Louisa Lewis, a descendant of Francis Lewis, a signer of the Declaration of Independence.  The couple lived at No. 31 Clinton Place and would have two sons and two daughters: Francis, Alice, Lewis Champlin and Ada.

In 1853 he spent $40,000 on a fine new home at No. 313 Fifth Avenue, near the southeast corner of 32nd Street and just a block south of the Astor mansions.    The Times called it “then one of the furthest up-town residences on that avenue.”  The price of the house, documented by The Evening Post Record of Real Estate Sales in Greater New York years later, would amount to about $1.2 million today.

The Murdock house was a commodious 28-feet wide.  Four stories high, it had the expected high stone stoop and, like other Greek Revival and Italianate rowhouses appearing across the city, forewent the dormers of the now-passe Federal style in favor of short attic windows.  Seven years after moving in to the brownstone home Uriel Murdock became President of the Continental National Bank.  He remained in that position for ten years, retiring in 1869 to what The New York Times deemed “private life.”

By now Manhattan’s wealthiest citizens flocked to fashionable summer resorts like Newport for the summer season.    Murdock chose breezy Southampton, Long Island, where other millionaires like Charles Atterbury and Louis Siebert had already begun a "colony."   In 1875 he paid $60 for five acres of land; adding more land to the estate in 1880.  The Murdock family would spend their summer seasons in the Southampton estate for decades.

If Uriel Atwood Murdock had been educated in “ordinary schools;” his sons would not be.  Lewis and his brother Francis, called Frank, attended Harvard.   The differences in their privileged upbringing as compared with their father’s was evidenced in their club memberships.  Uriel was content with a single social membership—in the New England Society.  Lewis enjoyed the clubbier scene, holding memberships in social clubs like the New York Athletic Club and the Meadow Club of Southampton.

On July 5, 1901 Uriel Murdock died in the Southampton house at the age of 91.  The New York Times reported that “His death was sudden and due to a general collapse, aggravated by the heat.”

By the time of Murdock’s death, the Fifth Avenue neighborhood had drastically changed.  The march of mansions had reached No. 313, engulfed it, and then moved on.  The looming Waldorf-Astoria Hotel sat on the site of the Astor mansions and Murdock’s moneyed neighbors had migrated north; leaving their once-fashionable homes to be converted to businesses if not entirely replaced.

Within the year the Murdock family, too, abandoned the old family home.  In November 1902 The Evening Post Record of Real Estate Sales reported that they had leased the “four-story and basement brownstone-front dwelling” to Fishel, Adler & Schwartz at an annual rental of $12,500 net.”   The publication noted “It is understood that the lessees will spend about $20,000 in remodeling the premises for business purposes.”

The concerns leasing the old mansions were all high-end businesses—merchant tailors, dressmakers and art galleries, for instance.   Fishel, Adler & Schwartz was a highly-respected gallery known for exhibitions of modern American and European artists, like Claude Monet.

Among Fishel, Adler & Schwartz’s renovations was the removal of the stoop and, inside, a “sky parlor,” where large exhibitions could be held.  A two-story extension, it was lit by a vast skylight.  It was here in January 1904 that portraits and small landscapes by Wilhelm Funk were hung.   The art critic of The New York Times commented on various portraits, including one of vaudeville artiste Fritzi Scheff, known to “the outside world” as Baroness von Bardeleben, and “the seated likeness of Mr. William C. Le Gendre of Brown Brothers.”  The journalist was taken with the portrait, but not necessarily with the choice of clothing for the poser.

“He is in walking dress, and on the table  by his side is that ugly adjunct of man’s city garb, the black top hat; yet so managed as not to be offensive in the picture.”

In December 1906 the gallery offered unusual subject matter—Native American portraits.  J. H. Sharp’s exhibition featured over 30 paintings “devoted to the delineation of Indian life.”  The Sun opined, on December 17, “The best realized of the series is No. 10, ‘Gray Day—The Visit.’  It is discreet and has an out of door atmosphere. The heads of the Indians are hard and not set forth in a particularly pleasing quality of paint.  Mr. Sharp has been a close student of his subject.”

Although Fishel, Adler & Schwartz had entered into a 21-year lease; the sudden death of Abraham I. Adler early in 1908 ended it.  On April 8 “in accordance with the wishes” of Adler, a two-day auction of the inventory was begun.  The first evening’s sales amounted to $10,434.30; including paintings by Dutch artist Bernard de Hoog, and landscape painter Mesle.

In October that year several publications announced that the piano and organ manufacturers Mason & Hamlin had purchased the renovated house.   Someone changed his mind, apparently; for instead the company signed a 21-year lease.  The Record and Guide, on October 31, noted that the firm “will use it for its own business.”

Mason & Hamlin’s move was part of a trend as piano and organ firms left Broadway and Union Square for Fifth Avenue.  Within a year the Sohmer Piano Co. would take the ground floor of the new 11-story structure next door at No. 315.

Like other piano firms, Mason & Hamlin staged recitals to showcase its instruments.  While some, like Steinway & Sons, had actual concert halls; Mason & Hamlin made do with less imposing accommodations.

When the United States entered World War I the piano company pitched in by selling Liberty Bonds.  On October 19, 1918 The Literary Digest noted “In the window of Mason & Hamlin, 313 Fifth Avenue, John Ward Dunsmore strikes a novel note with his picture of President Wilson alone in his study and its Liberty-bond message ‘Light His Worries.’”

As Mason & Hamlin’s 21-year lease drew to a close in February 1929, the Murdock family finally decided to sell.   After more than three quarters of a century since Uriel A. Murdock bought the property, the family sold it to real estate operator Joseph F. A. O’Donnell for $350,000.   O’Donnell was prompted to buy the old building by the announcement of the coming Empire State Building a block away.   He told reporters that “he made the purchase in contemplation of higher values on lower Fifth Avenue which he said would result from the improvement of the Waldorf-Astoria site.”

O’Donnell was on target regarding the rising property values.  Two weeks later he resold No. 313 for what The New York Times called “a substantial profit.”  The buyer was perhaps more surprising to real estate dealers than the rapid resale—The Murdock Realty Company.

Once the center of expensive hand-made gowns and imported artwork; the neighborhood filled with textile firms in the 1930s.  In April 1936 the Carolina Manufacturing Company took the store and basement.  The company was a wholesale importer of two widely unrelated items—linens and carpets.  Three decades later its executive offices were still in the building. 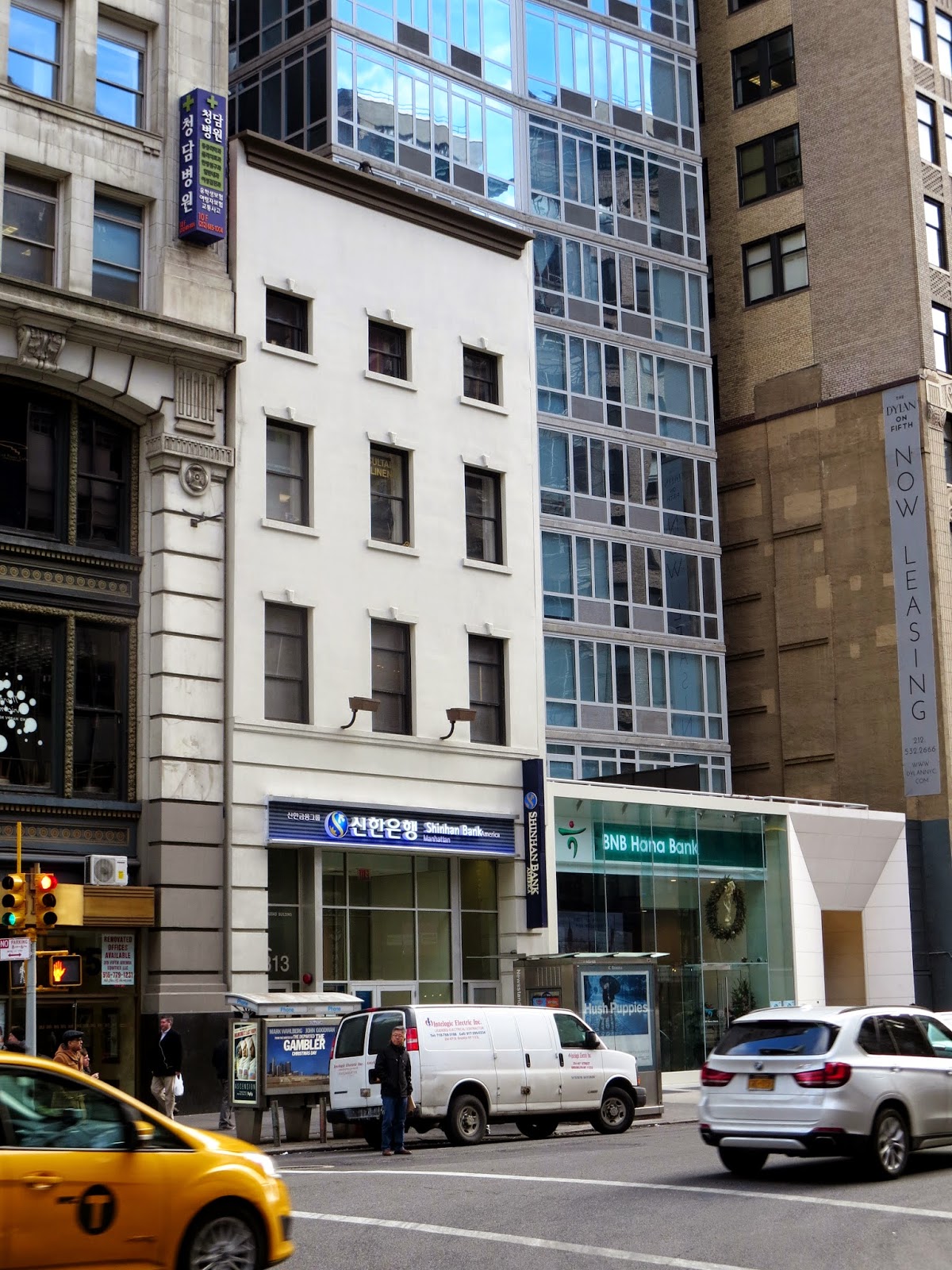 Today former English basement and parlor level of the Murdock mansion give no hint of its residential past.  A bank operates out of the combined two-story tall space with its sleek glass and stainless steel façade.  But above, the lone survivor of the area’s glory days drops the disguise.  Even painted gray, the keystoned lintels, the sills and the original attic openings betray the building’s early history.