As the turn of the last century approached, Greenwich Village was no longer the sleepy hamlet it had been 75 years earlier.  The bustling riverfront and the many small industries of the Village’s western sections attracted working class families into the area.  In the last decades of the 19th century many of the small brick homes were demolished to make way for tenement houses.

As West 4th Street changed, Ephraim Howe remained in his handsome home at No. 228 West 4th Street.  Howe was a direct descendant of John Howe who arrived in America on the Mayflower.  He had made a substantial fortune in the distillery business and was a prominent member of the Produce Exchange.  Resisting the changes in his neighborhood, he lived on in his refined home until April 8, 1896 when he died there at the age of 85.  Ephraim Howe’s considerable estate was reflected in his gift of $40,000 to Tufts College for the erection of a new building.  That single bequest would amount to about $1.14 million today.

On September 16, 1899 The Sun reported that the estate of Ephriam Howe had sold “the old building” at No. 228 West 4th Street “to a builder.”  That builder was the Herter family, which not only operated the Herter Realty Company; but the architectural firm of P. Herter & Son as well.  Peter J. Herter designed a five-story brick and stone tenement to replace Howe’s venerable home.  In doing so, Herter produced his own take on the Romanesque Revival style.

The completed building sat high above a commercial basement.  Herter created a cacophonous façade that is nearly a style book of 1890s taste.  The shockingly steep stoop rose to a dramatic story-and-a-half tall entrance.  As if desperate to use every available decorative element, Herter inserted two classical bas relief panels on either side of the entrance, used alternating colors of brick over the openings, ran terra cotta bands across the face of the building, laid brick in a checkerboard pattern in upper spandrels, added a heavy wreath medallion between the Palladio-inspired second story openings and propped tiny balconies on carved, spread-winged eagles.

But most remarkable were the fanciful mascarons that Herter lavished on the façade.  The bearded faces appeared as laughing or grimacing keystones, as heavy supports to the triangular piers that extended upward along the sides, and as cartwheeling ornaments over the doorway.  P. J. Herter’s quirky design style may not have earned him any awards; but it was doubtlessly a successful marketing scheme.  The over-the-top, somewhat flashy ornamentation was just the thing to attract the blue collar type residents whom the builders targeted. 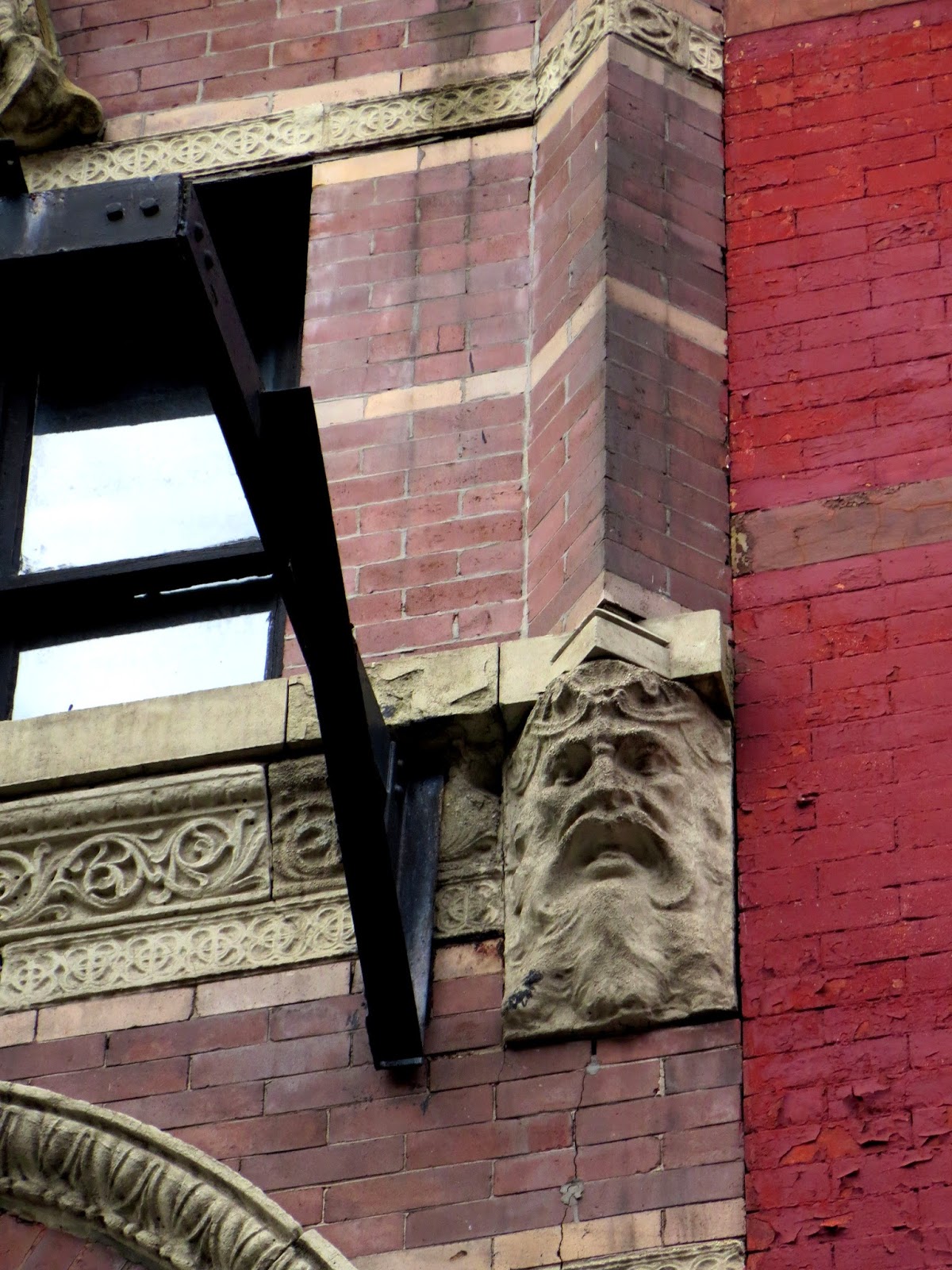 The building was completed late in 1900 and in January 1901 Peter J. Herter leased it to Anna Fahrenholz for two years at $4,000.  When the lease was up, the Herters sold the building.  It was purchased three years later, in April 1906, by well-known real estate operator Joseph L. Buttenwieser.

By the time Buttenwieser bought No. 228, Greenwich Village had become the center of Manhattan’s bohemian community.  Artists, musicians, poets and authors were lured to its winding, charismatic streets.  Among the creative residents of No. 228 in 1910 was Genevieve Almeda Cowles.   Born in 1871 she had an equally-artistic twin sister, Maude.  Genevieve was a well-rounded artist who specialized in mural decoration and stained glass windows.

Although successful in her own right, Genevieve was best known for her cooperative work with her sister.  The women illustrated many books and stories, like the 1899 edition of The House of the Seven Gables, and designed the striking windows in the Honor Room of Grace Church on Broadway.

A resident with a no-so-artistic bent was George S. Vredenberg.  The fire adjuster’s clerk was living here on February 4, 1912 when he found himself in trouble.  A few hours after a blaze was extinguished in the millinery factory building at No. 636 Broadway, a second fire erupted.  Firemen rushed back to the location to put out this fire, which raised the suspicions of investigators.

“Chief Kenlon had a suspicion that the second fire was caused by a cigarette or cigar dropped carelessly by some one of the people who trailed into a building in the wake of a fire,” reported The New York Times the following day.  The chief interrogated one man, whom he found standing around with a cigar in his mouth.  It was pointed out to the chief that the cigar was not lighted.

The Times said that the matter would have probably been dropped had not George S. Vredenberg walked in.  “According to Chief Kenlon, the young man had a cigar in his mouth, and it was lighted.  The Chief turned to Sergt. Pierce, who was standing near by, and ordered the arrest of Vredenberg.”

The fire adjuster’s clerk was charged “with carrying a lighted cigar into a building in which were both people and a vast amount of highly inflammable material.”

Some of the residents in the building were financially comfortable; as was Jesse G. Velie, a silk merchant who lived here in 1914.  Velie was the senior member of the firm Velie & Reiner and was also associated with the Anchor Mills of Paterson, New Jersey.  That year Jesse Velie found himself a member of the jury in the notorious Charles Becker murder trial.  Becker was a vice-detective who had arranged the murder of Herman Rosenthal, an underworld figure who got in the way of Becker’s system of receiving pay-offs.

In the first decades of the 20th century Greenwich Village was famous for its tearooms—intimate, candle-lit spaces, often below ground, where artists and uptown “slummers” gathered.  Resident Herbert Lyson owned one such tearoom, located nearby at No. 163 West 4th Street.  The problem for Lyson on New Year’s Eve 1922 was that he was not serving only tea.  He was serving alcohol.

Prohibition agents raided the tearoom that night, arresting four patrons and Herbert Lyson.  The men were held on $500 bail—nearly $7,000 in today’s dollars.

A few months after Lyson’s embarrassment, Joseph Buttenwieser sold the building for a handsome $80,000.

In December 1933 Prohibition was repealed—a decade too late for Herbert Lyson.  The street level space at No. 228 West 4th Street immediately became home to a bar.  Some policemen would have trouble adjusting to the change.

At 4:34 a.m. on July 13, 1934 plainclothes officer Richard Tilson walked into the bar.  He promptly arrested 39-year old bartender Joseph Spina for “having sold him two drinks” after hours.  The judge released Spina and chided the officer.

“Prohibition is over.  When you have a violation of the liquor laws you can’t just bring in any one who is working in the place.  You’ve got to bring in the proprietor.”

Prohibition was over but the days of Socialist and Communist radicalism were not.  The Government kept an eye on Rafael Reyes who lived in the building for about a decade, starting around 1936.  His name appeared regularly on the published list of “Names and Addresses of the Voters for the Communist Party.”

As the West 4th Street-Christopher Street area lured tourists and shoppers at mid-century, the former bar at No. 228 became a trendy shop.  In the 1950s it was home to Bon Bazar which sold contemporary home furnishings like fiberglass lampshades and mosaic-topped tables.

Through the 1960s and early ‘70s Amron Gallery operated in the store space.  The unusual gallery offered American Indian and Eskimo crafts.  In March 1969 the gallery offered an even more surprising item—Eskimo appetizers.

On March 10, 1969 The New York Times reported on the introductory reception.  “Close to 300 people squeezed into the Amron Gallery…and around the 55-gallon tank of goldfish yesterday afternoon to preview a new collection of Eskimo sculpture, prints, toys and artifacts and to nibble on whale meat in Spanish sauce, Arctic char, and marinated muktuk in mustard sauce…Gallery guests ate whale meat in sea food sauce, too, as they browsed among Eskimo caribou antler carvings and soapstone sculptures.”

By the 1990s the gallery had given way to Jack the Ripper Pub, a horror-themed restaurant; and more recently a more traditional eatery, Wilfie & Nell took over.  In the meantime, Peter Herter’s fantastic tenement façade remains almost unchanged.   A discouraging but necessary fire escape veils the exaggerated detailing; but the whimsical façade is worth a pause in an attempt to absorb it all.

photos by the author
Posted by Tom Miller at 3:00 AM