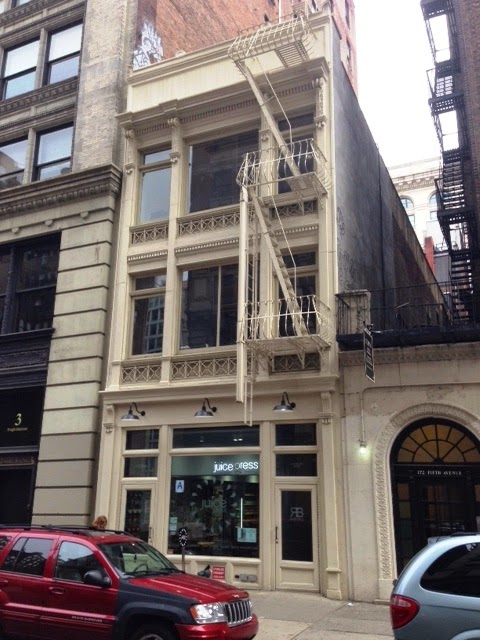 West 22nd Street between Fifth and Sixth Avenues in 1870 was somewhat surprising.  High end residences of the well-to-do graced the block; such as that of inventor Samuel F. B. Morse as No. 5.  And yet just two lots away, at No. 1, and directly behind the Fifth Avenue mansions of some of the city’s wealthiest citizens, was the private carriage house of Benjamin Nathan.

Nathan was a wealthy stockbroker and his stable sat directly behind his mansion at No. 12 West 23rd Street.  That year The New York Times described the house as “lavish to excess” and “one of the most elegant and spacious of the private residences of the City.”  It would become the scene of one of Manhattan’s most baffling and publicized murders.

On the stormy evening of July 28 the 56-year old retired for the night in a make-shift bedroom in the second reception room.  Renovations being done upstairs prevented his using his bedroom.   At 5:45 a.m. his son Frederick was awakened by his brother’s screams for help from the second floor.  He rushed to his father’s room and there on a blood-soaked carpet laid his father’s body, bludgeoned beyond recognition.  “When I stepped up to his body I felt my stocking grow cold as the blood came upon them,” he told investigators.

Despite heavy suspicion that Nathan’s son, Washington, was guilty of the crime, the murder would never be solved.  The Nathan family left No. 12 West 23rd Street.  The mansion and carriage house sat vacant for years, unable to find a tenant because of what newspapers attributed to “unpleasant associations.”

As the turn of the century approached, the once-elegant residential tone of West 23rd Street faded.  Venerable mansions were converted to commercial purposes or razed.  The Nathan mansion and its stable became the offices of Henry Plant’s Southern Express Company in the 1890s; then were taken over by the Adams Express Company.

The United States Trust Company, trustee of the Nathan Estate, announced its intentions to raze the two structures to erect “a modern building on the site.”  It changed its mind when real estate operator Solomon Tim agreed to a long-term lease amounting to over $1 million in December 1903.  On Saturday, December 5 the New-York Daily Tribune ran a headline that read “Million Dollar Lease Recalls the Nathan Murder.”

The Tribune noted “Mr. Tim will make extensive alterations to the property."  Even before he signed the lease Solomon had found a sub-tenant for the two buildings.   Nearby was the store of M. Philipsboro & Co., dealers in “ladies’ suits and kindred articles,” according to the newspaper.  The company also manufactured and imported women’s cloaks.   Tim’s “extensive alterations” would make both the mansion and the carriage house unrecognizable.

The 23rd Street building was given a cast iron façade appropriate to the high-end emporium.   The carriage house behind it was razed and in July 1904 architects Schickel & Ditmars were hired to design its replacement.  The firm produced a charming 20-foot wide annex faced in iron, completed only four months later.  While other 23rd Street retail stores used their back entrances for shipping and receiving; the little Philipsborn building created additional store space on the first floor and loft space above.

When the new building was completed in November 1904, M. Philipsborn & Co. signed a 15-year lease with Solomon Tim.  “The building is to be used in connection with No. 12 West Twenty-third-st.,” reported the New-York Tribune.  “The aggregate rental for the two buildings is $650,000.”

The hefty rent payments were due in quarterly installments of $27,500—about $742,000 today.  Two weeks after the lease was signed, the Real Estate Record & Builders’ Guide reported that a three-story extension would be built to connect the two structures.  “There will be steam heat, electric lights and plumbing.  Cost, about $5,000.”  Architect Simeon B. Eisendrath was responsible for the extension.

In May 1905 Solomon Tim transferred title to the two buildings to brothers Louis, Benjamin and Isaac Stern whose massive department store, Stern Brothers, was located just down the block from No. 12 West 23rd.   Although it would seem that the competing Stern Brothers and M. Philipsborn & Co. concerns would make uneasy bedfellows, the landlord-leasee relationship lasted for years.

In March 1910 the new head of Philipsborn & Co. announced “a number of extensive alterations” to the store.  But, he promised readers of the New-York Tribune, “everything is expected to be in full swing by Easter.”  None of the updates seem to have affected the little building on West 22nd Street, however.  “Among the changes contemplated are a number of additional fitting rooms, the enlarging of the alteration department and the installing of a new method for displaying garments which will do away with tedious delays.”  The store’s carriage trade clientele was reflected in its price tags.   A black satin or black peau de soie dress would cost the buyer $30—around $760 today.

But something happened later that year.   By December 1910 the announcement had been made that Philipsborn & Co. was “retiring from business.”  The business was taken over by Rosenbaum & Co. which continued to offer top of the line garments to feminine customers.

The sudden “retirement” of Philipsborn & Co. is possibly explained by the law suit initiated by the Stern brothers against Maximilian Philipsborn in 1914 “for $30,853.70 plus interest for past due rent.”

No. 1 West 22nd Street continued to be leased as a unit with No. 12 West 23rd Street for decades.  In 1917 the Isaac Stern Estate leased the properties to Robins Bros. at $11,000 per year; and on January 15, 1932 Savoy Manufacturing Company took over both buildings, selling “toys, house furnishings and novelties.”


Eventually, after being subservient to the 23rd Street property for nearly a century, the quaint turn-of-the-century building regained its independence.  The upper floors and the store space at street level have been home to a variety of small businesses.   Schickel & Ditmars’s pleasing design is little changed—a near miracle resulting from its small scale and its long-term connection to the commercial building behind it.