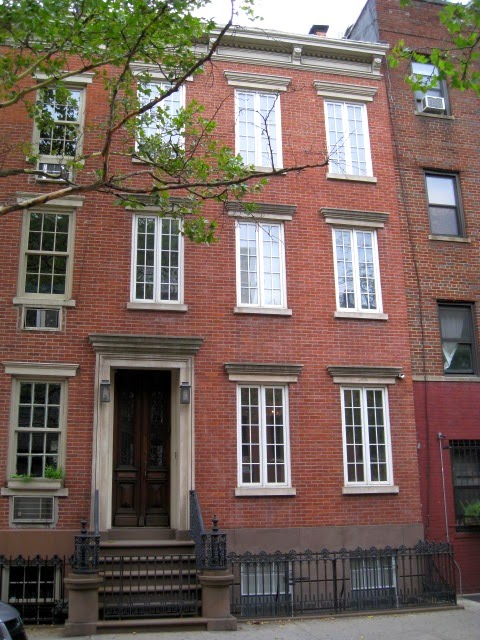 In the 1820s and ‘30s, the farmland north of 14th Street on the west side of Manhattan changed as streets were laid out and avenues extended.  Eighth Avenue was extended northward in 1816 and in May of 1825 the George Rapelje farm—stretching from 16th Street to 18th Street and from Seventh to Tenth Avenues—was dissected into building lots.

In the 1830s brick homes were rising along West 19th Street, at the northern rim of the Rapelje farm.  One of these was No. 362 West 19th Street.  The Greek Revival style was just beginning to nudge out the Federal style and the three-story brick home would reflect many of its elements.  Bold carved stone lintels sat above the openings and a corresponding limestone entrance surround sheltered the recessed doorway.  The rusticated brownstone basement was protected by an iron fence with a Greek key lower border and handsome palmettes along the top.  The sumptuous stoop railing terminated at street level with intricate basket newels perched on brownstone drums. 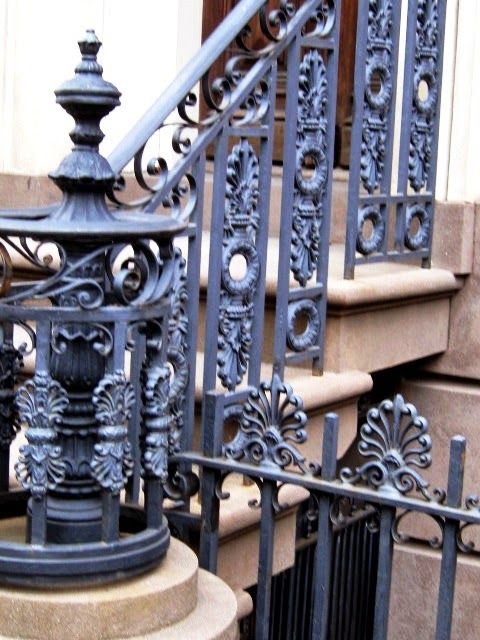 During the first years following the end of the Civil War No. 362 was home to Susan M. Suydam.  The unmarried woman apparently became concerned when she lost contact with her brother, Charles, who had gone to California.  On June 9, 1871 an advertisement appeared in the Daily Alta California newspaper:  “Information Wanted—By Miss Susan M. Suydam, No. 362 West Nineteenth st., New York, of the residence of CHARLES W. SUYDAM.  Address as above or care of Wells, Fargo & Co., San Francisco.”

Sadly, Susan was too late.  The 41-year old Charles’s death had been reported in the San Francisco Call on February 10 the year before.  Susan would live in the 19th Street house at least through 1872.

Meserole’s children opted for show business rather than take up the paper collar trade.  Daughter Fannie was, according to the newspaper, “a song-and-dance artist.”  On March 25, 1885 she married Samuel Lynch who styled himself as a speculator.  “The ceremony was performed by the Rev. T. G. Veitch,” said The Sun, “and the couple went to live at 362 West Nineteenth street, the home of the Meserole brothers, who are acrobats.”

The couple would soon encounter problems.  “Lynch and his new wife separated, and Lynch put up at the Coleman House.  This summer he has followed horse racing,” advised The Sun on July 4, 1887.  But more serious issues would soon take up Lynch’s time.

It seems that Samuel Lynch had neglected to mention to Fannie L. Meserole that he already had a wife, Sadie W. Smith Lynch, who lived at No. 120 East 26th Street.  In July 1887 Fannie’s brother, Charles, did some investigating and “called on Mrs. Sadie Lynch, who informed him that she was married to Lynch on Sept. 4, 1882, by the Rev. George H. Houghton in the Little Church Around the Corner, and that Lynch had deserted her."

Fannie’s infuriated brother swore out a warrant at Jefferson Market Courthouse charging Samuel Lynch with bigamy.  Court Officer Nixon went to the Coleman House and arrested the 27-year old Lothario.  When he appeared in court, despite being confronted by Sadie and Charles, he pleaded not guilty.

The Meserole family seems to have left West 19th Street within the year.  Miss Adelia O’Rorke lived here at least for four years, from 1888 through 1892, while teaching at Grammar School No. 24.  It then became home to Dr. Euphemia Jane Myers Sturtevant, who moved here from No. 302 West 12th Street.

In the 19th century the mere idea of a female doctor was nearly preposterous; yet Dr. Sturtevant was associated with the New York Medical College and Hospital for Woman; and had been Assistant to the Chair of Surgery there since 1883.  In 1888 she became a member of the International Hahnemannian Association.

Founded in 1880, the association had splintered off from the mainstream homeopathic doctors who followed the teachings of Samuel Hahnemann.  He had revolutionized the focus of 18th and 19th century medicine by stressing the importance of proper diet, exercise, improved hygiene and reduced stress.

Although the conventional Hahnemannian doctors forcefully decried the new Association; Dr. Sturtevant and her comrades were convinced of their lofty ideals.  In an editorial in The Hahnemannian Advocate the group said “The work is radically different from that presented in any other National Association, being a consideration of Homoeopathy pure and simple.”

Dr. Euphemia Sturtevant lived in the house at least four years—from 1893 through 1897.  By the turn of the century 18-year old William J. Rogers was here.  The boy was employed as a clerk by Theodore Leneburg, who owned Rennenberg’s Drug Store at No. 103 Ninth Avenue, just two blocks away.  His boss would tell reporters that “Rogers was employed to assist the registered clerk.”  He was authorized to wait on customers and dispense drugs that did not need mixing.

At No. 408 West 16th Street lived the family of street sweeper Louis Caputa.  Mrs. Caputa’s mother, 60-year old Joua Vinca, lived with the family to help with the housework and childcare.  On November 20, 1902 the Caputa’s six-month old son, Joseph, was ill.  Mrs. Caputa sent her 8-year old daughter Jenny to the drug store to get “ten cents’ worth of castor oil  and almond oil mixed,” according to The Evening World the following day.

When Mary returned, her mother smelled the bottle and could detect no odor of almonds, and sent the girl back with her older sister, Mary.  According to The Evening World, William Rogers was on duty and “when told that the oil of almonds had not been mixed with the castor oil said he would fix it.  He did.”

The youthful Rogers made a horrific mistake.  Instead of filling the bottle with castor oil and almond oil, he gave the little girls a bottle of Cyanide of Potassium—a deadly poison.

The following morning the grandmother “poured some of it into a teaspoon and gave it to little Joseph Caputa, after which she took a tablespoonful herself,” reported The New York Times.  “In five minutes both the child and the aged woman fell into convulsions.”  The Evening World described them as being in “frightful agony.”

By the time Dr. James Shea arrived, the grandmother was dead.  The baby was taken to the New York Hospital where he died a few minutes later.

The Caputa sisters took police to the drug store where they identified Rogers as the man who had given them the poison.  “Rogers himself said he had not sold the mixture to the children and had never seen them before,” said The New York Times.  Despite his protests, he was arrested and held at $2,000 bail—more than $50,000 in today’s dollars.

Throughout the first half of the century No. 362 remained a single family house, bought and sold as would be expected.  In 1906 John A. Addison sold it to Louis Schramm; and in 1939 Rose F. McKenna sold it to Anna Taylor.

Then, in 1952, plans were submitted to the Department of Buildings “for altering the three-story and basement brick…into two duplex apartments.”  Those plans were apparently never executed; for in 1959 the house was converted to a triplex dwelling on the basement through second floors; with a separate apartment on the third. 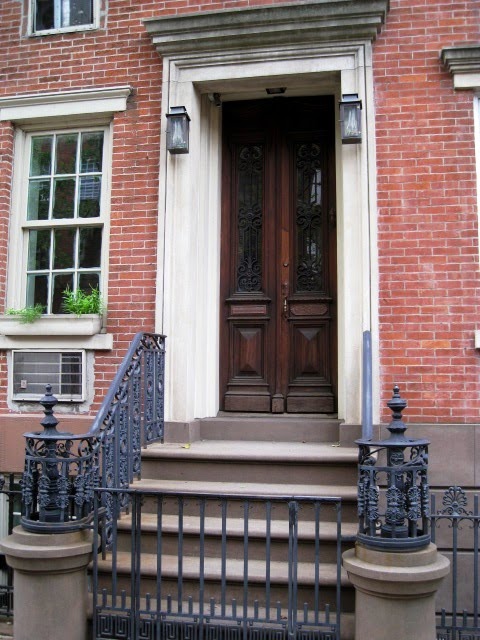 In 2007 the house was re-converted to a single family home.  One real estate critic said “the house underwent a significant renovation…but it was hardly what might qualify as a restoration.”  Perhaps years of neglect forced the owners to do what was essentially a gut renovation; but few traces of the interior details remained.  It was sold not long after for $1.5 million; then was relisted in 2011 for $6.5 million. 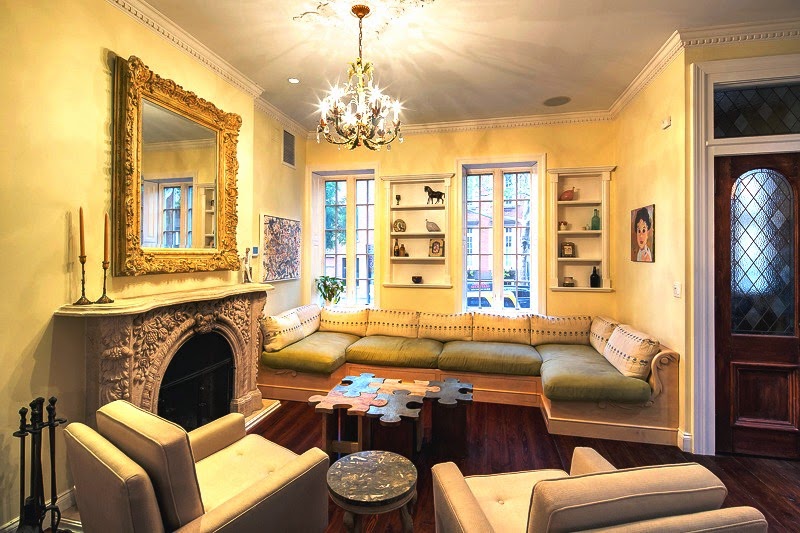 Despite the unfortunate treatment of the interiors, the façade of the dignified townhouse is lovingly maintained.  The replacement windows are quaint, if incorrect; but the wonderful ironwork of the railings and fence happily survive. 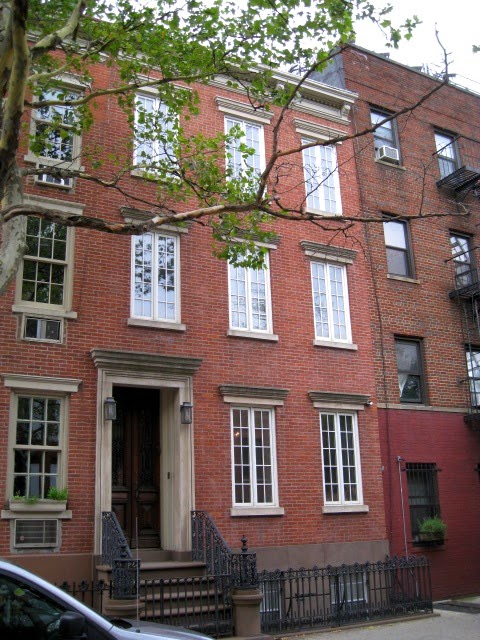