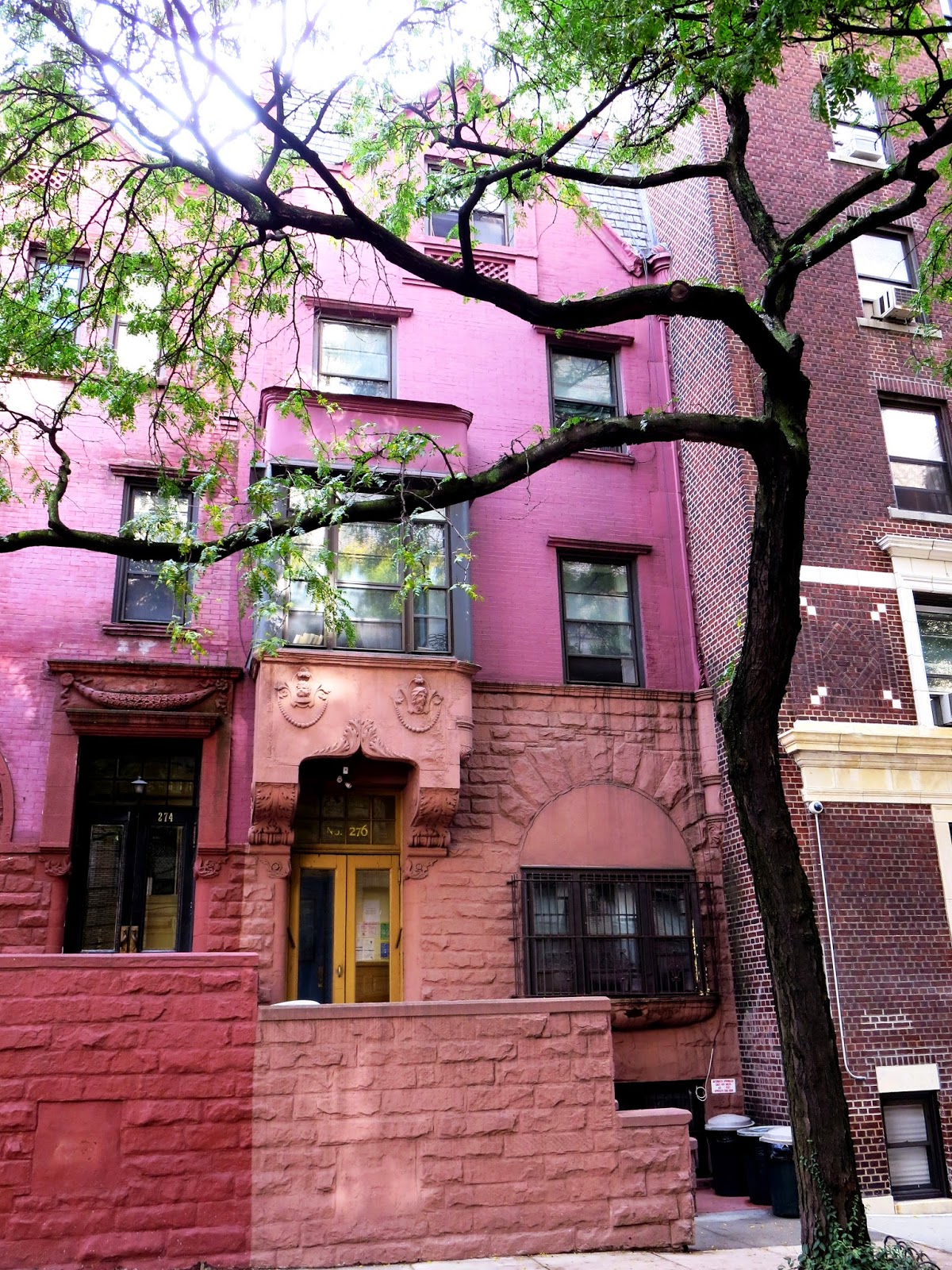 Like a still-proud dowager fallen on hard times, a sadly abused townhouse sits quietly on West 71st Street, overshadowed by a soaring apartment building next door.  Still wearing the few ornaments she has left, it is not hard to imagine her young and beautiful.

Completed in 1887, like its three neighbors No. 276 would stray slightly from pure Romanesque Revival.  A panel below the gable opening of saw-tooth brickwork showed a Queen Anne influence and there were suggestions of neo-Tudor and Gothic Revival thrown in.  The two-story base, including the basement, was clad in rough-cut brownstone that carried on to the dogleg stoop.  A bay window, tucked within a hefty stone arch, featured a stained glass fanlight.    The house stood out with its heavy stone oriel, the thick foliated support of which engulfed the entrance transom.   Here were two charming sculpted portraits of children, looking away from one another and graced by a necklace of carved brownstone.  Above it all a robust gable nearly hid the slate-tiled mansard roof. 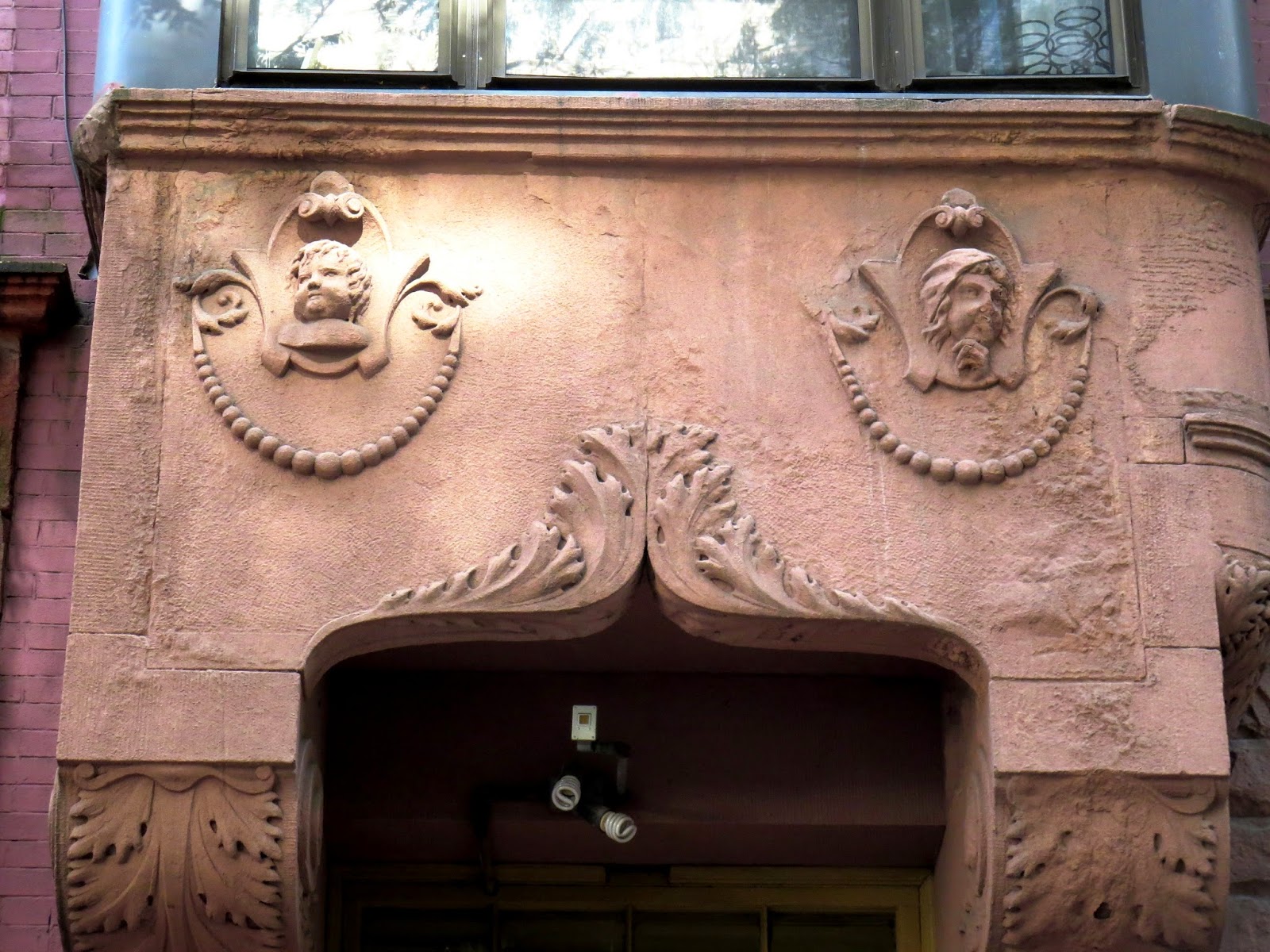 Fonner & Lowther targeted upper-middle class families.  No. 276, completed in 1887, became the home of Robert M. Van Arsdale and his wife, the former Eugenie Humphreville.  Wealthy enough to be included in the Social Register, they both had impressive pedigrees.

An old Dutch family, the Van Arsdales were best remembered for John Jacob Van Arsdale, a young sailor during the American Revolution who would later become a captain in the U.S. Navy.   On November 25, 1783 the last longboat filled with British soldiers left New York Harbor, after occupying the city for seven years.   The date would become known as Evacuation Day and was more highly celebrated than Independence Day for decades.

Before leaving, the British attempted to prevent the hoisting of the American flag over Fort George (now known as Battery Park).  They had removed the halyards so the colors could not be hoisted, then greased the pole for good measure.  John Jacob Van Arsdale tried three times to scale the pole, while General George Washington and his staff looked on.  Finally someone ran to an iron maker and returned with heavy nails and cleats.

With these in his pockets, Van Arsdale started up again with a new halyard tied around his waist.  As he climbed, he drove a nail in—one at the left, then one at the right—until he had reached the top where he installed the halyard.  When he reached the ground Washington and the growing crowd erupted in applause.  The American flag with its 13 stars and stripes was hauled up as 13 cannons fired from the fort.

Every year thereafter, until the early 20th century, a Van Arsdale descendent would hoist the American flag at Battery Park on Evacuation Day.  The New York Times would later remember “In later years the Old Guard would parade down to the Battery, with thousands of residents behind and with detachments of troops from other States taking part.  Several Presidents attended the ceremony.  And always some member of the Van Arsdale family would be there to do his part.”

Eugenie’s family history was as impressive.  The daughter of Thomas Liberty Humphreville and Anna Eliza Oliphant, she was a member of the Daughters of the American Revolution.   She was a descendant of Jonathan R. Oliphant, Captain of the 2nd Regiment of the Burlington Co. Militia Company.  Wounded in battle, his private papers showed that he gave most of his fortune for the cause of American independence.

Robert Van Arsdale was the owner and publisher of The American Engineering and Railroad Journal.  He had begun his career as a staff journalist of the Railroad Gazette in 1875.  By 1881 when he left to start his own publication, he had amassed a small fortune.  Railway Age and Railway Review said “…his use of the first large sum of money, got by frugality and hard work, was characteristic.  He used it all in buying a city house for his mother.  She had always wanted a city house.  Then he saved for himself and bought the publication with which his name has since been associated.”

Now he turned his attentions to a city house for himself and his wife.  While they participated in the expected activities of well-to-do citizens—Eugenie was a member of the New York Peace Society, for instance—the childless couple led an understated life.   Railway Age said he was a “valuable citizen who quietly does his work, with few public appearances.”

One somewhat public appearance for Van Arsdale came in 1895 when he was summoned to serve on a Grand Jury.  The jurymen had a lot on their plate that December.  Judge Cowing mentioned the increasing crime in the city as he addressed them.  “There seems to be an epidemic of crime by violence, such as assaults, highway robbery, and burglary.”

On November 23, 1909 the 61-year old publisher arrived home.   “Hardly had he reached his home and taken off his overcoat when he complained of feeling ill,” said Electrical Review and Western Electrician.   He sat in a chair, talking to Eugenie when, according to The Sun the following day, “he became unconscious and sank to the floor.”  Dr. George H. Mallet was called; but before he arrived Robert M. Van Arsdale was dead.

The publisher was the victim of a heart attack.  Electrical Review later explained that he “had been working hard for months past, and it is believe that overwork was indirectly the cause of his sudden death.”

Eugenie was now 75 years old.   By 1913 she shared the house at least for a while with Blanche Ostertag, who either rented a room or was a companion of the elderly widow.  Ostertag was a sculptress and painter who had studied in Paris.  Among her works was the mural decoration for the New Amsterdam Theater.

As the neighborhood around Eugenie Van Arsdale changed, she lived on in the West 71st Street house.  Many of the 19th century rowhouses were demolished to be replaced by modern apartment buildings while others were converted to apartments.  But the Van Arsdale house remained.

In 1934 a reporter for The New York Times heard of the now-forgotten tradition of a Van Arsdale hoisting the American flag on Evacuation Day—a holiday no longer celebrated.   “Records indicate that up to twenty years ago the lineal descendants of John Jacob Van Arsdale kept the tradition alive,” said the newspaper on November 26 that year.  “Then it died.”

In his attempt to discover what happened to the patriotic tradition, the reporter searched for members of the Van Arsdale family.   He came across Eugenie’s name and visited the house.

“Up at 276 West Seventy-first Street, in a lonely old house near the river, where she has lived more than half a century, is Mrs. Robert M. Van Arsdale.  But Mrs. Van Arsdale is in her 100th year, hard of hearing and bedridden.”

The journalist spoke to a servant.  “'She does remember little things now and then, about the Revolution,’ confided a white-haired housekeeper, ‘but she never said anything about that flag in all the years I’ve know her and I couldn’t ask her now.'”

Eugenie had been his last hope.  “So, it seems, the tradition is dead, and no one quite knows why,” he concluded.

Almost a year to the day following that article, on November 12, 1935, the newspaper reported “Mrs. Eugenie Van Arsdale, wife of the late Robert M. Van Arsdale, passed on at her home, Saturday, Nov. 9.”  On Thursday her funeral was held in the house where she had lived since 1887.

It was, in effect, the funeral for the house as a private home as well.  It was quickly renovated to furnished rooms—three each in the basement and parlor level; four on the second and third floors; while the new owners took the top floor.

The Van Arsdale house is still rented as apartments.  Its brick and crumbling brownstone have been painted, the bay window replaced by flat openings more expected in a reformatory; and the striking stained glass fanlight has been removed and plastered over.  But despite the heartless neglect; Edward L. Angell’s fanciful design shines through.