William Herman Gray’s parents had much to be proud of in their son.  In 1843, at the age of 13, he began work in the hardware business, earning $50 a year (luckily for William he still lived at home—his salary would equal about $32 a week today).    But, according to a later chronicler, “by perseverance and ability he had his salary advanced until he received $1,200 a year.”

Gray’s father was a Scottish immigrant and his mother was of Dutch descent.  The thrifty boy saved enough money to buy them a house on Barrow Street in Greenwich Village.   Then, in 1859, he purchased a small carriage shop at 27 Wooster Street from Major Thompson.    Typical of Gray’s industrious nature, his carriage business grew and prospered until he would eventually erect a large building across the street at Nos. 20 and 22 Wooster.  The Hub would later say that here “he conducted one of the largest establishments of its kind in the city, through which, and by judicious investments in real estate, he amassed a handsome fortune.”

In 1858 Gray married Eliza, the youngest daughter of another popular carriage builder Solomon Banta.   The couple would have four children—three daughters and a son.

In 1866, with the Civil War over for nearly a year, not only would Gray’s carriage business have increased; but the construction workers who had marched off to the South had returned.  That year William H. Gray contracted architect William Naugle to design a fashionable new home for the family.  The block of West 4th Street between Perry and Charles Streets was already home to merchant class families.  But the Gray house would stand out.

Naugle introduced the newly-fashionable French Second Empire style to the block.   Slightly wider than its neighbors, the brownstone-fronted home rose three stories—including the stylish mansard roof—above a deep English basement.    The Gray family announced their presence on the block with an up-to-the-minute mini-mansion.

William Gray filled the house with art.  According to The Hub in 1893, “He was something of an art collector, and took great pride in his fine collection of paintings.”  The carriage trade journal added “In his domestic life he was eminently happy, and although a member of a number of clubs and associations, he enjoyed best his home and family.”
\

Perhaps because of his own scant formal education, Gray was intensely interested in the school system.   He served as a School Commissioner for decades and was a trustee of the College of the City of New York.  It was of little surprise when, in 1878, William Henry Gray, Jr. enrolled for his first year at the City College.

By now William Gray was investing heavily in real estate.  On December 12, 1874, for instance, the Real Estate Record & Builders’ Guide announced that he was “building a five-story brick tenement at 458 W. 18th Street” designed by architect J. J. Howard.

Eight years after Eliza’s death, William married the widow of Thomas Fitzgerald Campbell.   The high esteem in which her well-known father, John Boyd, was held resulted in the name of their only child, John Boyd Gray, born in 1880.

The joy of the baby’s birth was tempered by another funeral in the house that same year.  William’s 84-year old mother died here on Saturday morning, May 1.  The funeral took place at 2:00 two days later.

Gray’s carriage business offered hundreds of vehicles.  The Sun, on November 4, 1889 said “Mr. William H. Gray of 20-22 Wooster street has a great many real English surreys and landaus on hand.  He also has a long line of American-built goods after English patterns.  If you are looking for a good and stylish carriage, and do not wish to spend very much money for it, it will always be worth your while to visit Mr. Gray’s warehouse before making your purchase.”

The newspaper explained that along with the new models, Gray offered reconditioned vehicles.  Its Victorian endorsement smacked of a 21st century used-car advertisement.

“Mr. Gray has on hand nearly 700 second-hand carriages which have been used but little, and so fixed up as to be undistinguishable from new ones.  Mr. Gray bought these in small lots at ridiculously low figures, and is able to sell them at corresponding low prices.”

By the time of William Herman Gray’s death in 1893, the family had moved to No. 210 West 72nd Street.   The carriage business passed to his son, William Jr., who drove the thriving firm into bankruptcy in 1898. 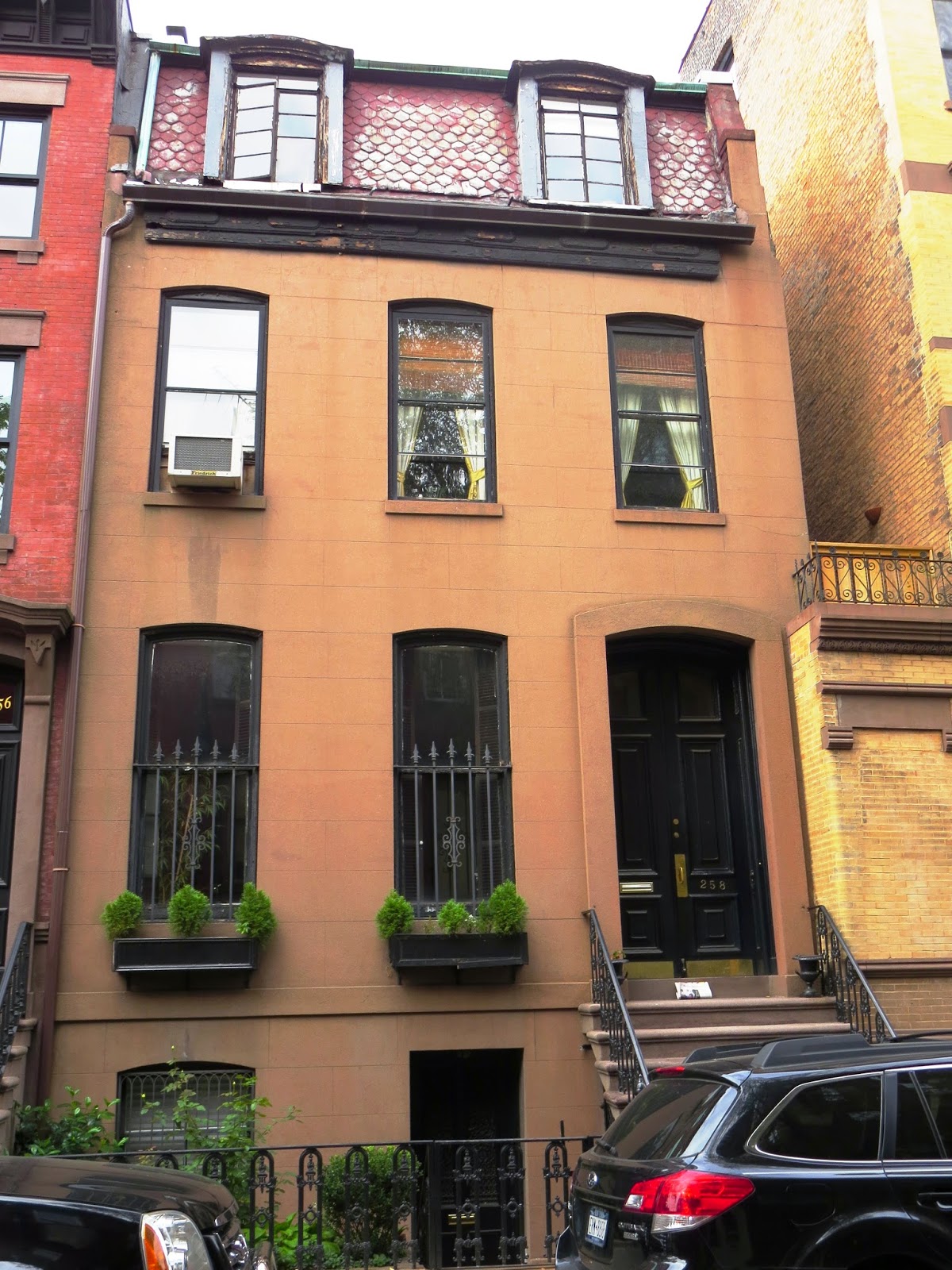 As was the case with many of the large private homes at the turn of the century, the Gray residence was converted to a boarding house.  In 1919 it was owned by Mrs. P. A. Walsh who leased apartments in the building.

Throughout the rest of the century the once-upscale home saw the comings and goings of apartment renters.  At some point, most likely at mid-century, the carved brownstone lintels and the doorway enframement were shaved off in an attempt to modernize its appearance.

Still divided into apartments, there is little left of the 1866 interiors.  Although some elements, like the fishscale tiles on the mansard and the paneled faschia board below the cornice, survive; the house suffers neglect and decay.   Nevertheless, it is a striking example of the development of Greenwich Village in the first years after the Civil War. 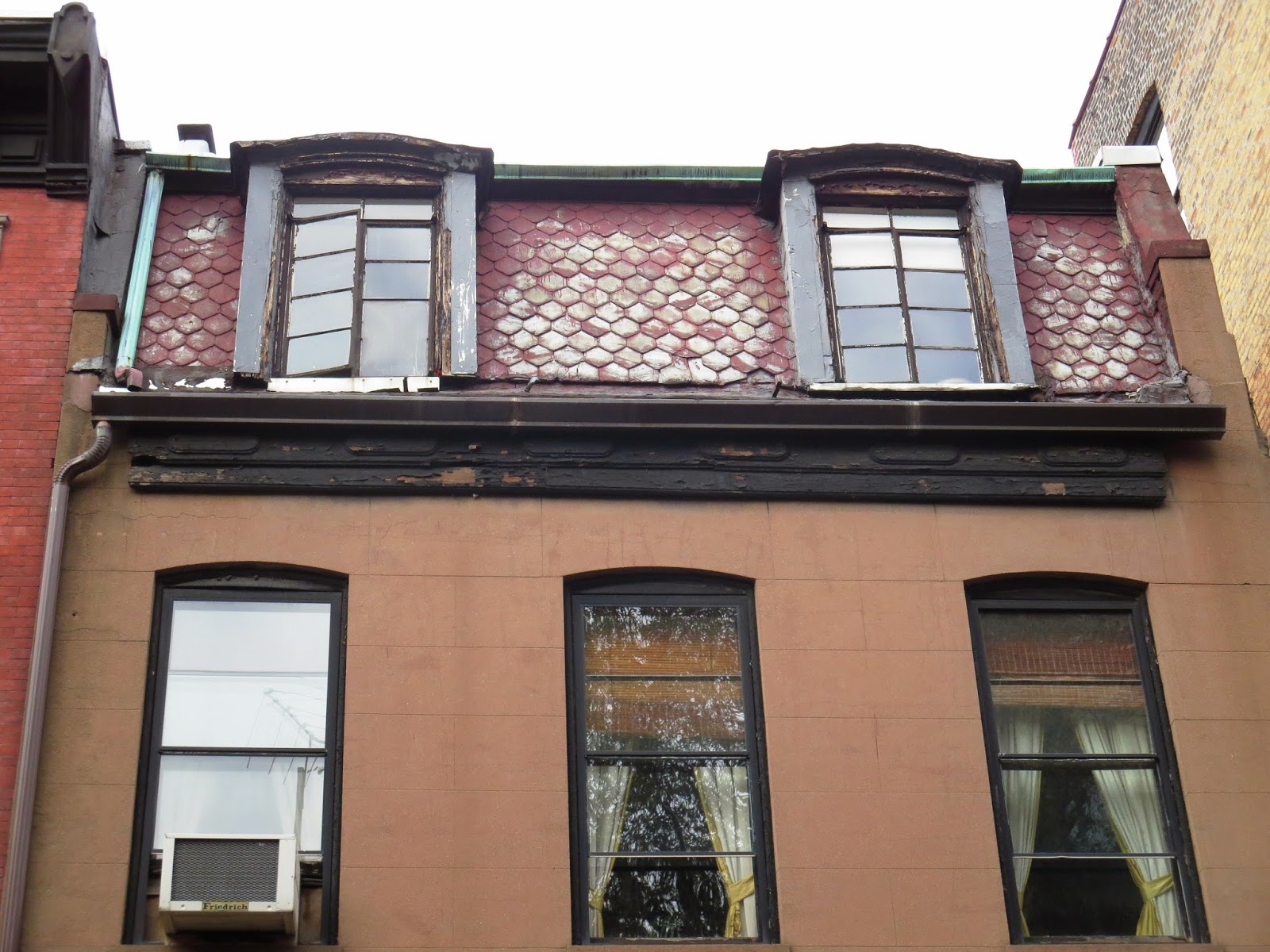 no-credited photographs taken by the author