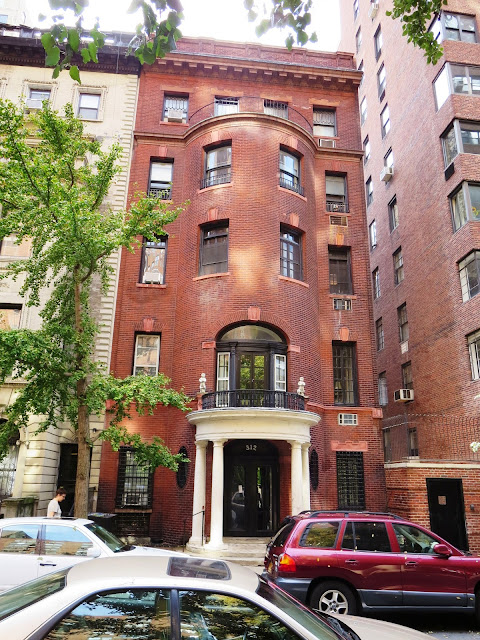 Perhaps most remembered for the lavish mansions he designed on Manhattan’s East Side; C. P. H. Gilbert was equally busy on the West Side during the last years of the 19th century.  In 1897, having just completed the George E.Fahys house next door, Gilbert was at work on No. 312 West 73rd Street.

William Lee Trenholm had purchased the lot from John J. Sutphen on January 18, 1897.  He paid $30,000 for the land—over $800,000 today.  Gilbert’s design for Trenholm would be starkly different from the limestone-fronted Fahy house.   In the late 1890s, taste in residential architectural style was beginning to inch away from European-inspired design as America rediscovered its roots.   The decade had seen the founding of groups like the Daughters of the American Revolution, the Sons of the American Revolution, and the Society of Colonial Wars.  Before long prim neo-Federal and neo-Georgian mansions of red brick with white limestone or marble trim were rising along Central Park.

But the Trenholm house would go a step further.  While the Renaissance Revival Fahy house was decidedly European; No. 312 West 73rd Street drew its inspiration from the early 18th century streets of New England.    Completed in 1898, the house was both somber and grand in its design.   Four stories of the central section bowed forcefully out, creating a spacious balcony at the fifth floor.  Another balcony at the second floor, created by the Doric-columned portico, was accessed by a dramatic arched doorway.  Gilbert used both brownstone and terra cotta for the sparse ornamentation.

In contrast to his severe exterior, Gilbert lavished the interior with heavy plaster ceiling ornamentation in the form of garlands and floral ropes and installed imported marble mantels.  The French-paneled rooms had intricate parquet floors.  Grand spaces designed for lavish entertaining boasted of the owners’ wealth.

Born in Charleston, South Carolina, Trenholm served as a Colonel in the Confederate Army.  Later he was appointed Controller of the Currency under the first Cleveland Administration.

He had moved to New York in 1889, taking the position of President of the American Surety Company.  The same year that he moved his family into the 73rd Street house, he became President of the North American Trust Company.

Trenholm and his wife, the former Kate Macbeth, had eight children.   The mansion was barely completed by the time of daughter Constance’s marriage to Dr. Russell Bellamy in fashionable St. Thomas’s Church on Fifth Avenue.  The high social caliber of the event was evidenced by names in the wedding party, including J. G. Phelps-Stokes, Joseph Frelinghuysen and Allan Robbins.

Following the ceremony, the Trenholms hosted a “large reception at their new residence,” said The Sun on April 21, 1898.  A long honeymoon for the newlyweds was doubtful.   The U.S.S. Maine had been sunk in Havana Harbor two months earlier; and on the day of the wedding Spain severed diplomatic relations with the U.S. as Congress considered its options.  The Sun wrote “The bridegroom, who is Sergeant of the Hospital Corps of Squadron A, may at any moment have his marching orders.”

Less than three years later, on New Year’s Day 1901, William Trenholm contracted the grip, which worsened to pneumonia.  The 65-year old’s condition was serious enough to warrant newspaper coverage.  On January 10 The New York Times reported that he was “slightly improved last night.  During the day Col. Trenholm became worse, but rallied during the evening.”   Russell Bellamy, the young doctor who had married his daughter and went off to war attended him along with Drs. Thornley and Gilman W. Thompson.

It was a short-lived rally.  The New-York Tribune reported that “although [his condition] improved slightly…it changed for the worse again Thursday, and all hope was abandoned.”   Early in the morning of the day following The Times article, Trenholm’s wife and children gathered around his bedside.  Only his son, George, who was at school in Charleston and on the way home, was not present as William L. Trenholm died.  The funeral was held in the house the next day, January 11, at 3:00.

Kate Trenholm left New York and moved back to Charleston into her “fine house at the head of the Battery” as described by The Sun.  The aristocratic Southern woman was highly insulted when her home was raided on April 11, 1903 while other gentlewomen were calling on her.  A South Carolina newspaper said “There was much indignation here to-day when it became known that dispensary constables had invaded the Trenholm home on the hunt for ‘blind tiger’ liquor.”  The newspaper said Kate was “astounded when five rough countrymen called and said they had orders to search the place.  Protests and entreaties were unavailing.”

After their ransacking of the house (The Sun said “They opened wardrobes, scattered clothing and left without finding a trace of whiskey), the constables said that “some grievous mistake had been made in the street number.”   The following day the Chief of the Dispensary made a call on Kate Trenholm with an apology.  The Sun reported “It was not accepted.”

In the meantime the family leased the house on West 73rd Street.   On August 17, 1902 The New York Times had mentioned that it had been taken “for a term of years at a gross rental of $35,000.”  Albert Sanders, a receiver for bankrupt firms, and his wife lived in the house through 1907.

In January 1908 the house was offered at auction, and a year later it was resold by the Mutual Life Insurance Co. to  Sailing Baruch, Jr.  The new owner immediately hired architect J. H. Freedlander to update the residence, “including the installation of elevator service,” as reported in The Sun on September 2, 1909.  The remodeling cost Baruch $15,000.

Sailing was one of four sons of Dr. Simon Baruch, an eminent physician and scientist.   Like the Trenholms, he had Southern roots.  His mother, Isabel Wolfe Baruch, was the daughter of South Carolina cotton planter Sailing Wolfe.  His uncle, financier and political consultant Bernard Baruch, gave his name to Baruch College of City University of New York.

Sailing and his wife had two sons in the house, Donald and Sailing, Jr.  Following Dr. Baruch’s death in June 1921, Sailing’s 72-year old mother—once highly active in music and philanthropy—deteriorated.  The Quarterly Journal of the New York State Historical Society noted “from that time Mrs. Baruch gradually lost strength.”  On November 24, 1921 she died in the West 73rd Street house.

Although he would become president of the Wall Street investment house Baruch Brothers & Co., Inc.; Sailing Baruch was more often in the newspapers for his playboy ways than for more serious endeavors.  On August 13, 1922 the New-York Tribune pointed out that the Baruchs were at the fashionable Paul Smith’s resort in New York and had taken up a new-fangled hobby—home movies.

“Motion picture shows of their own are increasing in favor as a means of entertainment among the campers on the St. Regis chain of lakes and the nearby waters,” said the newspaper.  Some of them hav along movie cameras and are giving jolly little exhibitions of the films they make of their friends in action on the links of the St. Regis River Golf Club and on mountain-climbing trips and other expeditions.”   The Tribune said “Mr. and Mrs. Sailing W. Baruch, of New York, who are here for the season with their sons, Donald and Sailing jr., are first among the members of the cottage colony at Paul Smith’s Hotel to adopt private movies.”
Before long newspapers would be more interested in Sailing’s dating than in his home movies.  The now-single Baruch was fodder for gossip on May 29, 1932 when Nancy Randolph, writing in the Chicago Sunday Tribune wrote “Incidentally, they have even rumored Doris Duke as the wife-to-be of Sailing Baruch Jr.  It may be so, but then, knowing Sailing, a plump, genial and not loquacious young man, we can hardly see the tall and sensible Doris enamored of the about town Sailing.”

The same year that Nancy Randolph circulated the Duke-Baruch rumor, the 73rd Street house was purchased by Celia Frender and converted to apartments—one on the first floor and two on the upper levels.   Frender would retain ownership of the property for three decades, selling it in April 1966 for $140,000.

The purchaser was the unlikely Institute for Human-Animal Relationship, Inc.   The organization, suspected to be somewhat shady by some officials, was described by Attorney General Louis J. Lefkowitz a year later as “a self-styled charitable organization set up to foster understanding between people and pets.”  But the tax-exempt status which the Institute obtained for itself raised Lefkowitz’s suspicions.

An investigation showed that although it had collected $350,000 by December 1968, only occasionally had it distributed “birdseed, bird cages and fish tanks.”  The Attorney General alleged that donations were ending up in the pockets of the Institute’s promoters.  Armed with this evidence, Finance Administrator Fioravante g. Perrotta revoked the organization’s tax-exempt status.
In 1977 the former mansion was converted once again—this time to four apartments on the ground floor and three each on the upper floors.   Charles Pierrepont Henry Gilbert’s highly uncharacteristic structure has undergone some abuse; yet much of the interior detailing survives and the exterior retains its integrity.