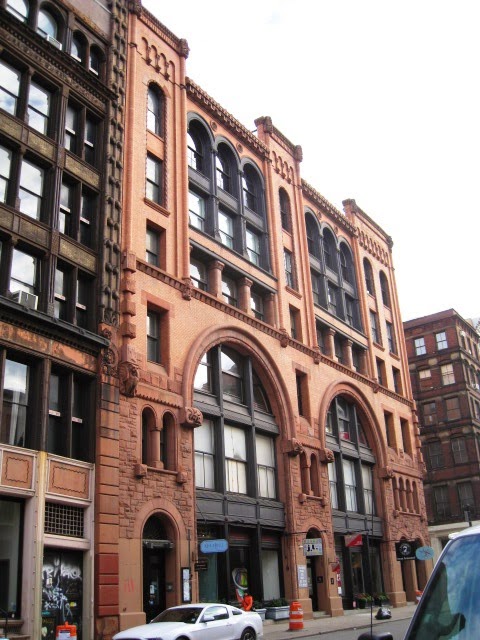 Long before construction on the hulking office and warehouse building at the corner of Broome and Wooster Streets was near completion, it had already been leased.  On September 27, 1890 the Real Estate Record & Builders’ Guide announced that Frederick Southack “has leased for a term of ten years to Fleitmann & Co. the six-story iron and brick building…at an annual rental of $23,000.”

The Fleitmann brothers, Ewald and Hermann, arrived in New York from Germany in 1864.  They established their silk importing business at No. 490 Broome Street.  Now, a quarter of a century later, Fleitmann & Co was among the largest commission merchants in the city.  In addition to the massive building rising on the site of their original store, there were four branch offices in the city.

The Fleitmann building was designed by another native German, Alfred Zucker, who turned to the rabidly popular Romanesque Revival style.   Completed in 1891 it was a fortress as welcoming as it was foreboding.   Zucker challenged the observer to focus on any single component. 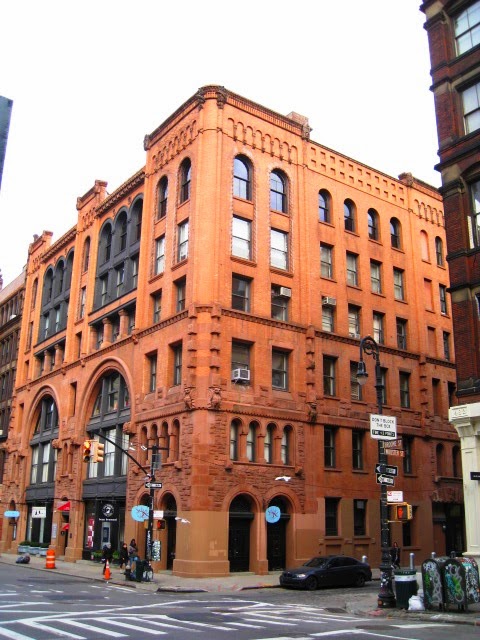 Two yawning, three-story arches at ground level would have stolen the show, were it not for the cast iron-framed groupings of openings at the uppermost floors.  These sat on an arcade of squat engaged brick columns.  The architect put stone carvers to work producing ornamental details—rope carving, rich capitals, and an elaborate stone cornice, for instance—with special attention to the figural sculptures.    These ranged from the tradition faces that served as brackets below the third floor, to the whimsical.   Snarling winged beasts ( some ferocious, at least one looking more like a house cat), shared the façade with serpentine monsters devouring their own tails.

Before Fleitmann & Co. could move in, the unfinished building was sold.  On October 18, 1890 the Record & Guide reported that William F. Weld “of Boston” had purchased the “six-story Tiffany brick front warehouse” for $326,000.  Weld paid the equivalent of $8.6 million today for the structure.

As with its satellite locations, Fleitmann & Co. leased some space at No. 484 Broome Street to related firms.  Later, in 1902, the New-York Tribune explained “The annexes of the firm are occupied by merchants who, trading under their own names and styles, are associated in their dealings in many ways with and financed by the firm of Fleitmann & Co.  These merchants in their respective branches of the trade deal in every conceivable kind of merchandise exploited in the drygoods business—gloves, millinery, specialties, linings, panne velvets, umbrella silks, tailors’ trimmings, tie linings, tie silks, clothiers’ linings, hatters’ satins and trimmings, mercerized satins and a variety of every species of fabric.”

Within the first few years in the new building, tenants would include M. Bloom, who advertised in The Sun on June 14, 1892 for “Experiences Girls wanted on sample cards.”  Others were Max G. Cavalli, “merchant;” William E. C. Bradley, “dry goods merchant;” and Anton I. Quanz, importer and exporter who lived at the Hotel Endicott.

As the turn of the century approached, Hermann Fleitmann returned to Hamburg.  He died there on March 27, 1899 at the age of 74.  Ewald continued running the business, assisted by Frederick T. Herman C.  and William M. Fleitmann.  Henry T. Fleitmann used the address, but he was more interested in breeding Scottish Terriers than in silk goods.

By now the Fleitmann & Co. partners had amassed sizable fortunes and the firm continued to expand.  The New-York Tribune said “No leading drygoods firm in New-York City is more closely identified with the wonderful march and progress of that branch of trade than Fleitmann & Co…As leaders in the domestic lines of drygoods the firm of Fleitmann & Co. is just as universally and favorably known as importers.  While carrying an enormous stock of domestic goods, the firm imports the richest and finest qualities of silks, ribbons, velvets, malines, chiffons, satins, woolens, worsteds, cloaking and broadcloths, the output of the greatest manufactories and the most renowned looms of Europe and Asia.”

Running the massive Fleitmann & Co. building required several large boilers in the basement and a competent maintenance crew.  Charged with the responsibility of maintaining the boilers in 1901 was 50-year old engineer Richard Kruse.   Working with him on April 1 was 28-year old Henry Otten, a “fireman.”

That day Kruse was negligent; failing to notice the rising pressure in one of the boilers.  He was standing near the engine room door when the boiler exploded.  The engineer leaped for the door, landing on the floor outside.  Young Henry Otten was not so lucky.

“The fireman was on the other side of the boiler and not near enough to the door to escape,” reported The New York Times the following day.  “He was flung to the floor, and when found later lay dead within a few feet of where he stood when the cock blew out.”  Otten had been scalded to death by the steam and boiling water.

“The engineer was found outside and arrested by two detectives.  His face and neck were black when he was taken to the station house and technically charged with homicide.”

In 1905, while the Herman Fleitmann family was away for the summer, the “youthful highwayman” known as “Sand Rock” Smith visited their home at No. 42 West 77th Street.  He held up the maid at gunpoint.  The terrifying event caused the Fleitmann’s caretaker to take steps to prevent a similar crime.

In order to make the mansion look lived in, he lit the gas jets in some of the upper rooms before nightfall each night.  It had an unexpected effect.  On the night of September 4 residents in the high-end Manhattan Square Hotel noticed lights on in the second floor.  Knowing the family was away, they feared the house was being looted.  Calls came in to Police Headquarters.

Detectives from the West 68th Street station house surrounded the mansion.  Several climbed over the fence in the rear and up to the roof.   All the doors and windows were locked, so the police broke into the rooftop scuttle.    The cops swarmed through the house, but found nothing disturbed.

“Then a well-disposed person across the street told them that the caretaker had lighted the gas on his usual rounds for the night and that his care had caused the light and the alarm,” said The Times.  The caretaker’s clever ploy to fool crooks backfired, resulting in damage to the house by well-intentioned police.

The following year Ewald Fleitmann died.  In addition to his position with Fleitmann & Co. he was a director in several corporations and banks.  Before long the remaining Fleitmann partners would consider moving from their long-time headquarters.

On January 30, 1912 The Sun mentioned that “Fleitmann & Co. is dickering through Douglas L. Elliman & Co. for a long lease of the store, basement and first two lofts in the building to be erected...at the southwest corner of Fourth avenue and Twenty-sixth street, opposite the [Madison Square] Garden.”  The dickering worked out and Fleitmann & Co. moved into the new Hess Building.

For nearly a year its old headquarters building sat vacant.  Finally on December 13, 1913 the Real Estate Record & Builders’ Guide reported that Kaplan Wood Stock Co. leased the building “for a term of years at a slightly reduced rental.”  The paper noted that Kaplan Wood Stock “operates three large mills in Massachusetts [and] will occupy the building for storage of stock and show rooms after extensive alterations are completed.”

Despite extensive alterations and a lease of “a term of years,” the new tenants did not last a full year.  In September 1914 the 52,000 square foot building was leased to the American Tobacco Company.    The firm stayed in the old Fleitmann building for years.  It was sold in 1946 to the Art Craft Finishers.

As the 20th century drew to a close the Soho neighborhood had become filled with galleries and trendy shops.  The hulking Fleitmann & Co. building followed suit.  Today the sidewalk level houses chic shops, while sprawling residential lofts engulf the upper floors where bolts of silk and “cloaking” were once stored.

non-credited photographs by the author
Posted by Tom Miller at 2:56 AM