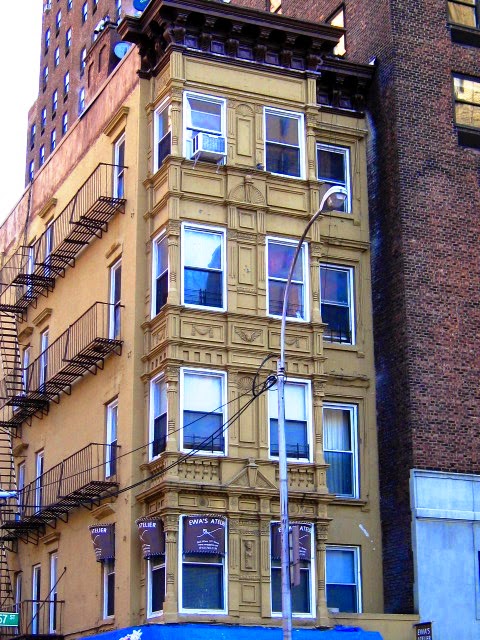 In the 1880s upper class New Yorkers flocked to Central Park to enjoy the open air and landscaped greenery.  But they were careful to avoid the neighborhood that nearly abutted the southwest corner of the Park.  For nearly two decades Hell’s Kitchen had been rife with crime and poverty.   In 1881 The New York Times described the district as “one of the most miserable and crime-polluted neighborhoods in this City” and said “there is more disease, crime, squalor, and vice to the square in this part of New-York.”

By now developers worked to replace dilapidated wooden and brick hovels with tenement houses for the mostly immigrant working class residents of Hell’s Kitchen.  James D. McCabe, in 1882, placed the monthly rent on a tenement apartment at between $10 and $30—a range of around $200 to $600 today.

One of these was a five-story building at the northeastern fringe of Hell’s Kitchen.   Sitting at the northeast corner Ninth Avenue and West 57th Street, it was a mere 20 feet wide on 57th Street; but stretched 100 feet up the avenue.  The residential entrance was centered on Ninth Avenue, allowing for commercial space facing 57th Street.  Called The Salvator it was intended for working class families; but that did not mean it gave up architectural style.

The designs of British architect Charles Eastlake had reached New York by now.  He preferred angles and corners to the rounded arches and bulbous balconies of a generation earlier.  The Salvator’s 57th Street façade embraced Eastlake’s ideas—most notably in the protruding bay that rose the height of the building.  While the brick elevation of Ninth Avenue was relatively unadorned—there were carved pediments and a pretty pseudo-balcony above the entrance—the cast iron 57th Street façade was a riot of ornamentation.  Most likely all chosen from the foundry’s catalog, there was a sedate female face, a winged cherub’s head, festoons and fans.  The appearance of the Salvator announced that even tenants with little means could have dignity.

The Salvator however, fell short of its promise.   Owned by Martin Mahon, the proprietor of the New Amsterdam Hotel, he kept an apartment there in addition to his suite at the New Amsterdam and his house at No. 74 Irving Place.  The Salvator apartment, it later became clear, was to keep his trysts secret from his wife.

Prior to 1896, Mahon sold The Salvator to  C. E. Johnson, a tailor, and his wife, Fannie.    Johnson ran his tailoring shop in the 57th Street store while Fannie ran the apartment house.  Many tenants, it appears, rented by the month rather than the year.

Martin Mahon retained his apartment in the building.  He later testified that the Johnsons “mortgaged it for $55,000, and he collected the rents and helped pay off the interest.”  Mahon denied that he used his out of the way pied a terre for scandalous meetings; yet “he admitted that he had met many young women there, and they had played and sang for him.”

Trouble for Mahon began when William A. E. Moore and his wife, Fayne Moore, took an apartment.  Moore was a conman and thief and his accomplice wife was attractive.   A dalliance between Mahon and Fayne Moore came to light after her husband was convicted for theft and assault, and she was on trial for first degree robbery.

Jurors heard that Fayne Moore “had often sang and played for him” and that ten weeks before the trial, in December 1898, she had asked for his $20 diamond pin.   The 43-year old Mahon testified that he called on Mrs. Moore five times at The Salvator.  “I told her I was married, but I liked her company and tried to keep it,” he said.

An attorney asked “Had you an honest purpose in visiting that girl at Mrs. Johnson’s?” and Mahon insisted “My purpose was honest.  I liked to hear her play and sing.  I never knew the class of people who went to Mrs. Johnson’s, but I believe they were respectable.”

Fayne Moore’s singing and playing must have been quite extraordinary.  The New York Times reported that while on the stand “Mahon continued that he had taken Mrs. Moore driving, to the theatre, and to dinners; that once he gave her a piano and on another occasion had loaned her $15 at Mrs. Johnson’s.  He had let her take his diamond pin, and later loaned her a bracelet of diamonds and sapphires, which she told him she wanted to purchase from him.”

In addition to Martin Mahon, the court case would involve several tenants and Fannie Johnson.  Slurs and accusations were luridly reported in the press as Victorian readers clung to the sensational story.  In the meantime, William and Fayne Moore waited for the outcome in a joint prison cell.  “The Moores spent yesterday quietly in the Tombs, most of the time reading newspapers,” recounted The New York Times on December 12, 1898.

Shortly after the court case, the Johnsons sold The Salvator to real estate operator Charles Kneeland.   Following his death, his widow Adele sold the property at auction in 1901 to cover a $58,430 lien.  Johnson’s tailor shop was now the home of K. G. Carter’s furniture store.

The portion of Hell’s Kitchen around The Salvator was improving, as reflected in its residents.  Artist Jessie Leith was here in 1905 and urologist Albert Goldey lived here in 1918.  Nevertheless, incomes remained low.  John F. Murray was a long-term resident, from at least 1910 to 1919.  A Transit Inspector for the city, he earned $1,320 a year in 1917—about $25,000 in today’s terms.

Real estate men were shocked on March 22, 1919 when Paul Henry Zagat, president of the City Real Estate Improvement Corporation signed a 99-year lease on the aging building.  The aggregate rent was about $1 million.  “The property will probably be remodeled by the new owners,” suggested the New-York Tribune.

Jacob Robert Shapero lived in the building in 1920.  The 32-year old was a 1st Lieutenant in the Medical Department, Dental Section, of the U.S. Army Reserves.   Seven years later the Gaston family would call No. 363 West 57th Street home.  Harry Gaston was 14 years old and on February 27, 1927, an unusually nice winter day lured him and two friends on an adventure.

Harry and brothers John and George Conway, 14 and 12 years old respectively, set off to Pelham Bay Park.  Pre-planning was apparently not their forte; for they left with enough money to get to the park, but did not have the 15 cent fare for the subway home.

“The boys saw an automobile standing with others in front of Kane’s Pelham Bay Inn, and instantly their transportation problem was solved to their own satisfaction.  The three got into the car, the elder Conway boy took the wheel and off towards Manhattan they sped,” reported The New York Times the next day.

The car’s owner, Eugene Wager, heard the engine start up and ran outside just in time to see it disappearing around a corner.  He borrowed another car and gave chase.   Wager tried for two miles to catch up to his automobile; all the while afraid that there were armed crooks inside.

The chase played out like a scene from a silent movie.  At East Tremont Avenue and Eastern Boulevard, Patrolman Campbell jumped on the running board of the car Wager was driving.  A little further along Patrolman Tiedemann jumped on as well.  Half a mile later young Conway realized he was being chased by the police and pulled over onto a side street.

“Then, to the amazement of Wager and the two policemen, instead of armed men alighting, they saw three youngsters in short trousers pile out and run.  Campbell fired a couple of shots in the air and the fugitives halted.”

The would-be car thieves spent the night in the Children’s Society.

It was apparently Zagat who rescued The Salvator when the row of similar structures along the 57th Street block was razed for the hulking Henry Hudson Hotel in 1929.  The lone survivor suddenly took on a very skinny appearance.  Thirty-two years into the 99-year lease, Eugene H. Zagat purchased No. 363, in June 1951.  The Times described it as “consisting of fifteen apartments, a professional office and six stores.”

In 1961 Lou’s Corner Bar was in the ground floor space.  In an incident recalling the Hell’s Kitchen days of the 1880s, 35-year old Joseph Griffin met his death there on March 23.  Described by police as “a hoodlum with a long record,” he sat at the bar unaware of a heavy-set, six-foot assailant approaching from behind.

The man, estimated to be about 35 years old, pulled out a gun and shot Griffin twice in the head at close range.  As he staggered off his bar stool, the gunman fired three more times, but missed.  Then, somewhat amazingly The Times reported, “apparently as an afterthought, the gunman ordered the bartender, William Gallagher, to empty the register.”

Lou’s Corner Bar was gone by the 1970s, replaced by Antores Spiro’s cocktail lounge and restaurant.  Today a delicatessen engulfs the entire ground floor.  The cast iron façade, sorely neglected and in disrepair in the late 20th century, has been sanded and painted.  The narrow 20-foot 57th Street front is both delightful and slightly comical next to its behemoth neighbor.

photographs by the author
many thanks to reader Cathy R. for requesting this post
Posted by Tom Miller at 2:51 AM