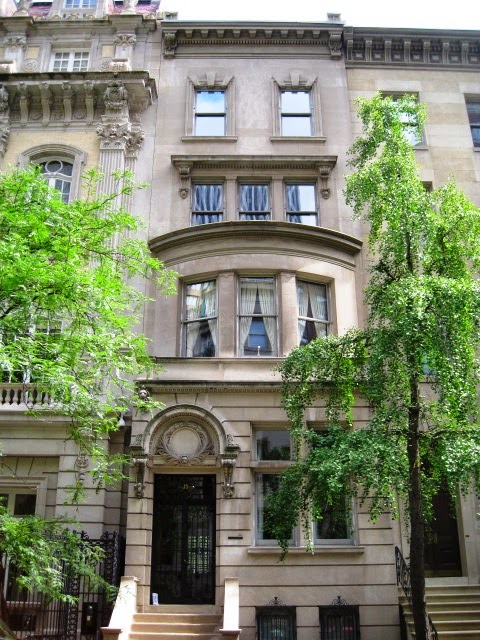 In 1871 brothers David and John Jardine worked both as real estate developers and architects.  Before the century was up, they would line blocks of the newly-developing Upper East Side with long rows of brownstone homes.  But this year they worked on a project as architects only; designing six neo-Grec style homes for contractors William H. and Charles Gedney.

Like Charles T. Wills, W. H. Gedney & Son, would play a major part in building and construction in the second half of the 19th century.  Their speculative homes at Nos. 11 through 21 East 62nd Street would be completed in 1872—handsome Victorian residences with broad stoops and carved stone railings sure to lure merchant class homeowners.

By at least 1891 respected dermatologist Dr. Sigmund Lustgarten was living in No. 15.  That year he had written “The Primary Cause of Death Following Burns to the Skin, with Therapeutic Observations” published in the Medical Record.  Born in Vienna, he came to New York in 1889 and became the visiting dermatologist at Mount Sinai Hospital.  He instructed “many of the leading dermatologists of this city,” said The New York Times later; and was a consultant for the Montefiore Home and other institutions.

Dr. Lustgarten and his wife sold the 62nd Street house in March 1899.  Shortly thereafter The New York Times revealed the buyer as Frank C. Hollins.  But as was often the case, Hollins was apparently acting as an agent to keep the actual purchaser’s name temporarily unknown.

A month later the same newspaper reported on the society wedding of Alfred Rossin and Clara Lewisohn.  The couple was married in the “the newly completed residence of the bride’s father, 9 West Fifty-seventh Street, one of the most beautiful of New York’s newer houses.”  Among the guests that day were some of Manhattan’s wealthiest and best known Jewish citizens, with names like Rothschild, Untermeyer, Stern and Guggenheimer.

The newlyweds would move into the former Lustgarten house—but not before updating the old Victorian.  Rossin commissioned C. P. H. Gilbert, who had recently completed massive mansions for Isaac D. Fletcher and Franklin Winfield Woolworth, to transform the old brownstone into an up-to-date mansion.

Gilbert stripped off the drab stone façade and replaced it with gleaming limestone.  The resulting Beaux Arts beauty bore no resemblance to its former self.  A rusticated basement and parlor floor base supported a bowed second story façade which, in turn, acted as a spacious balcony at the third floor.

Rossin was President of the Public National Bank; and while he busied himself with things financial, his wife was involved with the Hebrew Technical School for Girls as its president.  Working along with her was her father, investment banker Adolph Lewisohn, who served as vice-president.  The school came under fire in January 1917 when Felix Warburg laid plans to update the curriculum.

Warburg was a banker and member of the conference board of the Rockefeller Foundation, which planned to revise primary and secondary education nationwide.  Shocking (and unacceptable) to traditional Edwardian minds was his announcement that Latin and Greek would be replaced by French and German in the “modern school.”  He fired back at criticism saying “It is questionable whether a child can be taught what he ought to know under our present system,” and Adolph Lewisohn back him up.  According to the New-York Tribune on January 22, 1917, he “said the community needed more schools like the Hebrew Technical School for Girls.”

Not far away, at No. 40 East 68th Street, was the grand mansion of John Daniel Crimmins.  The wealthy contractor had created the lavish home by combining two older row houses.  On November 9, 1917 the aging widower died with seven of his ten children at his bedside.  Within three months of the funeral, the Crimmins family moved out of the family home.

On March 16, 1918 The Sun reported “The Crimmins family…will occupy the dwelling at 15 East Sixty-second street, a small house, in the future.”  Alfred and Clara Rossin used their house, valued at $97,000, as partial payment for the Crimmins mansion, which they purchased for $350,000.

Apparently the “small house” on 62nd Street was not sufficient for the Crimmins siblings.  Just a year later, on May 5, 1919, The Sun reported that the house was sold to Howard Elliott for $110,000.  “The new owner plans to occupy the house after making extensive alterations,” said the newspaper.

The 59-year old railroad executive and his wife had two married daughters and a son.  He was President of the New York, New Haven & Hartford and the Northern Pacific Railroads.  He was, as well, a director of 17 other railroads, director of the American Railway Association, and sat on the boards of numerous other concerns.

Elliott came from a distinguished family.  His father, Charles Wyllys Elliott was a historian and author of several books.  The Elliott family traced its American roots to John Eliot who settled in Natick, Massachusetts in 1631 and was known as “The Apostle to the Indians.”  On his mother’s side was Samuel Howard, a member of the Boston Tea Party of 1773. 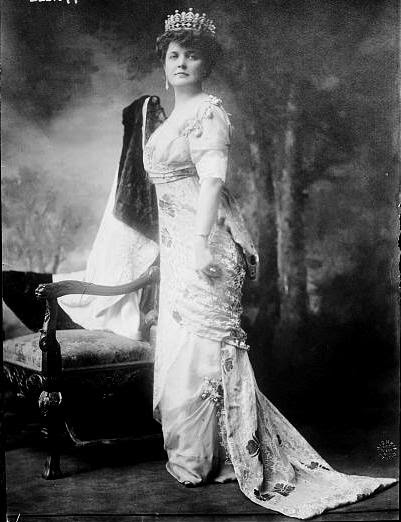 Following his wife’s death in 1925, the semi-retired Elliott lived on in the 62nd Street house with his son, Howard Elliott, Jr.  Three years later he traveled to Cape Cod to spend the summer in the home of his daughter, Mrs. Frederick Wilson.  There, on July 8, 1928 he suffered a fatal heart attack at the age of 67.

Elliott’s entire estate of about $2.25 million was divided among his family.  On October 29, 1929 the house was sold to real estate operator Charles Brown.   He held the property for only 48 hours.  The New York Times, on November 1, wrote “After an ownership of two days, the five-story limestone residence at 15 East Sixty-second Street was resold yesterday by Charles Brown.”  The newspaper added that the buyer “plans to rebuild the house and occupy it.  The alterations will include the installation of an electric elevator.” 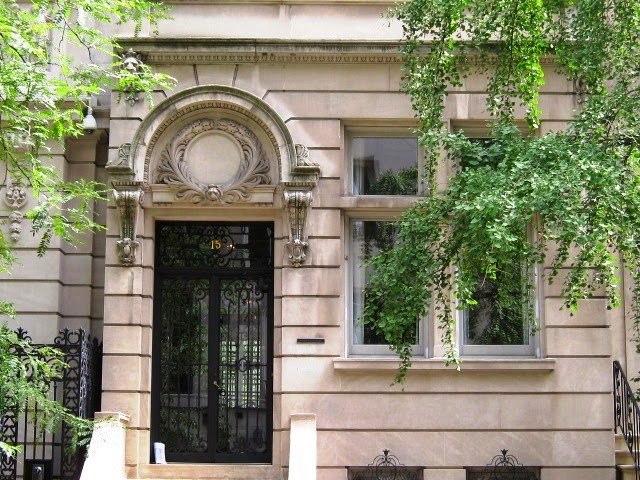 Earlier that year Jennie, the wife of wealthy banker Henry White Cannon, died.  New Yorker socialites were no doubt shocked a year later on September 18 when the 80-year old married Miss Myrta L. Jones.  The Times reported that “After a wedding trip the couple will live at 15 East Sixty-second Street.”

Cannon was a member of the board and a former president of the Chase National Bank.  His illustrious financial career included having been appointed Controller of the Currency by President Chester A. Arthur in 1884 and serving as a delegate to the International Monetary Conference in Brussels in 1892.

Myrta’s family was well respected in Cleveland society; but Henry’s pedigree was impeccable.  On his mother side was Peregrine White, born aboard the Mayflower on November 20, 1620 while the ship was moored in Cape Cod Harbor.  His grandfather fought in the Revolutionary War and died a prisoner of the British in Manhattan.

The millionaire’s age did not prevent him from fathering a son, Harry.  Each winter the family would travel to Daytona Beach where Cannon had owned a house on South Beach Street.  Henry Cannon’s health was been failing for some time in 1934, and it was at the Florida home in April, that he died.

Myrtle and little Harry accompanied the body back to New York and Cannon’s funeral was held early in May in Delhi, New York, where he was born.

No. 15 East 62nd Street became home to Dr. Johan H. W. van Ophuijsen, an eminent psychiatrist and director of the Creedmoor Institute for Psychobiologic Studies.  Born in Sumatra, he was associated early in his career with Dr. Sigmund Freud and Dr. Ivan Pavov—pioneers of psychoanalysis.

He came to New York by invitation of the Psychanalytic Institute to teach in 1935.  He would teach there from 1938 to 1948.  He served on the psychiatric staffs of Mount Sinai and Lenox Hill Hospitals, and beginning in 1946 was attending psychiatrist at the Veterans Administration.

The New York Times would write of him, “Dr. van Ophuijsen stressed the importance of the role of the father in the psychological rearing of children, taking sharp issue with experts who had ‘told but half the story,’ he said, in blaming psychoneurotic symptoms—which in this country made many young men unfit to bear arms during the recent war—on the mother.”

Ophuijsen renovated a lower floor in the house as an office where he personally saw patients.  As well as living in here, he founded the Van Ophuijsen Center in the house.  In May 1950 he was stricken with a heart problem, “but flew to Detroit to read a paper before the American Psychiatric Association’s annual meeting,” said The Times.

Four weeks later, on Wednesday May 31, the 68-year old psychiatrist said good-night to his last patient of the day.  A few minutes later he suffered a heart attack and died in the house on East 62nd Street.

The Beaux Arts mansion continues to be home to the Center, a philanthropic, non-profit institution that carries on its founder’s work.  Outwardly, it remains relatively unchanged since mansion architect C. P. H. Gilbert transformed an outdated Victorian to an modern Edwardian for wealthy newlyweds.