When the esteemed dentist, Dr. Elbert Todd, died in his handsome four-story home at No. 47 East 29th Street on January 8, 1902, the neighborhood was in flux.  Fifteen years after beginning his practice, Todd had purchased the house in 1876.  Sitting between Madison and Park Avenues, it was just a few blocks removed from the Fifth Avenue and Murray Hill mansion districts.

Dr. Todd’s first wife had died in 1881; but he remarried.  A grown son, Ezra Washburn Todd, was also a dentist.  At the time of his death, Todd’s 14- and 17-year old daughters lived in the house with him and his wife, Caroline.  Friends and family who pulled up to the East 29th Street house for the doctor’s funeral in stylish black carriages would have noticed that the private homes on the block were being converted for business purposes.

By now even Fifth Avenue had changed below 34th Street.  Not only had upscale shops like art galleries and dressmakers taken over the brownstone mansions; but many had been replaced by commercial structures.  Only four months after Dr. Todd’s funeral an advertisement appeared in the New-York Tribune seeking bachelor tenants for the house.  “Large rooms, newly furnished; bath on each floor; gentlemen only; house in charge of caretaker.”

For the next decade the Todd family continued to lease the house as a boarding house for respectable single men.  Then in October 1912 the Real Estate Builders’ Record & Guide announced that it had been leased to the Proudman Realty Co. “for business purposes.”

The altered building served as offices for tenants like John Arschagouni, a homoeopathic doctor.  But the upper-most rooms were apparently still being rented as living quarters.  Matylda Neiman, called “a pretty Russian girl” by The New York Times, was living here in 1913.  Although she was employed at the Martha Washington Hotel, she heavily augmented her salary by picking pockets.  When she was arrested on January 11 that year, the newspaper’s headline announced “Detectives Flock to See Pretty Girl.”

Matylda was an expert at her craft.  One detective estimated that her daily take was around $605—in the neighborhood of over $13,000 today.  Matylda answered flatly, “You don’t know that.”

But soon neither the pick-pocketing Neiman nor Dr. Arschagouni would be listing No. 47 East 29th Street as their address.  While the millinery and garment districts had inched north of 23rd Street on the West side of Fifth Avenue; the silk district was engulfing the neighborhood around the Todd house.  Silk merchants and jobbers bustled along the once-placid streets, hurrying to their offices and showrooms.

On May 20, 1916 the Record & Guide reported that Caroline M. Todd had commissioned architects Gross & Kleinberger to replace the old brownstone with a “two-story brick restaurant building.”  Before the first brick was laid, she had leased the property to the Silk Exchange Café.

The architects produced a no-nonsense commercial building clad in variegated brick.  A cast iron-framed storefront nestled within the brick piers.  The charm of the structure was in its creative brickwork, most notably the herringbone pattern between floors, and the grouped set of windows at the second story.

Perhaps it was limited funds that caused Caroline Todd to erect a two-story building rather than a modern loft and store structure.  Her restaurant would cost her just $12,000 to build; significantly less than a large commercial structure (nevertheless a substantial quarter of a million dollars today for the widow).  Or she may have simply been a shrewd businesswoman.  The Silk Exchange Café would thrive in the little building for years.

If the second floor was originally intended as part of the restaurant; that plan quickly fell through.  In March 1917 silk dealer Seville & Jonas leased that space for its offices.  Three years later Arrow Silk Mills, silk jobbers, was doing business there.

Apparently the silk business was not all work and no play.  In 1921 Max E. Klein, principal of Arrow Silk Mills, was sued by William J. Smith Silk Company.  At the trial on February 6, 1922 Philip Getzoff was called as a witness for the defendant.

Getzoff was asked if he had visited Klein’s place of business on Saturday, January 31, 1920.  He testified that he had, and that along with Max Klein, there were six other men in there.  The attorney then asked Getzoff what the men were doing when he arrived.

“They were shooting a game of crap dice.”

In the 1920s journalist O. O. McIntyre fascinated readers with his syndicated column “New York Day by Day” in which he chronicled his observations about everyday Manhattan.  On January 1, 1926 he turned his attention to the Silk District, clearly describing the sweeping changes since Elbert Todd purchased his home exactly 50 years earlier.

“The silk district is in the upper East Twenties.  I notice a Silk Exchange café, a pool parlor and a shoe shine stand catering exclusively to the men who deal in silks.”

But by mid-century the silk district had essentially disappeared from the east side of Fifth Avenue.  The Silk Exchange Café became home to Design Techniques by 1954; a home furnishings retail store where fabrics and wallcoverings could be purchased.

Then in 1989 the little building returned to its original purpose.  Just around the block on Park Avenue was Park Bistro, described by The New York Times in November that year as an “immensely popular French restaurant.”  The owners branched out, taking over No. 47 (which it preferred to call a “townhouse”) and opening Park Avenue Gourmandises.  Where silk jobbers had lunched on corned beef  and crap games went on in the second floor, now trendier New Yorkers purchased “pastries, croissants, cheese and prepared imported foods.”

The gourmet store would remain in the building for years; replaced after the turn of the 21st century by Red Sky, a sports bar and restaurant popular for its roof deck.  But that, too, of course, would not last.  It closed sometime around 2013. 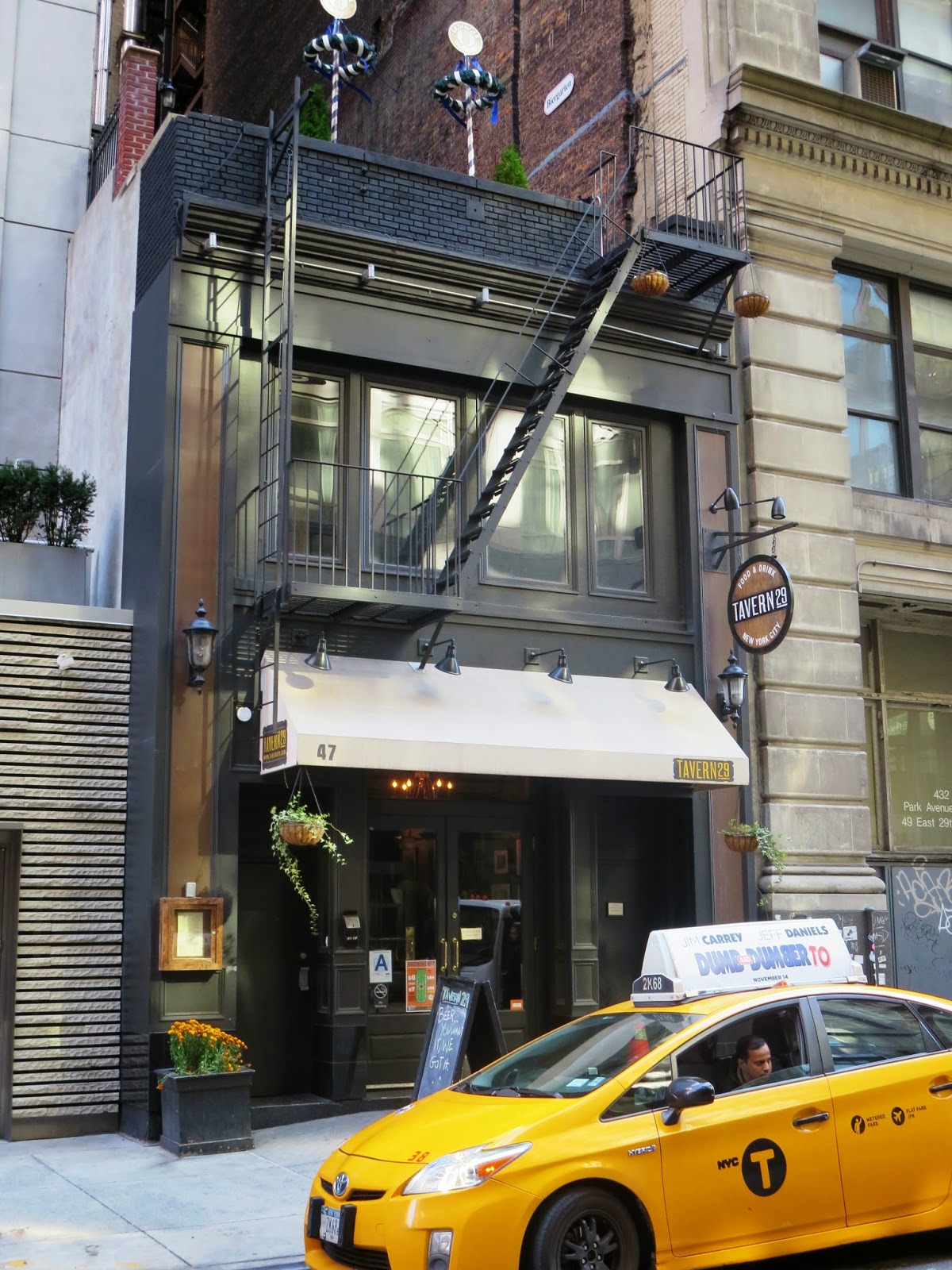 Through it all the tiny little café building had survived remarkably intact.  Then the overlooked relic of the Silk District received a cosmetic updating that effectively obliterated all of the structure's Arts and Crafts charm.

non-credited photographs by the author
Posted by Tom Miller at 2:46 AM