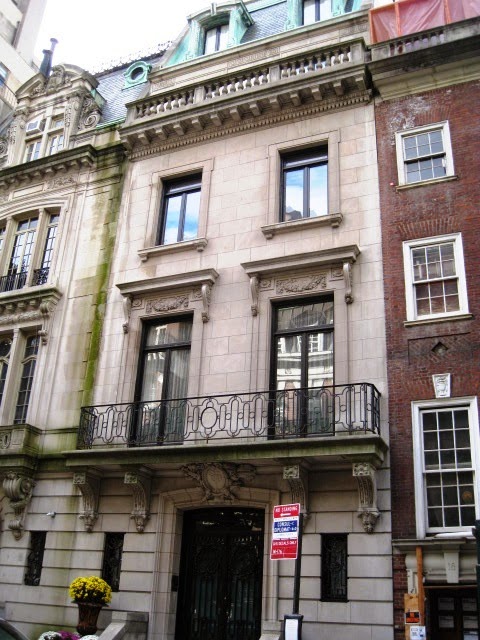 In the 1880s the 73rd Street block branching off Fifth Avenue was still lined with nearly-identical brownstone rowhouses constructed just after the Civil War.   John Foley, his wife Elizabeth, and their two sons, Frank and William (known as Willie), lived in No. 20.

Among the staff was Miss Brown, the boys’ governess.   As was the case with all privileged and well-bred Victorian youths, Frank and Willie took their meals downstairs with Miss Brown.  The arrangement ensured that their table manners would be well-honed before they graduated to the upstairs dining room; and it prevented any unwelcome scenes among guests.

At the beginning of the school year in 1886 Frank was 13 and Willie was 11.  They both attended Public School No. 70, enrolled in the class of Kate P. Macdona.  One day in October young Frank casually asked his governess if she considered Miss Macdona a lady.  Puzzled, Miss Brown asked why the boy would ask such a question.

“Because she said something in school to-day.”

When his governess asked what the teacher had said, he refused to repeat it aloud; but whispered it in her ear.  Later The New York Times related “Miss Brown expressed her horror in unmistakable terms, and told the boy he must be mistaken; that his teacher never could have used such language.”

But, according to the newspaper, “the boy stood to his guns and said that his brother had heard the objectionable language also.”  Willie corroborated Frank’s story, giving Miss Brown “food for much unpleasant thought.”  She was put in the uncomfortable position of decided whether or not to inform her employer.  Two days later she did.

The revelation brought the expected results.  “Mr. Foley was shocked beyond measure.”  When he, as Miss Brown had done, told his sons they must be mistaken, the named two other witnesses to the outrage—Eugene Kahn and Rudolph Lindehaim.

The two classmates were summoned to the Foley house for a “rigid cross-examination.”  The Kahn boy supported the accusation; and young Lindeheim said he heard her say “that or something that sounded very like it.”

John Foley, Dr. Herman Kahn and Ambraham Lindeheim marched off to the office of Principal George White and insisted that their sons be removed from Miss Macdona’s classroom.  Although the change in teachers was sufficient for two of the families; it was not enough for the fuming John Foley.  Armed with written statements from the boys, he went to the school Trustees.

His plan backfired.  The young teacher was questioned and exonerated and the parents were informed that all the boys were to be expelled for spreading malicious stories.   Now that the Trustees had effectively labeled their sons liars, the parents joined forces.  On November 27, 1886 The New York Times said “The parents of the boys are not in a mood to let the board have its ways, and the fight is likely to wax much hotter before the decisive battle is fought.”

Indeed, the fight waxed hotter.  It raged for months, driving Miss Macdona to her sickbed and rousing the blood (as The Times put it) of the Board.   The boys were back in school by November 29; but after Congressman Dowdney insisted on an official inquiry things changed.  In February 1887 the four boys were finally suspended when “a thorough investigation [found] that the charge was without any foundation whatever.”

While the untidy matter of the Foley boys was playing out, Manhattan’s wealthiest citizens were still, for the most part, clustered below Central Park.  But by 1907 things had changed.  On May 26 that year, The New York Times noted that even the Vanderbilt family was giving up on trying to fend off commercial intrusion below 52nd Street.   A recent real estate transaction, said the newspaper, “probably means that the Vanderbilts have finally abandoned their efforts to control the properties in the neighborhood of their mansions” and it had “convinced the Vanderbilts of the impossibility of checking or regulating to any appreciable extent the growth of Fifth Avenue.”

For a decade millionaires had fled northward along Central Park, erecting lavish palaces of marble or limestone.  The old brownstone homes on the side streets were quickly razed or remodeled into modern, upscale residences.   On Tuesday May 28, 1907 No. 20 East 73rd Street was sold at auction “by owners’ orders.”   The advertisement for the sale called it a “magnificent four story and basement brown stone dwelling.”

The purchaser, Mrs. Hugh Gordon Miller, would maintain the house for just three years.  When she sold it to Albert Blum in February 1910, it spelled the end of the line for the old brownstone.  On  April 17, 1910 The American Architect announced that Blum intended to erect a $40,000 dwelling designed by George & Edward Blum on the site.   The projected outlay would translate to about $950,000 today.

Completed a year later, the Blum mansion had nothing in common with the old Foley residence.   Clad in limestone, the opulent Beaux Arts structure harmonized with the Edward Herzog mansion next door at No. 22, erected a decade earlier.  Above the centered, grilled doorway just five steps above the sidewalk was a stone balcony with delicate ironwork.  Supported by heavy carved brackets, it was accessed by two sets of French doors surmounted by carved panels and projecting lintels.  The fourth floor hid behind a stone-balustraded balcony; and a steep mansard with copper-clad dormers made up the uppermost floor.

Albert and Clara Blum had two daughters, Edith and Mabel.  The family enjoyed the lifestyle of wealthy New Yorkers, traveling abroad and summering away from the heat of the city.  With the outbreak of World War I Albert became highly involved in organizing aide for French civilians.  It was the beginning of a life-long interest in Franco-American relations.  When the French Chamber of Commerce of the United States was founded in 1915, he became its Vice President; a position he would hold for life. 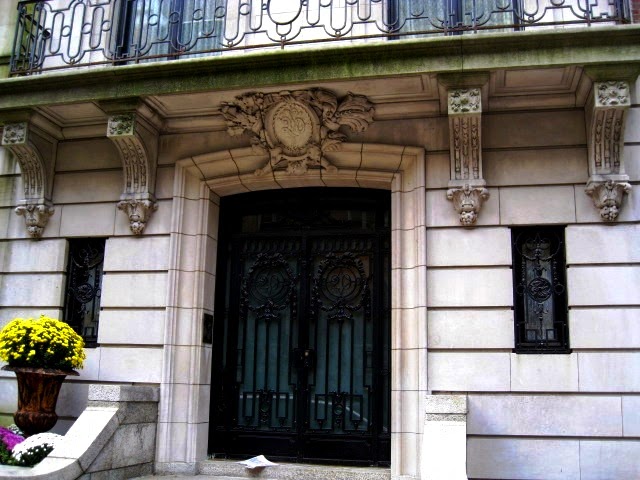 Following the war, Blum continued his work to maintain good French-American relations.  When Jean Raphael Adrien Rene Viviani, former Prime minster of France, arrived in the United States in 1921, he not only visited Congressional leaders; but in New York he was received by the Mayor at City Hall, by the Chamber of Commerce, and was the guest of honor at a dinner in the Blum mansion.

While at the 73rd Street mansion, Viviani bestowed the cross of Chevalier of the Legion of Honor upon Albert Blum on behalf of the French Government.   It would be far from the last such honor Blum received.

Among his similar positions was his directorship of the French Hospital in New York; chairmanship of the executive committee of the Alliance Francaise in the United States; and presidency of the Alsatian Society.  He made generous gifts to the Universities of Lyons, Paris, Strausbourg and Nancy.

In 1931 he was made a Doctor Honoris Causa of the University of Strasbourg, and in 1938 the French Government made him a Grand Officer of the Legion of Honor.

Blum’s contributions to the fabrics industry were as far-reaching as his work with Franco-American relations.  In 1932 he was awarded the Michael Friedsam medal by the Architectural League of New York “for his influence in the improvement of the quality of artistic design in the printing and dyeing of silk fabrics.”

In 1938 the mild-mannered Albert Blum’s health deteriorated.  After a two year illness he died in the 73rd Street mansion on May 2, 1940.  Edith and Mabel, still unmarried, lived on in the house with their mother.  Clara Blum received the bulk of Albert’s estate; although charities received handsome legacies, such as the French Hospital on West 30th Street which received $50,000.

Mabel was First Vice President of the French Hospital when she died in the house on May 1, 1965.  Edith and Clara survived her; still living in the mansion that Albert had built nearly half a century earlier.

On October 17, 1974 the mansion was the scene of a terrifying robbery.  The New York Times reported “A masked burglar broke into [the house] and forced Janice Abbot to open a safe at knifepoint and fled with $1,000 in cash and an estimated total of $50,000 in jewelry.” 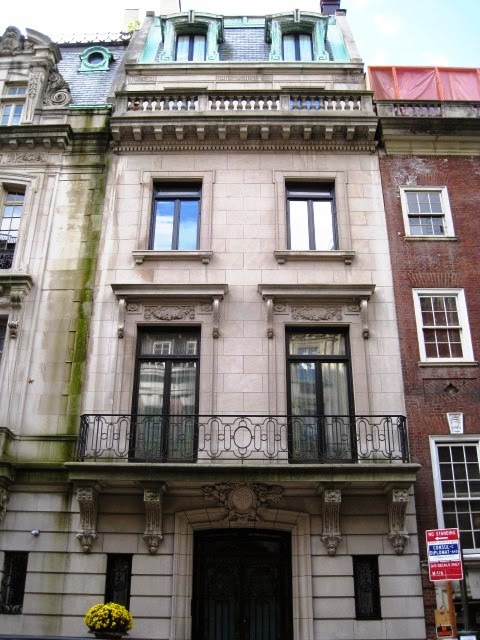 Unlike so many of the lavish mansions of the early 20th century; No. 20 remained a single family residence.  In 1980 it sold for $3.4 million and six years later it brought $5.6 million.  In 2000 the new owner updated the Edwardian interiors, spending $7 million in a renovation that included a basketball court in the basement.  One wonders if the Blum women would have approved.