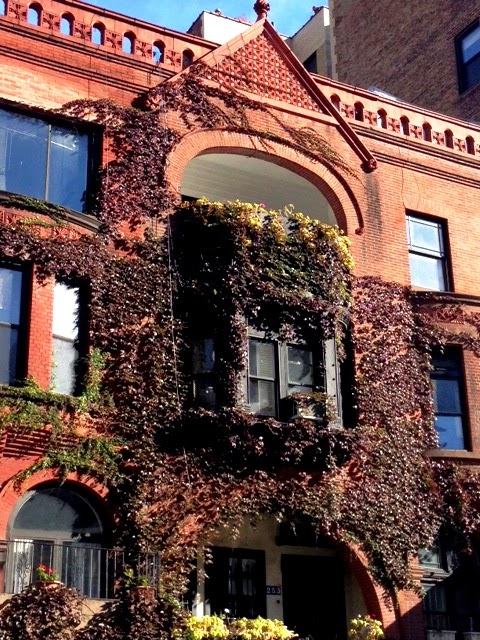 In the last two decades of the 19th century, developers on the Upper West Side grabbed up long rows of property and erected speculative rowhouses.  Quite often their architects created enclaves of harmonious structures that flowed together almost as a unit—each standing on its own merit; but architecturally similar to its neighbors.  In 1885 architect W. H. W. Youngs would go a step further.

Developer E. Stanton Riker commissioned Youngs to design three rowhouses on West 70th Street, Nos. 251 through 255.  The playful Queen Anne style had caught on among those daring enough to step out of the more formal residential box; and Youngs turned to this style for the houses.  His design resulted in the three residences pretending to be one grand home.

Completed in 1886 the brick, brownstone and terra cotta houses rather surprisingly rejected the asymmetry associated with Queen Anne.  Youngs liberally splashed Romanesque Revival into the design in the form of hefty arches at the parlor floor (including the great span that served as the entrance for No. 253) and a gaping arch below the central, terra cotta-filled gable.  He successfully created the illusion of a single, imposing mansion. 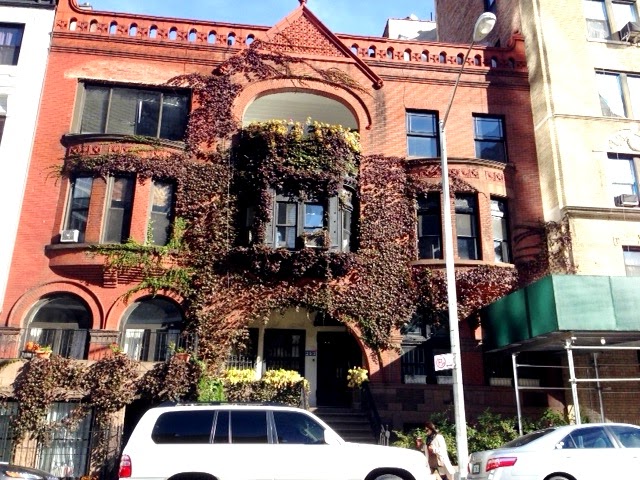 The three houses became home to upscale, respectable families.  By 1895 when Michael Giblin sold No. 251 to John Noble Golding, the Rev. Claudius M. Roome and his wife lived next door and Harvard graduate John O. Powers lived in No. 255.

John Noble Golding was a highly respected real estate broker with an office at No. 9 Pine Street far downtown.  Educated at Trinity School, he was a member of the Lawyers’, Army and Navy, Colonial, New York Yacht and the New York Athletic Clubs.  Golding was also a member of the American Geographical and Numismatic Societies.

Not only was Golding responsible for massive real estate deals like the Equitable Company’s purchase of its Nassau and Liberty Street site; the sale of the Roman Catholic Orphan Asylum on Fifth Avenue for $125 million, and the New York Yacht Club’s property; he sold sites to some of Manhattan’s wealthiest citizens for their mansions.  Included in his client list were Edward Berwin, Charles T. Yerkes, Howard Gould, Stuyvesant Fish, Perry Belmont, George Baker, Joseph Pulitzer and Thoams F. Ryan to name just a few.

As was the case with all the wives of moneyed businessmen, Mabel Golding busied herself with charities.  One of her favorites was the House of Refuge for Women, at Hudson, New York.  The children of these impoverished women were often overlooked and in 1898 Mabel sent off eight bibs, books, wagons and other toys to the House of Refuge.

The year before her donation, Claudius M. Roome, living next door, had been appointed the new curate of Christ Church, then standing at the corner of the Boulevard (later renamed Broadway) and 71st Street.  Born into a prominent old Dutch family, he graduated from Columbia College and Columbia Law School.  Having practiced law for a few years, he gave it up to enter the General Theological Seminary.

Roome’s father had been an important businessman and it was most likely the family's wealth rather than his church salary that enabled him to live in the upscale home.

The outwardly-serene home life of the Goldings, with their daughter Mabel, was shattered in 1904 when John Golding moved out.  Finally, in 1910, Mabel filed a separation suit to ensure her financial survival.  The New-York Tribune published the scandalous headline “Wife Sues J. N. Golding.  Manager of Astor Estate Defendant in Separation Suit.”

Unexpectedly at the time, the title of the 70th Street home was in John’s name, not his wife’s.  Mabel, with no legal expectations of income, testified that John Golding had $3 million in real and personal property.  The terms of the separation required him to convey the title to Mable and to continue paying off the $15,000 mortgage.

The unsuspecting Mabel Golding was no doubt shocked and humiliated when, in 1918, the house was sold at auction for $14,000—less than the mortgage which her husband had decided not to pay.  She took her husband to court again, suing for the $15,000 (about $220,000 today).

Her millionaire husband apparently came through and Mabel and her daughter retained possession of the house.  She would remain in the house another two years before selling it in April 1920.  Although the new owner, Taylor Holmes, promised he “would occupy,” he resold it a month later.

By now Rev. Roome had moved on and F. K. Kraetzer, Jr. owned No. 253.  Mrs. R. A. Du Foureq was leasing it at the time that Mabel Golding moved away.  A year earlier No. 255 had fallen victim to a trend that was sweeping over the Upper West Side.  In 1919 real estate operators Houghton Company announced that the house was “being altered into small suites.”

That year The Cornell Alumni News reported that Ensign William F. Tufts had been released from active service in the Naval Reserve and “is now with the McCandless plant of the Westinghouse Lamp Company.”  He was among the first tenants in the newly-converted house.   Another resident held a related job.  M. H. Naigles, XV worked in the installation department of Western Electric Co. “on the automatic phones.”

Nos. 251 and 253 held out as single family homes for a few more years.  In 1937 the former Golding house was home to Mr. and Mrs. Frank Seitz.  The couple had met a colorful acquaintance through a mutual friend around 1930.  Mrs. Muriel Du Pont Bergman told them she was the illegitimate daughter of Delaware Senator T. Coleman Du Pont.

Now, following the senator’s death, Mrs. Bergman appeared with a letter showing that she had inherited about $40 million from the estate.  Happy and excited, she asked the Seitz couple if they would loan her $15,000.  If so, she would generously repay them with $1 million from the inheritance.

The couple turned over their entire life’s savings to Muriel Bergman.  On August 28, 1937 the 50-year old con artist was arrested in Portland, Oregon on charges of forging the inheritance letter.

By the 21st century Youngs’s brilliant design had been viciously abused.  Only a few of the stained glass panels survive, a regrettable picture window was installed on the third floor of No. 255, and the stoops of the end houses were removed.  Nos. 251 and 253, still apartment buildings, were joined internally in 1978. 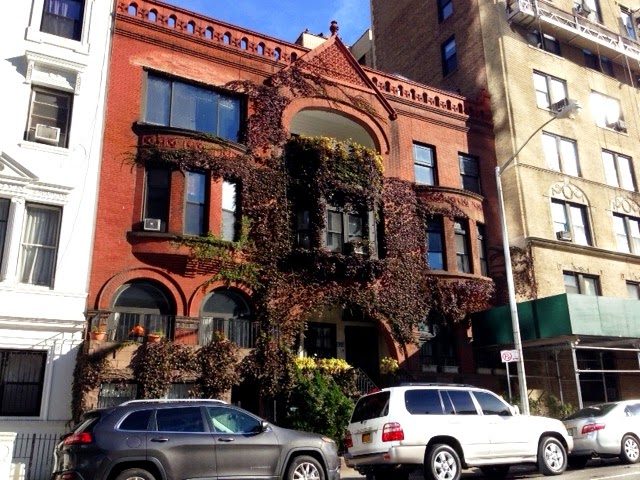 Despite it all, W. H. W. Youngs’s arresting triple residence still manages to catch the eye.