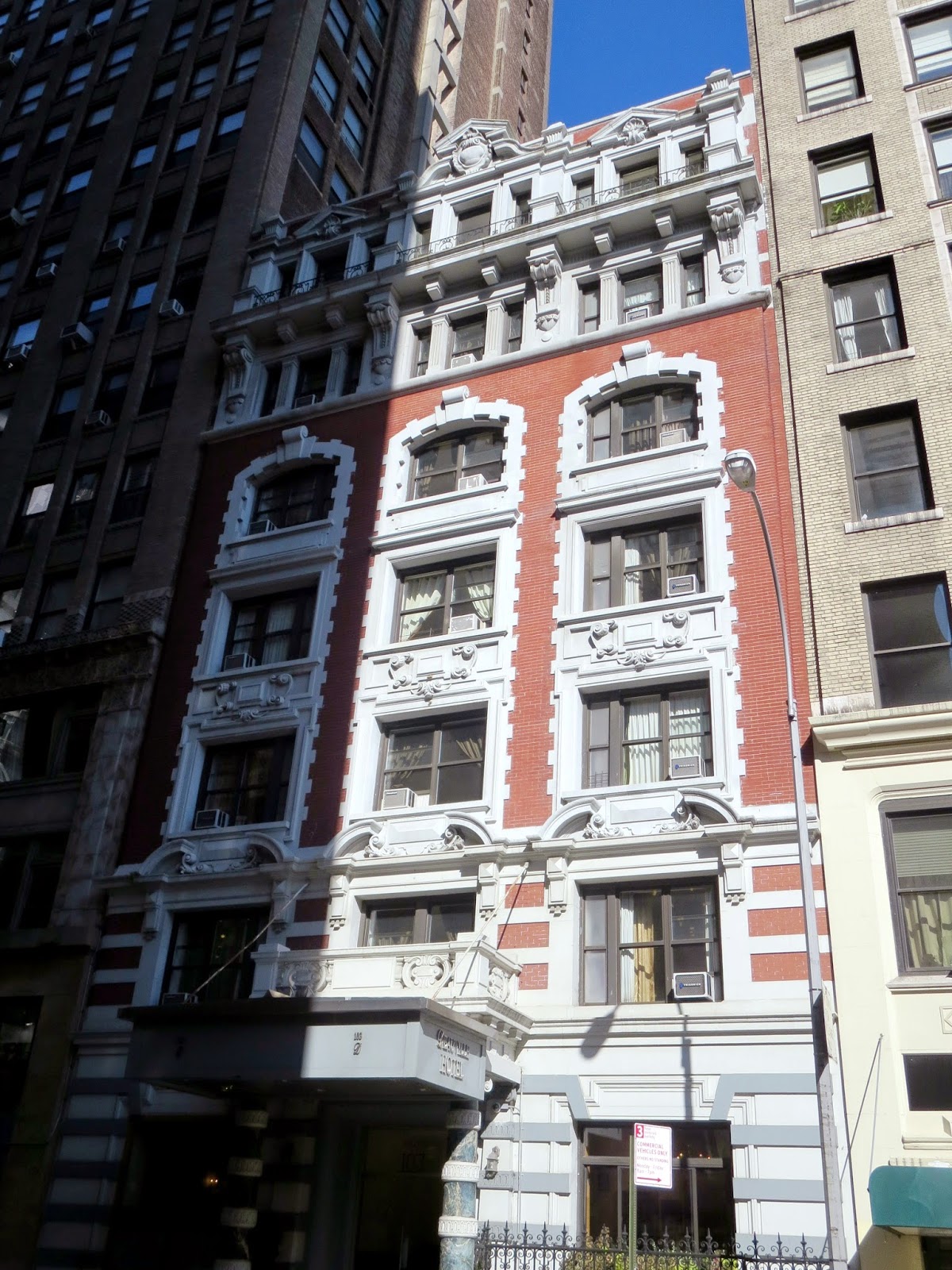 As the turn of the last century approached, unmarried men had a problem: where to live.  Bachelors were not generally welcomed by most boarding houses and respectable apartment houses.  Yet the number of unmarried men in the city skyrocketed between 1870 and 1890, when nearly 45 percent of the male population was single.

The solution as the bachelor hotel, first conceived around 1880.  Within two decades the idea had proved successful and bachelor hotels sprung up around town.  Joseph Flesichman decided to get in on the trend in 1899.  A florist by trade, he was also highly involved in real estate.

The neighborhood around Park Avenue between 42nd and 29th Street was a mixed bag.  Grand mansions still lined both sides of the thoroughfare; yet they shared space with the large hotels that served nearby Grand Central Terminal.  The location was choice for a residence hotel—near both the train station and the upscale residential neighborhood.

On May 18, 1899 two vintage houses at Nos. 101 and 103 East 29th Street, between Park and Lexington Avenues, were sold at auction.  Joseph Fleischman made the winning bid of $38,700, right around $1 million today.  The following day The New York Times noted “The buyer will have plans prepared immediately for a twelve-story fireproof bachelor apartment house, which he will erect on the site at a cost of about $150,000.”

Fleischman seems to have quickly cut back his ambitious plans.  When plans were filed by architects Buchman & Deisler a week later, two floors and $25,000 of the estimated cost had been shaved off.   But Fleischman was not done yet.

On October 21 The Real Estate Record & Builders’ Guide noted that bids for construction were about to be taken  The proposed structure was now described as an “8-story bachelor apartment house.”  Two more floors had disappeared.

Borrowing the aristocratic name of the ancestral country home of Britain’s Lord Salisbury, Hatfield House was completed in 1901.  In the course of construction it had lost one more floor, topping off at seven.  As its name suggested, it bore a rather regal presence among the old houses of East 29th Street.  Buchman & Deisler used a combination of red brick and limestone to produce an appealing marriage of Beaux Arts and neo-Tudor styles.

Banded stone columns supported the entrance portico and balcony.  Heavily-carved pediments and window spandrels embellished the mid-section, along with the stone quoins that connected three floors of openings.  The decoration climaxed at the top two floors with beefy carved brackets, clustered windows and an ornately-carved parapet.

Fleischman's plans had changed in one other aspect.  Hatfield House accepted women.

Among the first tenants was Grace B. Faxon.  A patriotic newspaper Spirit of ’76 said in 1902 “Miss Faxon, the author, is known to the public as editor, reader, teacher of elocution, and writer and director of all branches pertaining to the entertainment field.”  A member of the Daughters of the Revolution, that year she had written a play for the group “and other patriotic Societies,” entitled “Maids and Matrons.”  For $50 and expenses, Grace would oversee three rehearsals of the play “including the teaching of the minuet, directed by the author.”  The periodical mentioned “Correspondence solicited” and instructed those interested to write “Miss Grace B. Faxon, Hatfield House.”

Unlike the lavish apartment hotels of the Upper West Side in which flats included libraries and servants’ rooms, Hatfield House targeted a more middle-class occupant.  Residents, like Grace, were well-educated and respectable; including W. Mansell Daintry, a member of the New York Zoological Society for years; Harvard College graduate John Hudson Bennett; mining engineer Henry H. Knox; and Mrs. Julian Nathan who was Recording Secretary of the Federation of Sisterhoods in 1905.  The federation worked with various women’s Jewish charity groups “for the purpose of performing more effectively the charitable and philanthropic work for which they were organized.”

While, most likely, Mrs. Nathan’s apartment was more commodious; furnished apartments as small as one or two rooms “with bath” were advertised in 1907.

That year was especially traumatic for the Rev. Jesse F. Forbes.  His father-in-law, Charles C. Savage was both highly-respected and influential.  The 88-year old was President and Director of the De Milt Dispensary nearby on East 23rd Street, a member of the Board of Managers of the American Tract Society, the New York Typographical Society, was highly involved with Roosevelt Hospital; and was a member of the Old Guard of the 12th Regiment.  On Saturday, November 9 the old man was at the Forbes apartment in Hatfield House when he died.

Gertrude Ina Robinson not only called Hatfield House home; but she operated her studio here.  A professional illustrator; she was even better known as a harpist.  As the fashionable Manhattan churches reopened following the summer social season in 1908, the New-York Tribune noted “Miss Gertrude Ina Robinson, whose studio is at No. 103 East 29th Street, will resume her work as harpist at Madison Square Presbyterian Church on September 27.  During the coming season Miss Robinson will give five recitals with organ accompaniment as preludes to special musical services.”

Gertrude was busy elsewhere that year as well.  In June she had played at a concert in the Plaza Hotel.  On June 28 the New-York Tribune reported “Among the numbers that most pleased those present was a harp solo, mazurka (Schnecker), by Miss Gertrude Ina Robinson, the well known harpist.”  And the following month she played the requiem mass at the Church of the Transfiguration.

Among Gertrude’s neighbors was the elderly Rev. Dr. Robert J. Keeling.  Although his family had prepared him for a commission in the United States Navy; he decided instead on the Episcopal ministry and graduated from the Theological Seminary of Virginia in 1858.  Now widowed, he lived alone in Hatfield House until his death in his apartment on December 9, 1909.  The Rev. Jesse F. Forbes, who was still living here, died the following year. 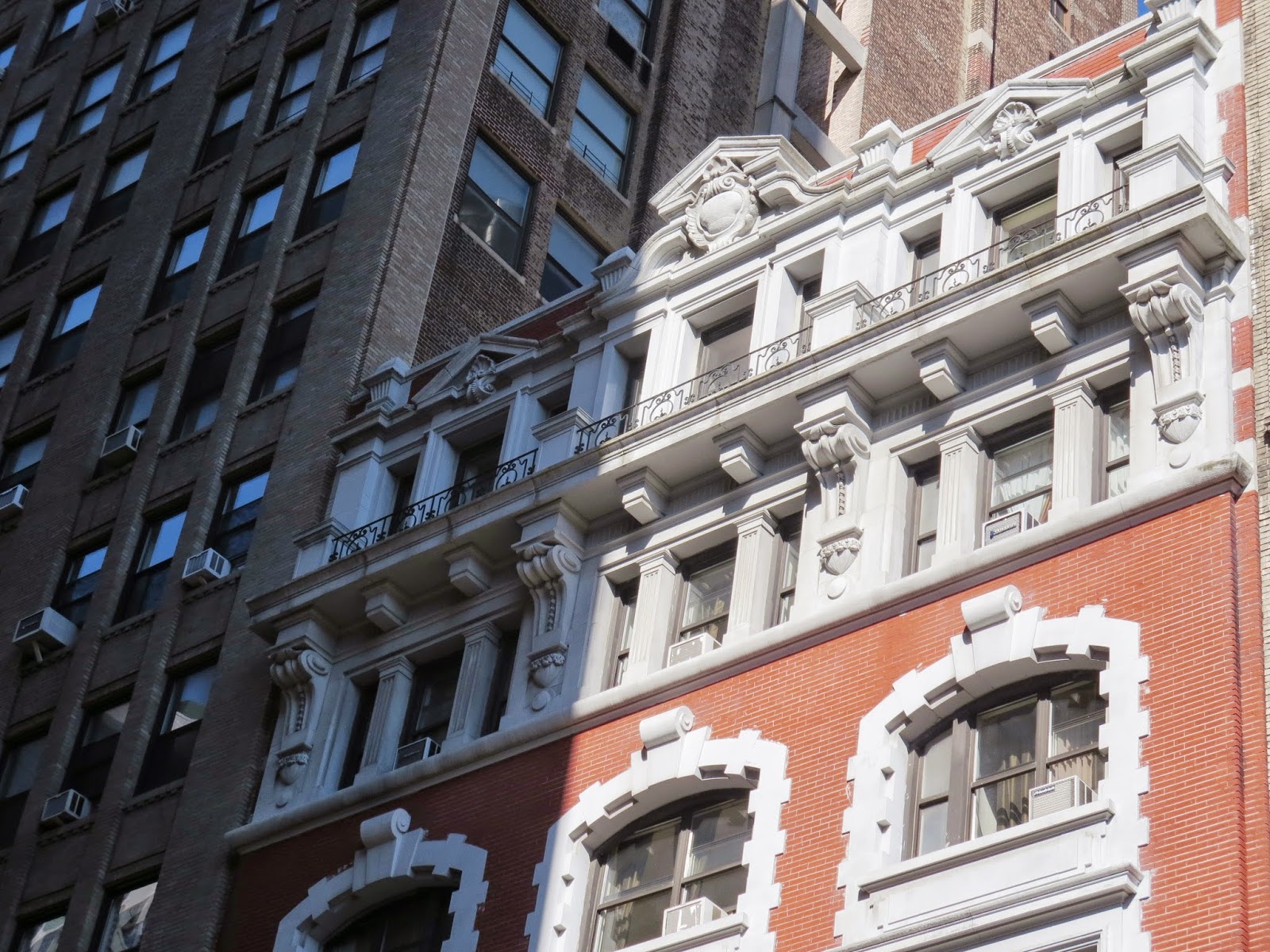 Scandal visited Hatfield House in 1911.  Long term resident Dr. Cleveland C. Kimball was a well-respected urologist.  His love interest was, however, a married woman.  On November 2 that year The New York Times printed a special report from Reno, Nevada.  “Mrs. Rachel Schley, who this afternoon obtained a decree of divorce from William Schley in the District Court, says she is to marry Dr. Cleveland Kimball of New York.”

Although Rachel’s divorce was based on “desertion and failure to provide;” it was apparent that doctor had been seeing the still-married woman.  “At Dr. Kimball’s office, 103 East Twenty-ninth Street, it was said that Dr. Kimball was out, and that no one there knew anything about Mrs. Schley,” reported The Times.

The somewhat lurid attention eventually faded and Kimball was still here as late as 1918.  Other upstanding residents by then were Charles F. Seeger, the principal of the shipping and forwarding business that bore his name; and Dr. Eleanor Hertine who wrote a lengthy article “Ambulatory Types of Thyroid Disease” for the Cornell University Medical Bulletin in 1919.

The comfortable lifestyle afforded the residents was reflected in an advertisement in The Sun and the New York Herald in September 1920.  The available apartments in the building came with “maid service.”

That would all change with the coming of the Great Depression.  Hard times, coupled with Prohibition, resulted in a terrifying reign of mobsters and gang violence in America's large cities.  Hatfield House became a center of underworld hostility at the beginning of the 1930s.  In the spring of 1931 warfare between Italian mobster John (Aces) Mazza, and Abe Wagner raged.  By April a dozen gangsters had been killed.

Police said that the 20-year old Mazza was “the leader of a gang of alcohol wholesalers and hijackers operating on the east side.”  Abe Wagner and his brother Al, were young men “trying to get ahead in the ‘alcohol game,’” according to The New York Times.

On Friday morning, February 21, 1931 Abe Wagner left a restaurant with two companions.  As he started to get into his car, a series of shotgun blasts “blazed out from an upper window in a loft building across the street,” according to a newspaper.  The men fled in various directions.  When police questioned Abe’s brother, Al, he refused to give any information.

Within hours Al Mazza was dead.  He walked out of Milfrank’s Cafeteria at No. 15 First Avenue directly into the line of fire of men shooting from a sedan parked at the curb.  “Police detectives frankly attributed the murder of Mazza to the Wagner gang and said they believed two other members of the Mazza gang had been killed and either hidden or left in some remote spot.”  Before nightfall Mazza’s cohort, John Franzone was dead.

That night 25-year old Al Wagner rented a suite at Hatfield House under the name of Al Katz.  “The Wagner gang, the police believe, took refuge in the unpretentious hotel to hold a council of war and keep out of sight until it was safer to venture out,” reported The New York Times the following day.  “They drank whisky and ale as they sat on the twin beds.”

Around 4:30 in the morning other tenants heard shouting and loud noises.  Police were called and upon entering the 7th floor rooms, “found the body of Al Wagner sprawled on the floor between the twin beds.  He had been shot three times in the chest and the head.  The walls of the room were riddled and furniture was overturned and smashed.”

Detectives believed that the opposing gang members had slipped up the fire escape.  Harry Brown, a 26-year old member of the Wagner gang was severely wounded, as was Abe Wagner.  Police searched for the men, finally finding Brown at Bellevue Hospital with five bullet wounds in his arm, shoulder, back and jaw.  He had been found “reeling in the street” and was picked up by a taxicab.

Detective Barney Ruditsky grilled Brown in his hospital room.  “The only information that Ruditsky could get from him, however, was that ‘they got Abe.’”  The gangster refused to talk.  “If I die I’ll take the names with me,” he said.

And that is exactly what happened.  On February 26 he was died.

As police scoured the city for Abe, his mother begged through the newspapers for a truce to the violence.  She appealed to the Mazza gang to allow Abe to attend Al’s funeral.  “No such assurance reached her, so far as could be learned,” reported The Times on February 23.

The choice of Hatfield House by the Wagner gang as a temporary headquarters drew police attention to the building.  A week later, on March 4, two young men sat in a car in front of the apartment house.  That was enough to draw the suspicions of a policeman who searched the youths, 19-year old John S. Eremotti and 20-year old Raymond W. Elmore.  Ermotti, it turned out, was AWOL from the U.S.S. Colorado since November.  Elmore was on furlough from the Coast Artillery unit at Fort Totten.

The officer’s suspicions were substantiated.  Not only did he find a loaded pistol on the sailor; but the pair was charged with grand larceny when the owner of the car was found and reported it stolen.

When the massive Tudor City residential enclave was completed, its apartment buildings took the names of British mansions; one of which was Hatfield House.  The 29th Street apartment building was less-and-less known by its name and more simply by its address. 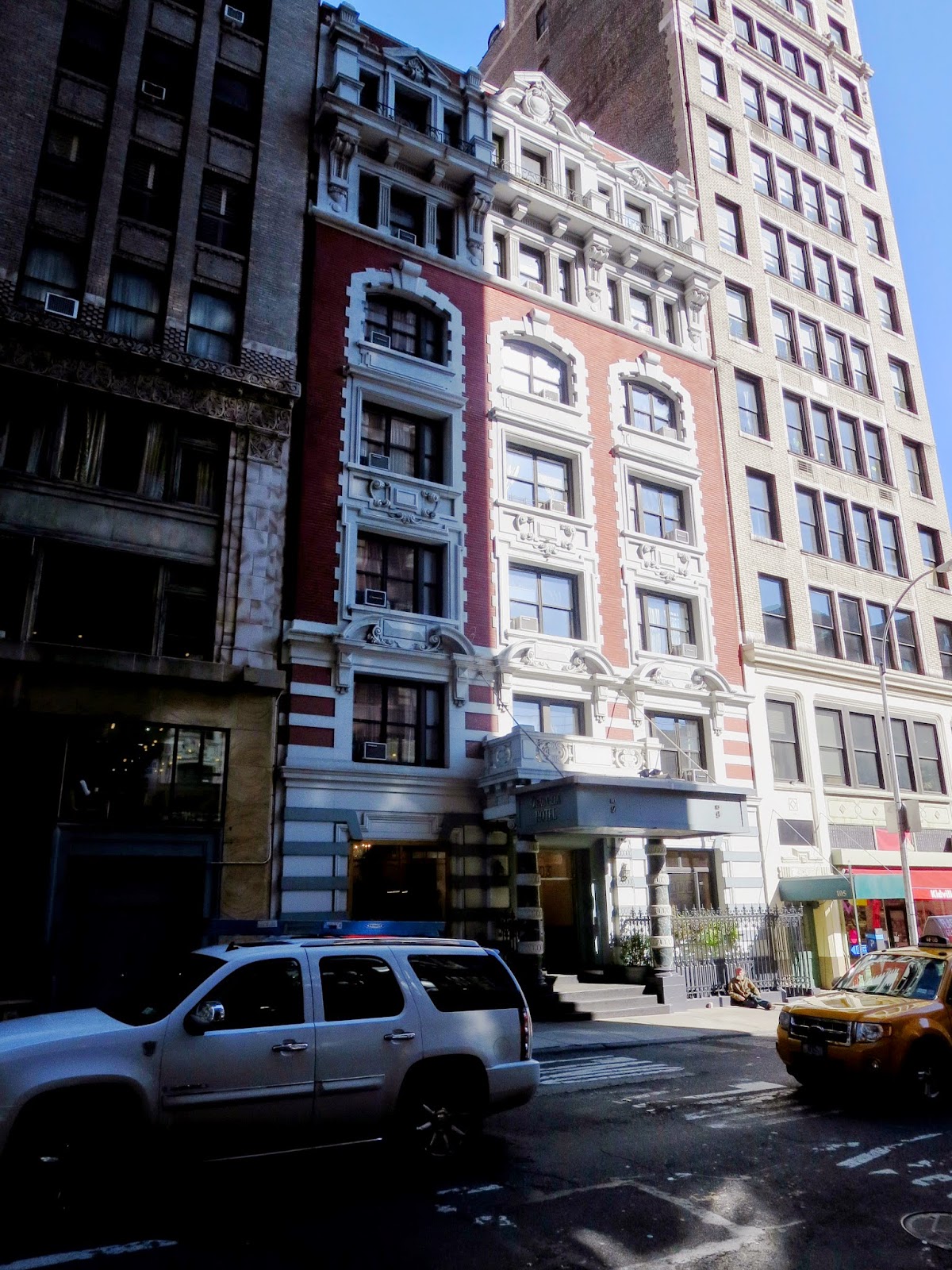 In the second half of the 20th century Hatfield House became the Deauville Hotel.  The renovation to a boutique hotel preserved the original hand-operated elevator while adding an unfortunate sleek marquis that detracts from Buchman & Deisler’s design.  Regrettably the rusticated ground floor was painted white and gray.  And yet the turn-of-the-century hotel with its delicious past survives mostly intact.