In 1872 Austrian immigrant Joseph Keppler began work as an illustrator for Frank Leslie’s Illustrated Newspaper. He formed a friendship with the print shop foreman, Adolph Schwarzmann, and eventually the two conceived of a German-language humor magazine.

A month after Schwarzmann left to open his own printing business in August 1876, the pair formed a partnership and published their first edition of Puck. Schwarzmann provided the financial backing while Keppler came up with the editorial content and illustrations.

The magazine was an instant success and a year later an English version was simultaneously printed. While it supported the Democratic party, the publication was non-partisan in its satire. Political corruption, the latest fashion trends, labor unions, suffragists and “all forms of graft, extravagance and unjustice” were fair game for the editor’s sharp wit. Full-page cartoons printed in color (exceedingly unusual at the time) were most often drawn by Keppler.

As circulation grew Puck assembled a staff of talented comic writers and cartoonists. From its start Puck used the services of the J. Ottman Lithographic Company to produce the lithographs. With the growth of Puck, Ottman’s business burgeoned as well.

In March 1885 Ottman, Keppler and Schwarzmann joined together to purchase the property in the publishing district on the southwest corner of East Houston and Mulberry Streets where they would erect a building to house their two businesses. A year later the massive building was completed. Designed by Albert Wagner it was a great red-brick Romanesque Revival pile, the largest of the publishing house buildings. 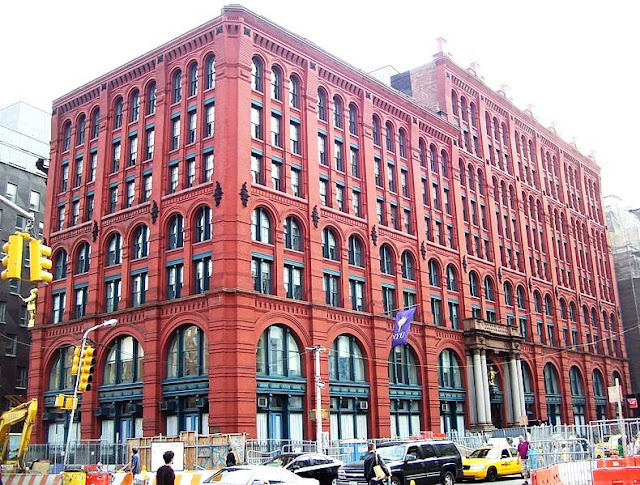 Although construction took less than a year, it was not without problems. In September 1885 the foreman of the bricklayers, Patrick Cavanagh, was fired for drunkenness. A few days later when he had not yet returned home his wife found him in Gilligan’s saloon near the Police Headquarters, drinking with John Sweeney. Mrs. Cavanaugh, “after berating her besotted husband, struck with a bottle John W. Sweeney, who was helping him to spend his money,” reported The Times.

More serious was a strike in December 1885 “against the lumping system in the new Puck building.” Construction, however, continued and the building was opened in 1886, called by The New York Times “a very massive and handsome structure.”

On June 25, 1887 tenants included, in addition to Puck and the Ottman concern, G. P. Baldwin’s bookbindery; Robert Hornby’s electrotyping company; Stadecker & Emsheimer, hat frame manufacturers; H. Lindenmeyer, paper dealers; and on the first floor the hat store of Twest & Co. On that evening a fire originated in Baldwin’s offices and quickly spread. The large amount of inks, glues and paper in the building ignited into a major conflagration, not being fully extinguished until hours later, causing around $30,000 in damages.

﻿The magazine continued to grow – circulation increasing from 80,000 in the early 1880s to 90,000 in the 1890s -- and in 1890 the adjoining property was purchased. A seamless addition, also designed by Wagner was erected between 1892 and 1893. "King’s Handbook of New York City" deemed it “the largest building in the world devoted to the business of lithographing and publishing, having a floor area of nearly eight acres.”


A final alteration became necessary when the city decided to extend Lafayette Street, its route cutting through the western portion of the building. The new western façade was designed by Wagner, however he died in 1898 and Herman Wagner, a relative, and his partner Richard John finished the job. Interestingly, the smaller sculpture of Puck over the original west entrance was duplicated rather than moved.
Although Puck magazine did not survive the First World War, the Puck Building remained a constant presence throughout the 20th Century, relatively unchanged. The large gilded statue of Puck by sculptor Henry Baerer, on the northeast corner of Houston and Mulberry is a favorite among New Yorkers and a surprise to visitors.
In 2004 New York University acquired three floors (75,000 square feet) of the building for its Wagner Graduate School of Public Service and the Department of Sociology. Large areas have been reserved as event venues on the ground and topmost floors.
In the televised sit-com Will and Grace, Grace’s design office was situated in the Puck Building.
When the New York City Landmarks Preservation Commission designated the Puck Building a landmark in 1983, it called it “one of the most imposing and impressive of the old publishing district buildings of the last century.”
Posted by Tom Miller at 2:47 AM