Decades after he joined the Century Association in 1870, Henry Holt reminisced. "When I joined the Century it was unquestionably the most active center of culture in New York." At that time, he said, "there was in the city hardly a man of eminence in literature, art or science who did not belong to the Century."

Holt may sound a bit snobbish; however the membership of the association (which preferred not to call itself a “club”) reads like a virtual Who’s Who of the literary and artistic world – early members including Calvert Vaux, Asher Durand, Winslow Homer, Edwin Booth, Joseph W. Harper and Thomas Cole. 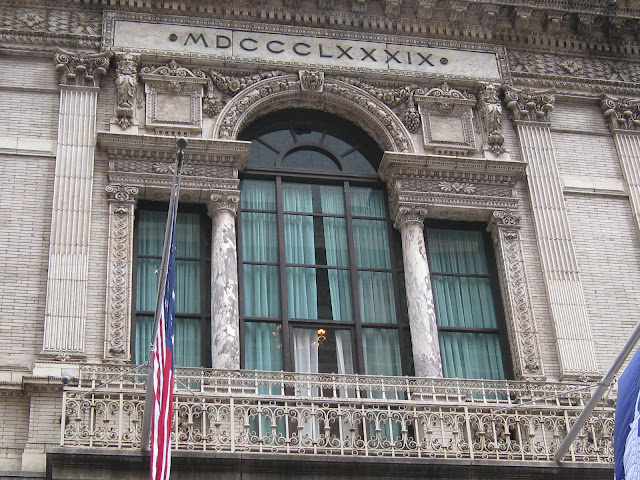 William Cullen Bryant most often gets credit for founding the group in 1847 “to promote the advancement of art and literature;” however there were several erudite gentlemen responsible including William Kemble, William H. Appleton and Asher B. Durand. The name of the club reflected the founders’ intentions to limit membership to no more than 100 – a carry-over from the earlier Sketch Club also founded by Bryant.

Membership was offered to “Artists, Literary Men, Scientists, Physicians, Officers of the Army and Navy, members of the Bench and Bar, Engineers, Clergymen, Representatives of the Press, Merchants and men of leisure.” In effect, anyone with wealth, breeding and education.

After the Civil War, the club established its first permanent headquarters on East 15th Street. As the century ground to an end, the members began talking of a new, roomier clubhouse uptown. On November 4, 1898 a committee was formed to locate and purchase a site “somewhere within the territory bounded by Fourth-avenue, Fiftieth-street, Sixth-avenue, and Twenty-third-street, for a sum not to exceed $200,000.”

A committee member noted that a prime lot on an avenue or corner was unnecessary as “we are not in any sense a ‘window club’…The main object we shall hold in view will be to obtain accommodations for a good and commodious picture gallery and a handsome library, besides, of course, the usual parlors and sleeping apartments.

“The purchase of the new site will be made just as soon as possible, and a building then put up to suit the taste of our members.” 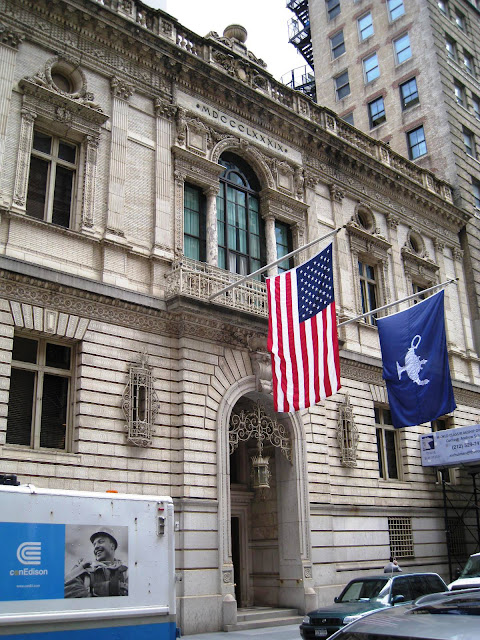 The plot of land chosen was at No. 7 West 43rd Street, midblock, and the building “to suit the taste of our members” would be sumptuous. Club member Stanford White was given the commission and he created a 4-story Italian Renaissance palazzo using granite, terra-cotta ornamentation and brick. Wreath-encircled round windows on the fourth floor tie elegantly with the rectangular windows below creating a single design element. A balconied Palladian window supported by strikingly-grained marble pillars and a classical balustrade above the cornice create an aura of stateliness. The building set the bar for future fashionable men’s clubs.


Although there were ongoing obstacles with budgets, schedules and contractors, on January 10, 1891 the new “magnificent quarters,” as The New York Times called the clubhouse, was opened. Episcopal Bishop Potter presided at the business meeting, during which the cost of the building was reported as $227,673, of which the club owed only $7,327. The special exhibition of paintings in the new art gallery was to be on view to women “by card” three days later; however ladies could not expect admission as members, as with any of the exclusive men’s clubs.

Five years after opening, in 1896, the Century Association hired Elijah Hicks as “hallman.” The Harlem-born black man welcomed the esteemed members at the door with unwavering fidelity until his death in 1934. The death of Hicks, whom The Times said had a “grand seigneur manner” was deeply mourned. Poet Robert U. Johnson wrote a sonnet in his honor and a contingent of members attended his Harlem funeral. “Members of the Century Club…knew in a general way that Elijah Hicks was an old man, and that old men die,” said The Times, “But no one had seriously thought of a time when the aged man would not be there anymore. For even the youngest member, the idea of a Century Club without an Elijah Hicks was inconceivable.”

The following year, in the midst of the Great Depression, the club encountered the first of its legal battles. The club was taken to court in an attempt to make it pay taxes. The single-man jury, a Deputy United States Marshal, was given the task of deciding whether the library and art gallery were enough to describe its members as “followers of art and letters;” or whether the inordinate number of Federal Judges in the membership, the bar, card tables and billiard room instead made it a “convivial social group.”

With its annual art exhibitions, lectures and elite artistic and literary membership on its side, the association won the case.

In 1969 the Yale Club opened its membership to women, sending a shock wave through the men’s clubs of Manhattan. The esteemed University club finally voted for inclusion in 1987. The Century Association, however, stuck to its 140-year-old tradition. No women.

The stance would be short-lived, however, when finally in 1989 the club’s exhaustive legal battles failed and women were finally admitted.


Today the club that was intended for no more than 100 members – called Centurions – has over 2000 members. Stanford White’s grand palazzo, designated a landmark in 1967, is as stately and distinguished as it was in 1891.

It is, according to the Association website “an association of…artists, and amateurs of letters and the fine arts…Its main activity is conversation”

contemporary photographs taken by the author
Posted by Tom Miller at 3:02 AM