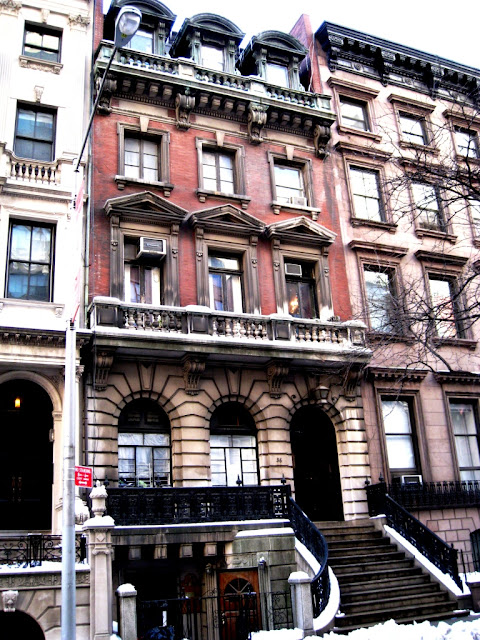 Richard and Mary Poillon purchased No. 36 East 38th Street and moved in with their six children. Poillon, at 44-years old, was a successful shipbuilder. Having learned the trade from their father, Richard and his brother Cornelius had opened their own business, building ferry boats and steamships. With the outbreak of the war, they would grow even wealthier constructing gunboats and blockade steamers.

In July 1891 Richard Poillon died of pneumonia after a three-month illness. Mary stayed on in the house until her death in 1901. That year No. 36 East 38th Street was sold to Middleton Shoolbread Burrill and his wife, Emilie.

An esteemed attorney, Burrill traced his ancestry to eminent colonial families – the Burrills, the Draytons and the Middletons. The couple was socially prominent, their names appearing regularly in the society pages.

The residence that the Burrills purchased was spacious and elegant; but they felt the pre-war architecture could use updating. They commissioned architects Hoppin & Koen to renovate and enlarge their home. The designers worked with the owners, drawing and redrawing the plans – three amended sets of applications being submitted to the Department of Buildings in the summer of 1902.

Finally a plan was settled upon. An additional floor would be added and a completely new façade built to replace the original brownstone.

Hoppin & Koen had already established a reputation for elaborate country homes in the Beaux Arts style. For the Burrill house, they created a lush but restrained façade. Without resorting to the dripping garlands and wreaths prevalent on so many homes executed in the fashionable style, they managed to reflect the owners’ wealth and social position.

﻿The basement and parlor floors form a rusticated limestone base. A wide staircase sweeps up to the porch, gracefully curving on one side. Above the three identical arches the second and third floors rise in red Philadelphia brick behind a stately stone balustrade balcony. The three stone-framed second story windows are capped by classic closed pediments. The copper mansard roof sits above an ambitious stone cornice with a copper balustrade. Three robust copper dormers completed the design which draws on both French and English models.

The Burrills were actively involved in thoroughbred horses and in 1906 built a sprawling summer estate in Jericho, Long Island where the annual Meadow Brook point-to-point races were held. On April 8, 1913 their 20 year old daughter, Leonie, was riding in Central Park when her horse became frightened and bolted. After a ten-block struggle with the horse, Leonie was thrown headlong from the horse onto the asphalt and seriously injured. She was taken to the Presbyterian Hospital where she recovered some time later.

By this time the Murray Hill neighborhood was changing.  Most of the large homes were being converted to rooming houses or commercial offices. In 1929 the Burrills left No. 36, moving into a Park Avenue apartment and leasing the house as an upper-class rooming house.

Here, two days before Christmas in 1934, recent debutante Deane Ashton Libby committed suicide by gas in the kitchenette of her two-room apartment.

As the 1930s drew to a close, Lena Tateosian leased the house, converting it to apartments and rooms. The Building Department noted in 1938 that there were four furnished rooms each on the parlor, second and third floors, one on the “penthouse” level, and one apartment and two furnished rooms in the basement.

Through it all, the outward appearance of the home remained essentially unchanged. Today, while still an apartment building, the magnificent façade retains the stately quality the Burrills sought.

The house was designated a New York City landmark in 2010.

photograph taken by the author
Posted by Tom Miller at 3:04 AM