At the turn of the 20th Century in New York City, wealthy Jewish families – the Guggenheims, the Kahns, the Loebs among them – treaded carefully among their Christian contemporaries. According to Kate Simon in her “Fifth Avenue, A Very Social History,” an unspoken rule was “live and comport yourself at the height of respectability so that ‘they’ might have no handle for criticism.”

Felix and Frieda had admired the Francois I style mansion of Isaac and Mary Fletcher designed by C. P. H. Gilbert in 1898. The couple commissioned Gilbert, known as the architect of mansions, to design a similar, larger and grander residence on a plot purchased from Perry Belmont. Following the couple's general design direction, Gilbert also drew inspiration from the Hotel de Cluny in Paris. Begun in 1907 and completed a year later, it dripped with Gothic moldings and boasted ogee-arched windows, steep slate mansard roofs and crocketed gables, tall chimneys and foliate borders, tracery and copper cresting. Unusual in Fifth Avenue mansions, a 50-foot side lawn fronted the avenue.

According to Kate Simon, as construction progressed Jacob Schiff’s “gesture of protest was to turn his head away when he passed the growing house on one of his constitutionals.”

﻿
﻿ The Warburgs’ limestone chateau featured a grand entrance hall with an enormous staircase. On the first floor were a small gallery for the collection of early German and Italian woodcuts and Rembrandt etchings, and the kitchens and pantries. The second floor held a music room overlooking Fifth Avenue with an Aeolian pipe organ and some of the Warburgs’ art collection – tapestries, illuminated manuscripts and sculpture. A stained glass conservatory housed a Botticelli while an adjoining room displayed a Madonna and Child by Raphael and antique Italian paintings. The formal dining room, hung with medieval tapestries was also on this floor.

Above were the family rooms: the master bedroom, Frieda’s boudoir and dressing room, and joint sitting rooms for the parents. The fourth floor housed the five children’s bedrooms and the fifth held guest bedrooms and a squash court.

A contemporary account said the home was “elaborately fitted out with fine marble work and woodwork which helped to form a fit setting for the extensive and costly decorations, tapestries, furniture and statuary gathered by the banker and his wife from all parts of the world.”

Although, according to Edward M. M. Warburg, “Father used to say had he had any idea what kind of family he was going to have he never would have built so formal a house,” Felix reveled in his children. He played squash with them, invented bicycle polo, sang Gilbert and Sullivan tunes in German to them. He told his wife, “Your children may be spoiled, mine are fun.”

And indeed the children had fun. A train wound its way throughout the children’s bedrooms and Mrs. Walburg’s china bowl in the entrance hall, meant for receiving calling cards, was a perfect target for spitting contests from the staircase landing above.

There were 13 servants living in the house including a nurse and an engineer.

The family lived happily at 1109 Fifth Avenue until one-by-one the children married and left. In 1937 Felix died, leaving a legacy of generous philanthropy. Frieda stayed on in the house, kept company by the family of Max Warburg who were driven from Germany by the Hitler regime.

Things were changing on upper Fifth Avenue though. On May 3, 1940 Frieda Warburg leased a duplex suite covering two full floors in the apartment building at 1070 5th Avenue. Property taxes on the house, totaling $665,000 a year, coupled with operational expenses and maintenance made sustaining the building infeasible. Within a year she emptied the house, donating the bulk of the rare artwork and furnishings to museums, libraries and universities.

Three years later she donated the house to the Jewish Theological Seminary for its Jewish Museum which opened to the public in 1947. In 1963 the side yard was replaced by a new wing. 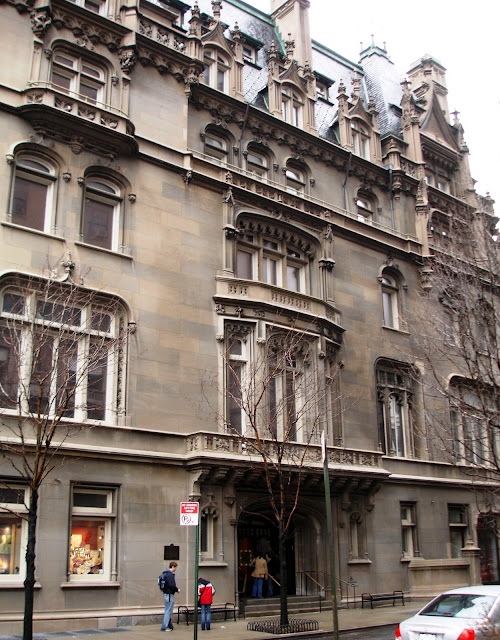 Although in 1970 the museum opposed landmark designation, in 1981 it was unsuccessful and landmark status was awarded. In 1988 designs for an annex by Kevin Roche were approved and the astonishingly seamless addition was completed in 1993, which author Andrew S. Dolkart called “expertly replicated.”

In its designation report, the New York City Landmarks Preservation Commission commented that the “mansion itself is a tangible reminder of one facet of Jewish life in American history, and as such is one of the museum’s most important treasures.”
Posted by Tom Miller at 3:21 AM