Our Lady of Pompeii Church -- Carmine and Bleecker Streets

﻿
﻿
The Greek Revival Third Universalist Church had stood at 214 Bleecker Street for 36 years when, in 1898 the congregation of Our Lady of Pompeii made it their home. The fledgling parish had been founded six years earlier by the Reverend Pietro Bandini of the Missionaries of St. Charles – the Scalabrinians.

The area of Greenwich Village where the church settled was quickly becoming an enclave of Italian immigrants and Our Lady of Pompeii offered services in their native langue. It was here that Mother Frances Xavier Cabrini, America’s first saint, taught for a period.

In 1900 the dynamic and charismatic pastor Reverand Antonio Demo took charge of the congregation. The 30-year old priest who was born in Lazzaretto di Bassano, Italy, became a noted personality and a force within the Italian-American community.

In 1923 the city notified Father Demo that the church sat squarely in the path of the intended extension of 6th Avenue. Through eminent domain scores of structures including Our Lady of Pompeii were condemned and scheduled for demolition.

Father Demo went into action. Organizing the parish into action committees he spearheaded the project of purchasing land and building a new church, rectory and school. The priest personally chose the esteemed architect Matthew W. Del Gaudio to design the structure.

The buildings at Nos. 17 through 25 Carmine Street, at the corner of Bleecker Street, were purchased and demolished and in 1926 ground was broken. 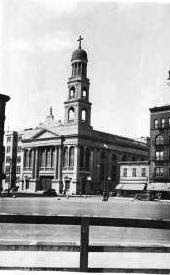 Tragically 3-year old Zita Triglia of 23 Leroy Street was killed instantly when a 10-foot beam fell from the scaffold of the steeple at noon on New Years Day, 1928, knocking the toddler from her father’s arms. Construction was completed nine months later and on October 8, 1928 Cardinal Hayes officiated in the solemn mass dedicating of the new church which was attended by more than 2,000 worshippers.

Del Gaudio’s imposing edifice, costing over $1 million, was designed in the Italian Renaissance style. The limestone Carmine Street façade gives way to beige brick along the Bleecker Street side. The classical elements – immense Corinthian columns and pilasters, a closed pediment over the entrance and stately stone balustrades along the roofline – combine to create a stately presence. The three-story campanile at the corner, topped by a copper dome and cross, has been variously termed “dominating” and “majestic” to being criticized for creating an overall "lopsided” effect. The architect lavished the interior with frescoes and murals and highly polished marble columns.

Father Demo continued to serve his mainly-Italian congregation until 1935. A year later he died and in 1941 the empty triangular plot of land created when 6th Avenue was extended was named Father Demo Square in his honor.
Today Our Lady of Pompeii continues as an active, thriving parish. Although the once exclusively-Italian congregation now is now a harmonious mix of other ethnic origins, one mass is still conducted in Italian every Sunday.
﻿﻿ ﻿﻿
Posted by Tom Miller at 3:14 AM