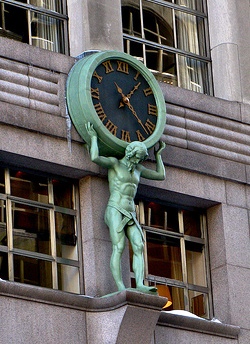 ﻿
﻿Charles Tiffany, during the midst of America’s first great depression, opened his first small store across from City Hall in 1837. His business thrived and ten years later he moved across the street to 271 Broadway.   By 1853 Tiffany & Co. had established itself as a leader in the quality jewelry trade and Tiffany built an impressive new building at 550 Broadway. Feeling that the façade was “monotonous,” he commissioned his good friend Henry Frederick Metzler to carve a 9-foot tall figure of Atlas to be situated over the entrace, holding a clock, four feet in diameter.

Metzler was a carver of ships' figureheads, or “bow portraits.” The bearded, lanky figure was a distinct departure from the hulking, muscular Atlases produced by most contemporary artists. Naked except for a crossed leather strap, Metzler’s Atlas does not bend under his burden, but stands upright and dignified. The left foot is poised to take a step off the statue’s base.

The carver did not attempt to present an heroic figure and instead created a realistic, natural human form; a masterpiece of woodcarving and design. When completed, the wooden Atlas, carved of fir, was painted to mimic the patina of weathered bronze.

Seventeen years later, in 1870, Tiffany & Co. followed the uptown movement of the retail establishments and opened a grand new store on Union Square. With the move came the clock, which was installed directly over the main entrance in a window opening.

For 35 years the Atlas clock served shoppers and businessmen rushing along busy Union Square until Tiffany & Co. moved once again – this time to the imposing white marble palazzo designed by Stanford White on Fifth Avenue between 36th and 37th Streets. By now the Atlas clock was as much a symbol of Tiffany as was the robin’s egg blue box. With the clock on the façade, there was no need for advertising.

“Tiffany & Co. have decided to let the building remain practically unmarked,” reported The New York Times on September 6, 1905. “The only mark of Tiffany about the new building is the great clock outside of the third story on the shoulders of a giant Atlas. This ornament was taken from the Union Square store.”

The uptown odyssey was not yet over for Atlas. On September 7, 1940 a The New York Times headline read “Tiffany’s Atlas Moved; Clock Mounted on Wood Figure is Place on New Home.” Tiffany & Co. had built its next flagship store, a sleek modern structure at 727 Fifth Avenue at the corner of 57th Street. According to Tiffany & Co., “The limestone, granite and marble façade is free of ornamentation, except for the famous Atlas clock.”

In 1980 Tiffany & Co. introduced the Atlas wristwatch, based on the design of the iconic clock outside. Atlas was removed in 1990 for restoration and again in 2006.

After more than a century and a half, Henry Frederick Metzler’s functional sculpture remains a fixture on Fifth Avenue and a priceless symbol of a firm. Amazingly, the mid-Victorian design is comfortably compatible with the streamlined façade on which it rests.
Posted by Tom Miller at 4:46 AM