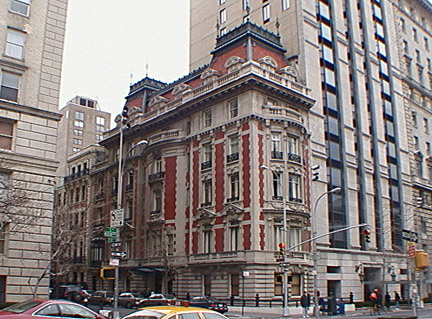 ﻿﻿ ﻿﻿ At the turn of the 20th Century, Manhattan’s wealthy were fleeing northward from “Millionaire’s Row” as retail concerns crept ever closer to their mansions along Fifth Avenue below 57th Street. Recognizing the potential, brothers William and Thomas Hall purchased property on 5th Avenue between 81st and 82nd Streets where they would build four adjoining mansions as a speculative investment.

Architect Alexander Welch of Welch, Smith and Provot was commissioned to design the grand residences which were completed in 1901. Northern-most of these was No. 1009, a dignified red-brick townhouse in the Beaux-Arts style. While the entrance was squarely on 82nd Street, the Fifth Avenue address added a note of affluence.

Sitting on a rusticated limestone base, the house rose six stories to an elegant mansard roof with copper cresting. Both the 82nd Street and Fifth Avenue facades bowed, adding visual interest to the house; added to by balustraded balconies, a petaled glass hood over the entrance and a handsome sidewalk moat. Despite its grand and imposing appearance, contemporary architecture critic Montgomery Schuyler, never one to rein in his negativity, deemed the house vulgar.

Benjamin N. Duke and his wife Sarah, who were living in the Hoffman House hotel, purchased the new 12-bedroom home. Inside, white-and-gold French paneling adorned the public rooms while elaborate carved fireplaces and a glass-covered grand staircase reminded visitors of the owners’ wealth. Duke had amassed a personal fortune of approximately $60 million with the founding of the American Tobacco Company with his brother.

Here, in December of 1906, the couple gave a reception at which Duke's recently-divorced brother, James,  met the Southern-born widow, Mrs. Nanaline Holt Inman.

﻿
﻿ Afterwards, according to The New York Times, Duke “paid her constant attention,” and eight months later the pair was married on July 23, 1907. The newspaper reported that Duke had purchased the former Henry H. Cook mansion at 5th Avenue and 78th Street for his bride, whom it deemed “a handsome brunette” and who “has always attracted a considerable amount of attention.”

James Duke set about demolishing the Cook house and having a new mansion built on the site. In the meantime, Benjamin Duke and his family left No. 1009 Fifth Avenue and moved to the Plaza Hotel in 1909.  While construction on their new residence dragged on, James, Nanaline and her son moved into No. 1009 5th Avenue, along with nine servants. The new house at No. 1 East 78th Street was completed in 1912 and, when the Dukes moved in, they rented No. 1009 to Moses Taylor of the banking firm Kean, Taylor & Co., for $30,000 a year.

By 1922 the house was again occupied by Dukes – this time Benjamin’s daughter Mary Biddle and her husband Anthony J. Drexel Biddle, Jr. As the decades passed, Mary would have designer Karl Bock update non-public rooms, creating a royal-blue glass tiled bathroom and an oval black-marble and mirrored bath.

When Mary Biddle died in 1960, the 5th Avenue blocks facing Central Park were being built up with high-rise, sleek luxury apartment buildings and one-by-one the grand mansions were torn down. Concerned that the family mansion would suffer the same fate, Mary Duke Biddle Trent Semans and her husband purchased the house from her mother’s estate. 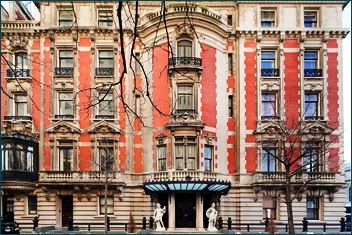 “I had a very wonderful childhood there. We had wonderful Christmas trees. My mother was an opera singer. She had music going all the time. She had concerts in that middle hall,” she told Forbes Magazine in 1960. “We both decided we mustn’t let that go. We didn’t want the neighborhood to be destroyed, and we were sure that some high-rise would replace it.”

Although the family never again took up residence, she reserved several important floors including the parlor level for family stays; dividing the rest of the house into distinguished apartments and offices. In the 1970s, as she was approached by developers who eyed the site for an apartment house, Mary Semans and her husband worked to get the house recognized by the New York City Landmarks Preservation Commission and, in 1974, it was given landmark protection. Subsequently No. 1009 stands alone, the last survivor of the row of four houses built by the Hall Brothers.

In 2006 the house was sold for $40 million to Tamir Sapir – a Russian immigrant who started life in New York as a taxi cab driver and became a billionaire investing in real estate. Sapir intended to use the house as a showplace for his collection of ivory, however when the government found he was illegally importing the ivory carvings and endangered species pelts into the country on his yacht, the plan died.

Benjamin Duke’s 20,000 square-foot mansion sold in July 2010 for $44 million -- $6 million less than Sapir was asking – to Carlos Slim, sometimes called the world’s richest man who made billions in the Mexican telecom industry. It is an architectural and historic treasure; a reminder of what life was like for the extremely wealthy on Fifth Avenue at the turn of the last century.
Posted by Tom Miller at 3:05 AM