﻿
﻿By the early 1880s the fire headquarters or Mercer Street had become crowded and obsolete. The expensive and complicated telegraph apparatus alone – said to be unequaled worldwide – required a great deal of space. “So, instead of putting up merely an engine house in Sixty-seventh-street,” reported The New York Times, “they decided to put up a handsome building with room for an engine and a new truck company and all the department offices, too.”

Plans were drawn up for a new, state-of-the-art Fire Headquarters at 157 E. 67th Street, next to the planned 28th Precinct station house. Napoleon LeBrun & Son had begun designing New York City firehouses in 1879 and for this one the architect chose the currently-fashionable Romanesque Revival style.

Cost estimates in 1885 were about $125,000 with another $50,000 required “to paint it, warm it, ventilate it, furnish it, and finish it up ready for use.” Using brownstone (from “Kocher’s quarry”), Philadelphia brick, copper cresting and iron, LeBrun utilized arched windows, a slated mansard, and an imposing corner lookout tower and belfry to create an imposing structure.

Contemporary critics were most impressed by the tower. The Times said, in 1885, “A conspicuous feature of the building will be the tall tower at the east end,” and, upon the building’s completion Augustine E. Costello wrote in his 1887 “Our Firemen: a History of the New York Fire Department,” The front window has a stone balcony, giving an extended view of the city, but the view is not to be compared to the one to be had from the broad iron balcony of the story above, and which runs around the tower and forms the cornice of the belfry story. From here is a noble view of the city and all the surrounding country.” The lookout, he said, “is of iron, treated as such, with no attempt to imitate a more valuable material, and surmounted by a slated spire, terminated by a copper finial.”

The Fire Department intended the new headquarters to be outfitted with the most modern equipment. An Otis elevator would be installed and both “the engine and truck companies will be equipped as no fire companies are at present.” The second floor would house the dormitories, the third would contain the offices of the Commissioners and their clerical staff and the fourth floor would hold the offices of the Superintendent of Buildings, the Bureau of Combustibles and other functionaries. The telegraph apparatus would be installed under the mansard roof.

The building would also include a gymnasium and a drill yard in the rear.

In 1886 the contractor constructing the new building, Mr. Duffy, unexpectedly died, leaving his son to finish the job. The apparently less-apt successor failed repeatedly to meet extended deadlines and, finally, the Commissioners fired Duffy and hired independent men to finish the job. So disgruntled was Duffy that as the final touches were being done in December, a police guard had to be posted at the site “to prevent a breach of the peace.”

On April 16, 1887 the headquarters was officially opened with a reception. The mayor and other dignitaries were given demonstrations in the rear yard and “held their breath as the gallant Life-Savings Corps went up the flimsy ladders like so many monkeys” and a stream of water was streamed over the housetops, according to The Times.

The newsaper reported that “The new headquarters of the Fire Department are fitted up very handsomely” and “The private rooms of the Commissioners are marvels of elegance, particularly that of President Purroy.”

Within two years the once awe-inspiring telegraph system had grown obsolete. The floors of the headquarters were ripped up so the hundreds of replacement wires for the new alarm system could be installed. On March 27, 1889, several firemen slipped a box under the open floorboards, within 15 feet of the Chief’s desk, as a sort of time capsule inscribed “To whom it may concern a hundred years from now.”

What the firemen failed to consider was the quickening advancement of technology. It was not a century later, but 11 years, when the floorboards would again be ripped up to update the wiring. Workmen, on April 8, 1900, discovered the box and Superintendant Blackwell opened it, reading aloud the contents to the embarrassment of those involved. One paper read:
“We, the undersigned, employees of the Fire Department of the City of New York, do solemnly declare that we are sick and tired of this eternal racket incidental to the tearing up of these floors, and the placing of these wires, and in deep sympathy with the feelings of those who have suffered we bury these few lines and subscribe ourselves.”

During this time Pinkie was the “coach dog” of the firehouse for years. Dave Oates, the engine driver, made a miniature bunk for him next to his own and at the sound of the fire alarm Pinkie would leap to the front seat of the engine next to Oates for the ride to every fire. Pinkie died in March of 1907 when a fireman sliding down the fire pole landed on the dog, breaking his back.

In 1914 the headquarters moved out, being replaced by the Board of Education offices; although the Engine Company 39 and Ladder Company 16 remained as did the training center. However, in the 1970s a planned expansion of Hunter College threatened the building, as well as the old police station next door. Although the Landmarks Preservation Commission quickly landmarked the buildings in 1980, the City countered the move, reversing the designation, deeming the aged structures ineffective.

Citizens' groups and the Landmarks Preservation Commission faced off in a stalemate with the City.  After no fewer than five suggested compromises were turned down, a proposal by restoration architect Carl Sterin put forward the possibility of demolishing only the rear portions of the vintage buildings, connecting them and restoring the facades.  The revised college expansion would be executed separately from the buildings.

Completed in 1992, the renovation provided use of the upper stories of the fire headquarters building to the newly-connected 19th Precinct. The fire headquarters had suffered considerably throughout the 20th Century -- the top of the lookout tower was gone and the brownstone was seriously deteriorated. The façade was completely restored, including cast-stone replacements for the damaged brownstone. 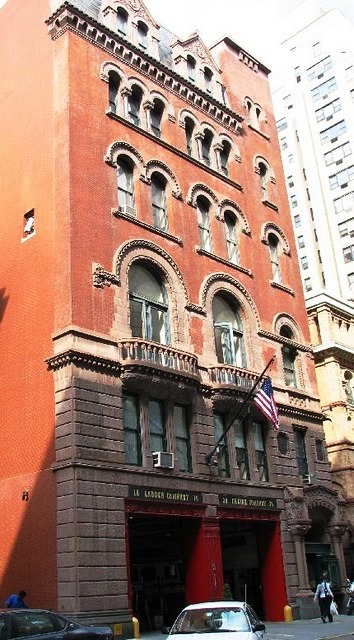 Six years later the fire headquarters building, which the Landmarks Preservation Commission called “an outstanding example of late nineteenth century civic architecture,” was re-designated a New York City landmark and continues to this day fulfilling the needs of the city.
Posted by Tom Miller at 2:35 AM