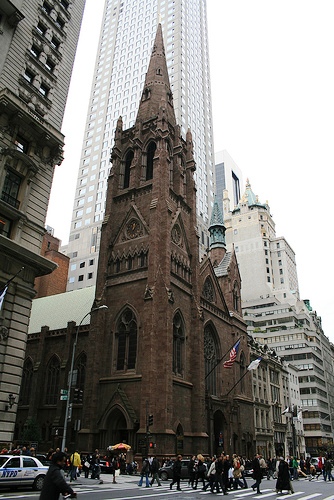 On December 19, 1808 a small congregation formed The Cedar Street Presbyterian Church on Cedar Street near William Street. As the city grew northward the church moved to Duane Street in 1836 and, in 1852, moved again to Fifth Avenue and 19th Street. Finally, in 1875, the church, now known as the Fifth Avenue Presbyterian Church, moved for its final time to the corner of 5th Avenue and 55th Street.

The land was purchased for $350,000 and, surrounded by brownstone mansions along “Millionaires Row,” the new church would cost an amazing $1 million.

While the new St. Patrick’s Cathedral four blocks to the south and St. Thomas Episcopal just two blocks away utilized the traditional Gothic cruciform layout; architect Carl Pfeiffer produced an interior that was revolutionary for its time. There were no right angles, no soaring stone pillars. Instead Pfeiffer produced a ship-like open space with a ribbed 60-foot ceiling and unobstructed views from every perspective. The carved woodwork was of polished ash. The New York Times called the interior, capable of seating 2,000 worshippers, “early English.”

The brownstone exterior was purely Gothic. The two main entrances, on Fifth Avenue and below the corner tower on 55th Street mimicked the Gothic arches of the 49 traceried windows and belfry openings. The main steeple, also executed in brownstone, rose 300 feet above Fifth Avenue. Lesser, copper-clad towers to the north gave an exceptionally picturesque touch; however they were as much utilitarian than simply attractive.


In the third quarter of the 19th Century, long before air conditioning or central heating, worshippers suffered intolerable heat in the summer and cold in the winter. Pfeiffer solved the problem with an ingenious system of air movement.

In the basement he had installed 9,000 feet of steam pipes directly below the floor of the sanctuary. The two lesser towers acted as airshafts, outfitted with a iron fan seven feet in diameter which ran at 220 revolutions per minute. When the shafts sucked the air out of the sanctuary, the warmed air from the basement was pulled through the holes in the floorboard, heating the room (and, more importantly, the feet of the parishioners!).

Likewise, in the summer, the fan would pull 30,000 cubic feet of air out of the church every minute, completely renewing the air every fifteen minutes and providing a constant movement of otherwise stale, hot air.

Behind the sanctuary was a chapel, 75 feet by 45 feet, a lecture room, a large hall and rooms for the minister, trustees, sexton and classrooms and a roomy library.

Through the immediate and aggressive sale of pews, the structure was paid for within only two years.  “The pews,” reported The New York Times on May 23, 1875, “were appraised in such a way as to provide for the extinction of the debt, and for the annual expenses of the church organization. These prices ranged from three hundred dollars each to six thousand dollars, according to location…”

While the purchaser received a perpetual title to his pew, he was then liable for an annual assessment of six per cent on the cost price.

The church realized almost immediately that, based on its popularity, it might have nearly doubled its physical size. Under the Reverend Dr. John Henry Jowett in the first quarter of the 20th Century, upwards of 1,000 hopeful worshippers would have to be turned away on a Sunday morning.

While its wealthy congregants may have been outwardly proper, the church was often forward-thinking and atavistic. In 1867 it established the first Bible class in the city for women, resulting in lines outside the church awaiting admittance. By 1907 it was supporting two missions, a large settlement house, numerous educational, charitable and relief agencies and employed 57 clergymen and paid workers globally to carry out its missionary and charity work. The church was instrumental in the establishment of the Princeton Theological Seminary and the New York Presbyterian Hospital.


A riot was narrowly avoided when, in 1920, ministers from Belfast were invited to speak, representing the Protestant churches of Ireland. Sinn Feine members, the Irish Republicans, massed outside the church on Fifth Avenue hollering “Hurray for the Irish Republic!”

During 2000 and 2001, as an outward demonstration of its concern for the less fortunate, Fifth Avenue Presbyterian established a policy of allowing the homeless to sleep on the steps of the church. Although there is a shelter in the basement, it was limited to ten men. The pastor, one Sunday, remarked to the congregations that “these homeless friends are part of our ministry…Outside on our signboard there’s a sign that says ‘This is God’s House, All Are Welcome.’ All are welcome, and we mean it.”

When, in December 2001, the city evacuated the homeless from the steps, the church filed suit, charging that the city was in violation of the United States Constitution. The church won.

In the 1990s, after a five-year study, a major renovation project was undertaken that included the formation of a new Christian Education Center in the formerly unused space below the sanctuary, installation of air conditioning and fire proofing. Today Fifth Avenue Presbyterian remains essentially unchanged, down to the gas brackets and reflectors still in place.
Posted by Tom Miller at 3:25 AM