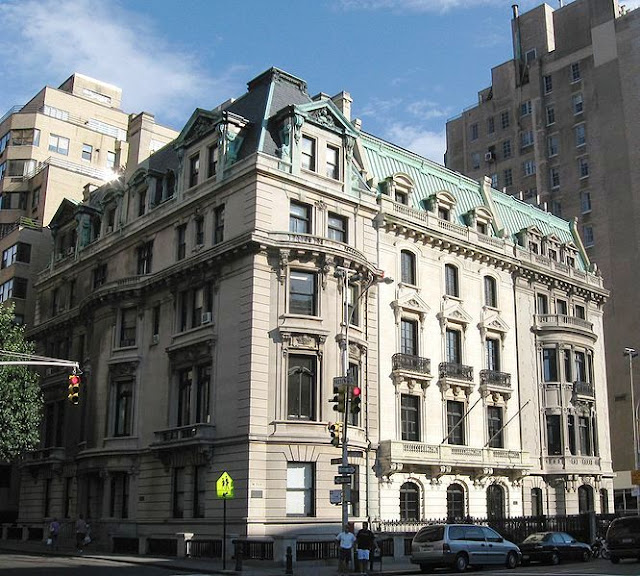 At the turn of the 20th Century, Jonathan Thorne has amassed a sizable fortune in the leather trade. As he prepared for his retirement, he planned for a sumptuous home in which to spend his later years. By 1900 marble and limestone chateaux, palazzi and palaces of New York’s millionaires rose along upper Fifth Avenue across from Central Park, replacing the stately but restrained brownstone mansions of a half-century earlier. This overt display of wealth gave the 1890s and early 1900s the designation of The Gilded Age, or somewhat more disparagingly, The Age of Ostentation.

Thorne intended that his success be noticed. In his search for an architect for his new home at Fifth Avenue and 84th Street, he started at the top. C. P. H. Gilbert would be remembered as the mansion architect, and had already designed opulent residences for F. W. Woolworth, Isaac D. Fletcher and numerous mansions in Brooklyn.

Construction began in 1900. Gilbert produced a striking five-story limestone Beaux-Arts showplace over a basement protected by a sidewalk moat. While the entrance was squarely on 85th Street, Thorne retained the more impressive 1028 Fifth Avenue address. The restrained design featured a rusticated first story base supporting two floors which bowed out over the entrance and were capped by an exuberant bracketed cornice. Above the fourth floor a steep mansard roof was ornamented with wide dormers with copper pediments and detailing.

As Thorne’s home was being completed in 1901, construction began on the two adjoining southern lots at 1027 and 1026. Here real estate speculator Benjamin Williams planned two impressive mansions, designed by Van Vleck and Goldsmith. The architects deftly created a continuation of the French style begun by Gilbert, lining up the mansard roofs, the cornice line and the windows so adroitly as to produce a uniform flow, while permitting the individual residences to stand on their own architecturally.

George Crawford Clark purchased the mansion next door to Thorne for $540,000 and the wealthy Mary Kingsland moved into No 1026.  Kingsland was the daughter of William H. Macy who had made a fortune in the whale oil business; later to be president of at least two banks.
In 1919, the year that Thorne’s son, Henry Sanford Thorne, was listed as serving in the Officers’ Reserve Corps of the Army of the United States, the block changed. Mary Kingsland died leaving an estate of $10.5 million, her home at No. 1026 being sold to Dunlevy Milbank; and the Clark house was sold to Herbert Lee Pratt who set about redecorating many of the rooms.

A year later Jonathan Thorne died. Florence Vanderbilt Burden, the great-granddaughter of Cornelius Vanderbilt purchased the house, living here only five years before selling it to Mother Joseph Butler, RSHM, of the Order of the Sacred Heart of Mary.  The mansion would be used as a “select school for girls in connection with Marymount College at Tarrytown-on-Hudson,” reported by The Times. The newspaper stressed that the girls would “get religious training as a safeguard against ‘socialism and chaos.’”

By 1936 the student body of the Marymount School had grown to the point that additional space was necessary. Pratt sold his adjoining mansion to the school in 1936. Fourteen years later, Mary Kingland’s house at No. 1026 was acquired as well. The three mansions were carefully joined, the interiors being preserved as much as possible while adhering to the necessities of an educational facility and accompanying building codes.

In 1950 the school began accepting boys and on the morning of April 14, 1954, students got the “shock of their lives,” according to The New York Times, when “the massive chimney of the former Frederick W. Vanderbilt mansion, next door, fell against the building [the Thorne mansion].”

In 1984 a gymnasium was built on the roof of the three houses and in 1994 science labs were constructed in the top floors of two of them. Despite the changes, Marymount archivist Susana Acosta stresses that the mansions have been left “pretty much as they were…in accordance with the buildings’ landmark status” which was designated in 1977.

Jonathan Thorne, who intended to make a splash with his elegant home in 1901, is today vaguely remembered. Shortly after his death the mansion became commonly known as the Florence Vanderbilt estate, and today is grouped with its two neighbors as “The Pratt Mansions.” The house is, however, a remarkable surviving example of the glittering lifestyles of New York’s millionaire class at the turn of the last century.

Many thanks to Meryl Carmel for her information and clarification on the Kingsland-Macy family history
Posted by Tom Miller at 3:25 AM