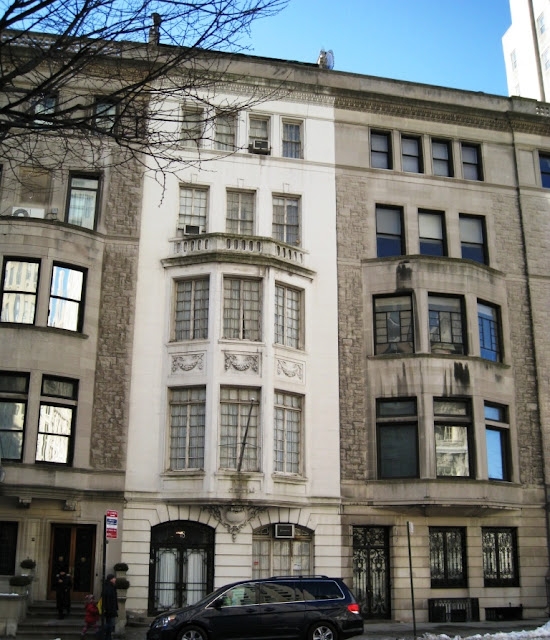 In January,1895 after the engagement of his daughter, Frieda, to wealthy Felix Warburg was announced, banker Jacob Schiff purchased from Robert W. Tailor the limestone mansion at No. 18 East 72nd Street as a wedding gift.

The 25-foot wide home, just around the corner from 5th Avenue and Central Park, was one in a series of stately French-inspired rowhouses. Sitting on a rusticated base with one wide, arched window balanced by the entranceway, it rose five stories. Supported by a stone cartouche among intricate carved leaves, the second and third stories bowed away from the façade, creating a stone balustraded balcony at the fourth floor.

The Warburgs were generous philanthropists and were active in social issues. Here in December 1905 a meeting of wealthy Jewish New Yorkers was hosted to discuss providing education aid for Russian refugees.

The relatively small house, however, proved inadequate for the Warburg’s growing family and social obligations. In 1908 they left No. 18 for their magnificent French Gothic chateau 20 blocks north on Fifth Avenue.

A year before Danforth moved in, Turin-born businessman Alphonso P. Villa married Philadelphia heiress Helen Lippincott in St. Patrick’s Cathedral. Villa was the president of the Villa Silk Corporation. By October 25, 1918 when their first daughter, Elena, was born, the family was living at No. 18 East 72nd Street.

The socially prominent couple would soon become the Count and Countess Villa and their home the site of glittering dinners and receptions. The four children – a son Anthony and sisters – grew up in a refined atmosphere of art and culture here and in their sprawling Tudor Revival estate in Newport known as Fairholme.

Countess Helen Villa died in 1956. In 2005 interior renovations were done when the house became, briefly, the Mission of Spain to the United Nations.  Today it is once again a stately private residence, the only home in the row to retain its original exterior architectural details and integrity.

non-credited photographs were taken by the author
Posted by Tom Miller at 2:44 AM