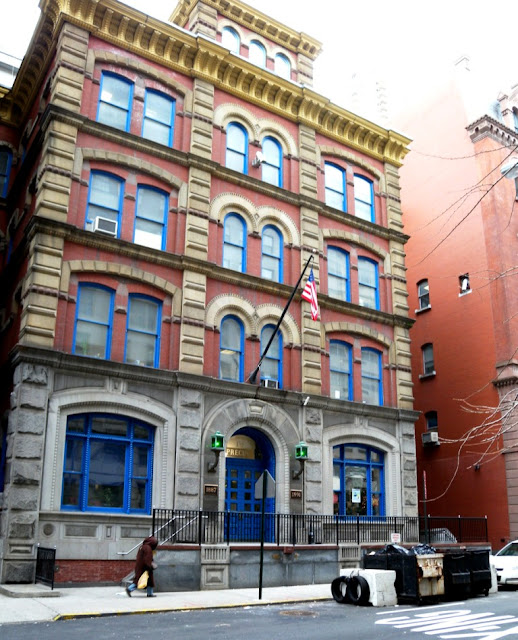 In the early 1880s, the 28th Precinct faced a problem. When the station house on 59th Street was constructed in 1851 the precinct, covering 58th Street to 79th Street and Fifth Avenue east to the river, was sparsely populated. There was little need for a major police presence.

Now, however, the area was developed and the station house, which The New York Times called “a little ramshackle structure,” was not large enough to accommodate the number of officers necessary to patrol the area. The precinct included a diverse population, from the 12,000 cigar makers who lived in the new tall tenements houses to “homes as happy as comfort and culture can make them,” on the west side, according to The Times. “But,” the newspaper said, “nevertheless, the streets in the eastern part of the precinct area infested with gangs of the worst ruffians in the city. They live in shanties built on the rocks and make themselves a terror to the neighborhood. They figure in the police courts as sneak thieves, pickpockets and vagrants.”

Residents petitioned the Commissioner for a new, larger station house with additional officers and when General Grant joined in, officials took notice. The city reserved a lot of land on East 67th Street where a new fire headquarters was planned, and the Board of Apportionment appropriated $70,000 for the structure.

Police sergeant Nathaniel Bush, who was responsible for designing the force’s new station houses from 1862 to 1895, laid out the plans and specifications. What he put on paper was much grander than what the Board of Apportionment had envisioned. The Times said “He put on paper a station house…much superior to anything of the kind now in the city.”

With accommodations for 150 policemen, it was a four-story Italian edifice of red brick with bluestone copings and terra cotta trimmings. Bush combined styles, drawing upon Second Empire, Romanesque Revival (specifically the German Rudbogenstil substyle), Neo-Grec and Renaissance Revival. The AIA Guide to New York City would later tall it a “Victorian palazzo…borrowing heavily from the Florentine Renaissance.”

The first floor would house the Sergeants’ desk and waiting room, and the Captain’s room. The second and third floor were reserved for dormitories for the officers and sleeping rooms for four sergeants. “The upper floor will be devoted to a gymnasium for the patrolmen, modeled on the one that the Seventh Regiment boys develop their limbs and strengthen their muscles with in the big armory,” said the newspaper.

Bush included up-to-the-minute innovations such as electric signals connecting the station house to all the schools, hospitals and other institutions to ensure prompt response and a prison connected to the building rather than adjoining it and lined with sheet iron “in order that the howlings of noisy drunken people locked in the cells shall not be heard in the school close by, or by people passing in the street.”

The ambitious building was estimated at $110,000; significantly higher than the appropriation.

Rather than compromise the precinct’s needs, the Commissioners decided to hold off on construction until the additional funds could be found.

Finally, on June 21, 1886 plans were filed with the Department of Buildings and construction began in December. Less than a year later it was completed and the officers moved in on November 30, 1887 – now called the 25th Precinct Station House after the department’s renumbering of the precincts in January 1887.

In April of the next year, Joseph Gilmartin (who sometimes went by the last name Murray) was arrested for horse stealing. None of Nathaniel Bush’s modern innovations mattered in the face of human complacence, however, and Gilmartin walked out of his cell to freedom without being noticed. “The turnkeys of the station will probably be obliged to stand trial,” said The Times.

Throughout the 20th Century the station house served the community, although, as with most civic buildings, problems arose. In August 1926 the state prison commissioner condemned the conditions for prisoners, saying the cells were “insanitary.”

By the 1970s the station house, now the 19th Precinct (it was renumbered the 31st in 1908, changed to 10A in 1924 and finally the 19th in 1929) had become dowdy and obsolete. Concurrently Hunter College planned an expansion, eyeing the site of the station house and the old fire headquarters building next door. The city began plans for new facilities at other locations and in 1974 the old prison building behind the station house was demolished.

The Landmarks Preservation Commission stepped in, designating and protecting four 19th Century structures including the station house, as landmarks. When the fire and police departments protested, the Board of Estimate overturned the designation in June 1980 to enable the demolition of the buildings.

The several agencies involved met, however, and Hunter College architects Ulrich Franzen & Associates proposed a solution. The rear of the vintage structures would be razed, the facades would be restored and a new structure erected behind them. The approved project under the guidance of the Department of General Services resulted in joining of the police station and the firehouse by a five-story granite structure 30 feet back from the sidewalk.. The station house now uses the upper stories of the old fire headquarters. The Hunter College portion, separate from the two civic buildings, was completed in 1986.

Carl Stein of Stein Partnership, along with structural engineer Robert Silman, spearheaded the renovation of the fire and police stations. The 19th Precinct House was cleaned, a new porch with handicapped access was installed, and the original metal cornice, too damaged for restoration, was replaced by a fiberglass copy. The renovations were completed in 1992 and the station house was re-designated a landmark in 1998.

Other than the new porch, the façade of Nathaniel Bush’s grand police station is essentially unchanged.
Posted by Tom Miller at 2:45 AM