A year before Peter Gilsey completed his elaborate Gilsey House Hotel two blocks to the south, Elias S. Higgins had built the Grand Hotel at Broadway and 31st Street. Higgins, a highly successful carpet manufacturer, commissioned Henry Engelbert in 1868 to design the hotel. Located just ahead of the northbound urban migration, it would also be conveniently near the 23rd Street entertainment district. German-born Engelbert established a reputation for creating striking buildings in the French Second Empire style.


For the Grand Hotel he followed suit. Turning to the new, fashionable hotel particuliers that began lining the streets of mid-19th Century Paris, he created five stories of white marble, resting on a ground floor of slender-pillared cast iron with wide glass shop windows, and topped by a two-story mansard roof. Engelbert chopped the corner off his hotel, creating a chamfer with one window per floor that allowed guests a view up Broadway.

Unlike Gilsey’s hotel, Higgins intended The Grand to be a residential hotel or family hotel. These were, essentially, apartment houses for tenants who had no intention of cooking for themselves, but would eat in a large, communal dining room. There was, therefore, no need for kitchens nor dining rooms in the apartments. Later, as the theatre district moved north towards Times Square it became financially sensible to convert it into a guest hotel.

In 1870 Henry Milford Smith leased and managed the hotel. In his 1884 New York’s Great Industries, Richard Edwards praised Smith as “the popular and enterprising proprietor of the Grand Hotel” and added “His son, Mr. Dinwiddie Smith, is a thoroughly practical hotel man, and actively associated with his father in the management of this magnificent hotel which has two hundred and thirty-three rooms.”

In 1904 the Grand was renamed The New Grand Hotel under the ownership of George F. Hurlbert, who owned two other hotels, one in Jamestown and another in Sharon, Pennsylvania. His thorough redecorating of the interior reflected an updated “Moorish” décor.

In 1920 daily room rates were advertised as:

﻿
﻿
Around World War II, however, Broadway around 31st Street had changed. The once grand neighboring hotels became commercial loft buildings. The Grand was now The Milner Hotel with fleabag rates of $1.00 to $1.50 a night. In 1957 the entire ground floor was remodeled and the wonderful cast iron and glass entrance was demolished.

By the 1980s the once proud Grand Hotel was a single occupancy hotel owned by Mocak Enterprises. Despite its 1979 landmark designation the owners painted the marble façade and the slate roof in 1987 without prior authorization by the New York Landmarks Preservation Commission – which doubtlessly would not have been forthcoming.

Robert Tincher, vice president of Mocak explained to The New York Times in 1993 “we painted the building to protect it.” The problem now was how to correct the violation. Leaving the paint on the marble could seal in moisture, causing the face of the stone to pull away. On the other hand, removal of the paint could damage the marble and the slate. The Landmarks Preservation Commission retained Building Conservation Associates to supervise spot testing of the face to determine the extent of damage removal of the paint would cause. 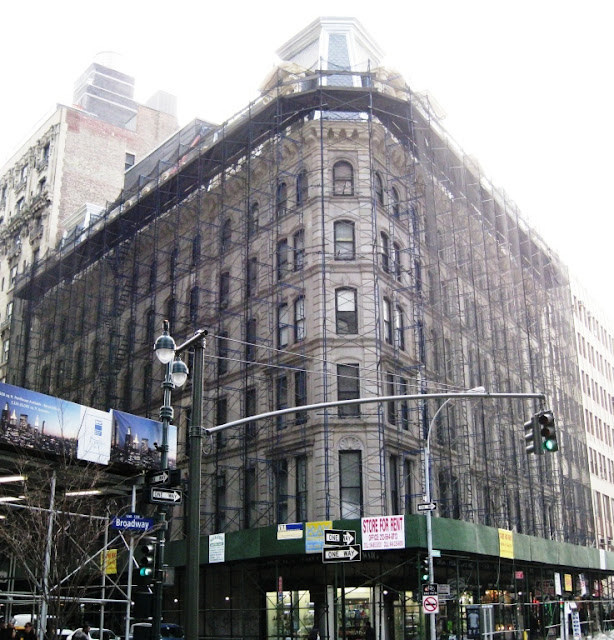 Today Elias Higgins’ Grand Hotel is owned and managed by 1234 Broadway LLC as the Clark Apartments.   In 2010 netting and scaffolding covered the building as KRA Associates headed up restoration efforts of the facade.  Slowly, inch by inch, the white marble and the black slate of the roof are re-emerging and the Grand Hotel sits waiting for its former glory to be rediscovered.

non-credited photographs were taken by the author
﻿
Posted by Tom Miller at 2:26 AM