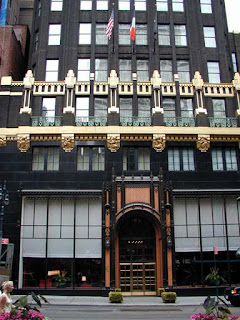 In 1922, Raymond W. Hood, at 41 years of age, had not accomplished a great deal in his design career. After studying architecture at the Ecole des Beaux-Arts in Paris and working for Cram, Goodhue Ferguson, he found himself designing radiator covers for the American Radiator Company.

That year, however, John Mead Howells entered a design competition for the anticipated Chicago Tribune building. He urged Hood to join the competition as well. Inspired by the noted neo-Gothic structures by Cram, Goodhue Ferguson with which he was familiar, Hood submitted a spectacular neo-Gothic tower design that won the commission.

Within a year, rather than designing radiator covers for the American Radiator Company, he was designing their new New York headquarters on West 40th Street across from Bryant Park.  Working within New York City’s 1916 zoning law that required setbacks for tall buildings, Hood designed a striking 23-story skyscraper in black and gold. His neo-Gothic ornamentation coupled with the overall sleek geometric lines anticipated the Art Deco craze that would soon sweep Manhattan architecture. 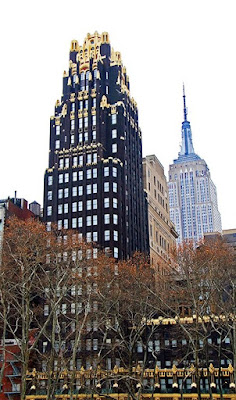 To solidify the mass of the building, as well as to diminish the interruption caused by contrasting windows (Hood once said that the clash of dark windows against light-colored stonework made buildings look like “waffles stood on edge”), he broke architectural tradition by using black brick with gold accents. 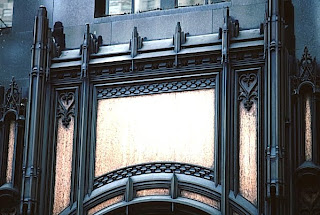 Hood’s building was completed in 1924. The street floor is faced in polished black granite. The framing of the show windows and arched entrance are in Gothic-inspired bronze. As the tower rises to the 16th floor, gold detailing accentuates the first setback. Each succeeding setback is treated with more and more gold accent, until the crown of the structure is more gold than black. Two years after the building’s completion, architectural historian Talbot Hamlin praised it as “the most daring experiment in color in modern buildings yet made in America.” 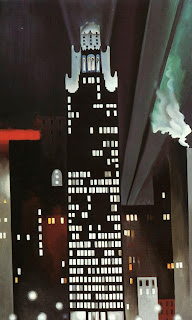 Instead the splendid building sat empty for a decade until, in 1998 Philip Pilevsky purchased it for $15 million. Doing what Clio Biz never got around to doing, Pilevsky started conversion into The Bryant Park Hotel.

Appropriately, he commissioned British designer and architect David Chipperfield, who had designed fixtures for American Standard, to design the hotel. Chipperfield managed to bring the visitor from the 1920s outside to the 60's-inspired 21st Century inside with brilliant colors and vibrant designs. The lobby area, once decorated by Hood with black marble and mirrors, has burgundy leather walls.  Many of the high-end details and fixtures are custom-designed for the space and below the lobby level a magnificent vaulted-ceilinged cavern houses the Cellar Bar and a restaurant. 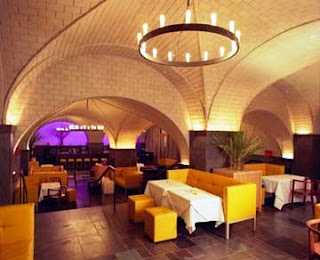 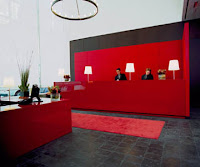 After sitting vacant for ten years, Raymond Hood’s tradition-breaking creation is living a new life.
Posted by Tom Miller at 3:02 AM