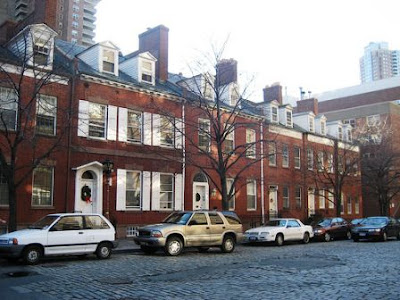 If you can count on one thing in New York City, it is that neighborhoods change.

The area around Washington Street and Harrison Street was originally part of Annetje Jans’ 62-acre farm. Eventually it became property of the English crown, then in 1705 it was transferred to Trinity Church. By the end of the 18th Century, prosperous merchants and professional New Yorkers were erecting fine Federal-style houses here.

John McComb, Jr., New York’s first native-born architect, built his home at 317 Washington Street in 1797, five years before he would design City Hall with Joseph Francois Mangin. In 1804, across the street at 314 Washington, wealthy merchant Jonas Wood built his house. By the 1820s construction was booming along Washington and Harrison Streets as homes were built to specification for individual buyers; unlike the speculative developments being constructed elsewhere.

Ebenezer Miller, who ran a printing business on Greenwich Street, built No. 33 Harrison. Wilson Hunt, a well-heeled merchant on Pearl Street, erected 327 Washington Street. By 1830 the neighborhood was completed and fashionably dressed home owners greeted one another before their elegant red brick homes. Inside detailed plasterwork adorned the ceilings and parlors were decorated with costly carpets and Duncan Phyfe furniture.

But if you can count on one thing in New York City, it is that neighborhoods change.

Slowly the Washington Street Market crept closer to the Harrison Street area. Although two of the original families were still in occupancy in 1850, by the end of the Civil War the homes were being converted to rooming houses, crammed with immigrant workers.

As the 20th Century neared, the Washington Street Market had engulfed the old neighborhood. Loft buildings and warehouses replaced elegant Federal homes; however for some reason a handful of the houses were simply recycled rather than razed. The residences of John McComb and Ebenezer Miller were turned into businesses. The Columbus Celery Company did business out of 314 Washington – ripping out the parlor floor façade and replacing it with warehouse doors. McComb’s home was taken over by Silverbank and Arbeiter, who junked the elegant mantles and interior details to make room for modern commerce.

Astonishingly most of the surviving houses retained their second floor details, roofs and dormers. 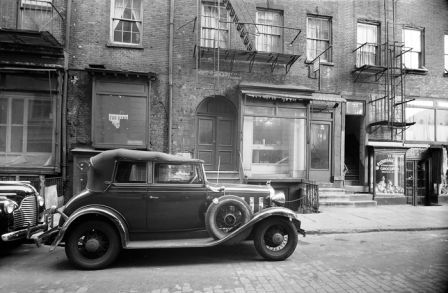 The houses remained as warehouses for three-quarters of a century until the entire area was threatened with demolition by the planned Washington Market Urban Renewal Area in the mid 1970s. A wide swath of buildings were slated to be demolished. The fledgling New York Landmarks Preservation Commission, however, deemed nine of the Federal-period buildings worthy of preservation, even in their severely altered condition. The Commission negotiated funding to move and restore the houses as part of the Renewal project. 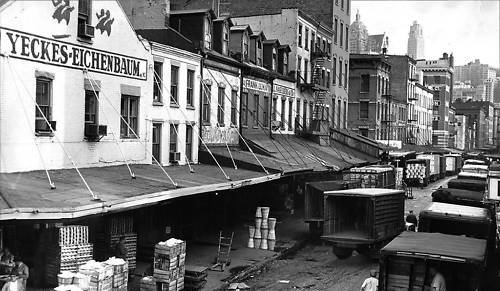 Washington Street mid-20th Century with four Federal Houses - NYPL Collection
Architects Oppenheimer, Brady & Vogelstein who were designing the 40-story Independence Plaza Tower nearby, were given the task of salvaging the old homes. The three Washington Street houses were moved to Harrison Street, creating a row of six. Three other Harrison Street houses remained on their original sites, forming an L-shaped enclave.
The architects replicated the lost facades, installing new doors, windows and trims. The replacement bricks were sandblasted to simulate aging; but, according to Herbert Oppenheimer, “we didn’t want it to match perfectly.” 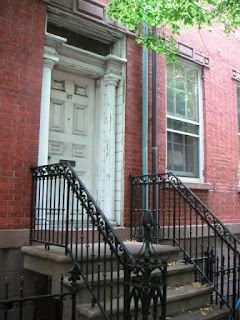 Immediately architectural critics and historians complained. In his The City Observed: New York Paul Goldberger disparaged the project saying "There are facades at Disneyland that look more real, and all that these houses make you want to do is run back again across Greenwich Street where old buildings are still real and not kept alive by artificial respirator.”

Norval White and Elliot Willensky, in their AIA Guide to New York City noted that “They have been lovingly restored - perhaps too lovingly; the patina from the passage of time has been totally erased.”

New Yorkers, however, didn’t seem to mind. The City began offering the properties, all with unfinished interiors, for between $35,000 and $75,000 and the houses quickly found new owners.

Today the lost “patina from the passage of time” is coming back. Three decades of weathering has given the replacement brick a warm, aged look.

Despite the critics who denounced the impure restoration; an important remnant of early 19th Century Manhattan has been salvaged and a charming residential enclave created in the midst of a bustling city. 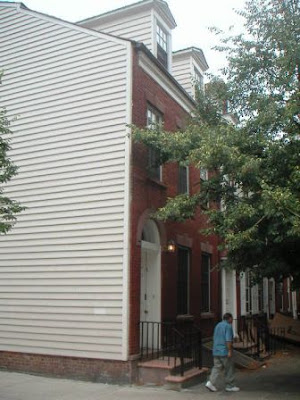 Which just proves that if you can count on one thing in New York City, it is that neighborhoods change.
Posted by Tom Miller at 3:16 AM