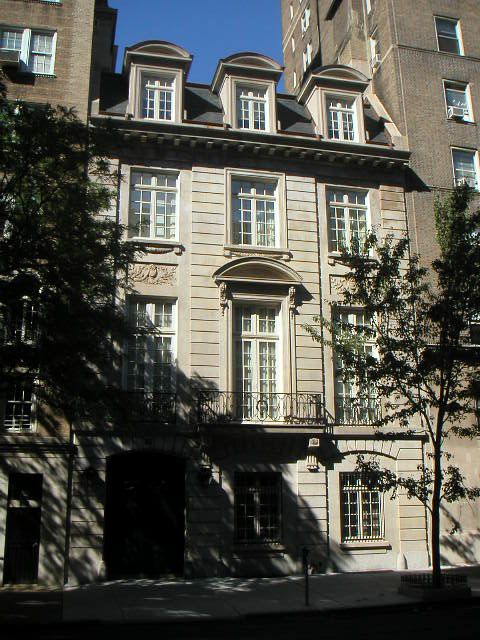 In March 1912 Eric B. Dahlgren learned a painful lesson – do not cheat on Lucy Drexel Dahlgren.

Lucy was a member of the socially prominent and fabulously wealthy Drexel family of Philadelphia. Her father had founded the Parisian banking firm of Drexel Harjes Company, later to be part of the Morgan firm.  Eric Dahlgren was known as a playboy millionaire, the son of Rear Admiral John A. Dahlgren who invented the Dahlgren gun during the Civil War.

On December 11, 1890 the pair was married in Philadelphia’s cathedral by Archbishop Corrigan in the social event of the year and shortly thereafter moved to New York City.  Over the course of their 22 year marriage, Lucy bore eight children. They had an imposing mansion at 812 Madison Avenue at 68th Street as well as a “country seat” at Lawrence, Long Island.

While Dahlgren was comfortably wealthy, Lucy's personal fortune was substantial.  Upon the death of her father she inherited $20 million and in 1912 she received another $5 million from her mother’s estate.

Things in the Dahlgren household soured when the devout Catholic Lucy discovered that her husband had committed “misconduct” on the 13th and 14th of March 1912 at an apartment house at 54 East 59th Street, just two months after her mother’s death. Within a week she filed for absolute divorce in a handwritten complaint. The New York Times reported “the reason it had not been typewritten was that Mrs. Dahlgren wished the suit to be filed at once.”

Lucy gathered up her eight children, ages 9 through 21, and steamed off to Paris to wait out the proceedings. Eric took up lodging in the University Club. When it seemed that her husband might make things difficult, Lucy threatened to make the already-scandalous hearings public. Eric relented.

While abroad, Lucy was introduced to Ogden Codman, Jr., an architect and interior designer born to a prestigious old Boston family who had grown up in Paris.  Codman had fallen in love with everything French, including its architecture. He wrote, in partnership with Edith Wharton, the widely-read Decoration of Houses and from his office in New York City had decorated mansions for New York's old guard including Cornelius Vanderbilt II – refusing commissions from the nouveau riche. The pair became socially friendly.

A year later, the divorce decree was granted and Lucy Drexel Dahlgren returned to New York, establishing herself temporarily at 11 East 45th Street. She was, however, not done with Eric Dahlgren.

Immediately after the divorce was finalized, Lucy’s attorney demanded the keys to the Madison Avenue mansion from Eric Dahlgren. Insisting that the furnishings had been purchased with her money, Lucy wanted them back.  Eric resisted.

She had the house burglar-alarmed (The Times reported that “The Holmes protective wires, which were so skillfully eluded by the robbers in the Hester Street pawnshop, were strung about the house, so that no raid on the property could be made without causing complications”) and stationed sheriff’s deputies at the door. Once again Eric was forced to give in and the house was emptied of the furniture, artwork, silver and glassware. “The one room which the movers left untouched was the big room at the second story back – Mr. Dahlgren’s bedroom,” said The Times.


Unable to maintain the upkeep, Dahlgren lost the Madison Avenue house to foreclosure by the Mutual Life Insurance Company.  On November 3, 1914 a “To Let” sign was hung on the door.

In the meantime Lucy moved on.  In February of 1915 she purchased a plot at 15 East 96th Street, just east of the French townhouse Odgen Codman had built for himself two years earlier.  It was here that he envisioned a picturesque enclave of French houses lining both sides of 96th Street.


Lucy commissioned Codman to design her home, which was completed in 1916. The 30-room, three-and-a-half story, Louis XVI-style house was as Codman intended – a slice of Paris in New York. The limestone façade, the slate mansard roof and the arched dormers echoed the French architecture he so admired.  Inside were two marble fountains, eleven bathrooms, an octagonal dining room, a sweeping marble staircase, and carved marble fireplaces. To accommodate her motor-cars, a turn-table at the back of the property would reverse the direction of the parked cars so they could easily drive out again.  Three turbines ran the two-manual Estey organ and roll player installed in the second floor drawing room.

The attraction of New York had faded for Lucy Dahlgren, however. Except for occasional entertainments for her daughters at Sherry’s or The Colony Club, she spent more and more time in Paris, Florence and Newport . By 1922 she left 15 East 96th for good, renting it to Pierre Cartier and finally selling it to him in 1927.


The Cartier family used the Dahlgren house as a pied-a-terre only, preferring to stay in their 35-room, 19-acre estate in Roslyn Harbor, Long Island. The 96th Street house was used for entertaining French dignitaries, intellectuals and artists, and was frequently used during World War II to entertain exiled French countrymen. Poet and playwright Paul Claudel was often a guest in the house.

Upon his retirement, Cartier sold 15 East 96th Street to the Roman Catholic Church of St. Francis de Sales, which used it as a convent. Little alteration was done to the interiors while the nuns lived here and in 1981 it was sold to financier Barry Turpin for $3 million to be used as a private residence once again. Turpin updated the plumbing, wiring and temperature control systems.

A full restoration was initiated when, in 1987, businessman Paul Singer purchased the house for $5.7 million.  Singer brought in European architects most familiar with the Beaux Arts period for advice, after which a two-year restoration was executed by Thompson/Robinson/Toraby Architects, winning them the “Friend of the Upper East Side Historic Districts” Award in 1989.

In 2004 a second restoration was completed by Preserv that repaired and replaced copper cladding, replaced and restored the decorative railings, replaced the roof, and patched and repaired the limestone façade. The following year the organ, thought to be the last extant Estey Player Organ in the city, was removed to storage in order to make space for an additional bathroom. 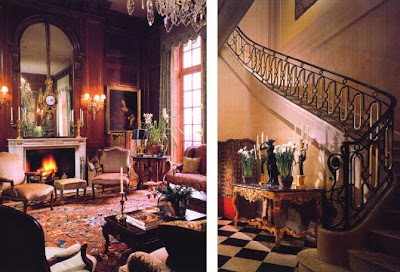 Lucy Drexel Dahlgren’s French townhouse – at once charming and imposing -- has never been seriously altered.
Posted by Tom Miller at 3:00 AM