In 1846 the State of New York authorized the construction of a new munitions depot for New York City’s National Guard. A site was chosen in the countryside far to the north where it was felt that troops could be easily deployed to either shoreline or south to the city. Architect Martin E. Thompson designed the structure, a crenellated fortress with half-octagonal towers on either corners.

Construction began in 1847 and was completed four years later. Based on a medieval gatehouse it was built of grey English bond brick.

As later reported in The New York Times, “…the second floor was reached by iron stairs built on the outside. On the balcony at which the two stairways met was the coat-of-arms of the State of New York in wrought iron and the windows on either side were made narrow and thin like those of a jail. Why New York State built its arsenal of nothing more substantial than brick with its access to it by stairways on the outside where a single cannon shot would destroy them and cut off all access to or egress from the building is one of the great mysteries of New York.”

State Controller Millard Fillmore – later to become the 13th President of the United States – oversaw the funding of the $30,000 project.

The new Arsenal, however, sat disruptively within the huge plot that New York City was planning to turn into Central Park. Two years after the building's completion in 1851, the City began a 3-year appropriation of the land it needed. In 1857 it purchased the Armory from the State for $275,000, emptied it of the munitions and arms, and established the administrative functions of the planned park within it.

As Calvert Vaux’s and Jacob Mould’s fanciful and colorful buildings and terraces began taking shape on paper, many felt that the medieval and militaristic-looking Armory did not fit in. In 1859 George Templeton Strong, never one to hold back his opinion, called it the "hideous State Arsenal Building," and hinting at civic-minded arson hoped "this eyesore” would “soon be destroyed by accidental fire."

Two years before Strong was voicing his disgust, the 11th Precinct Police Station House had already been established in the Armory. And in 1859 the police began sharing its space with the new Central Park “Menagerie.” Cages were erected outside as well as in the basement and exotic animals were donated by philanthropists like August Belmont and showman P. T. Barnum.

James D. McCabe Jr wrote “On the east side of the Park…is an old building which somewhat resembles the Cadet barracks at West Point. In the lower stories and in several buildings around it is a fine collection of animals, birds, and reptiles, constituting the Menagerie of the Park. In the winter the collection is greatly enlarged by numerous animals and birds which are sent here for safe keeping by traveling shows which go into quarters in New York during the cold season. This is a favorite resort with visitors, especially with children, and is always crowded." 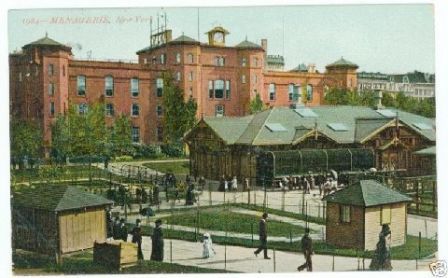 The animals and the police were further crowded when, at the outbreak of the Civil War, the Arsenal was pressed into military service again. The militia was housed here in improvised barracks while awaiting deployment to the front. The grassy area in front of the building became “the parade ground of the scores of regiments passing through the city,” and returning soldiers were quartered here before returning home.

Immediately after the War, the building found yet more new uses. In 1869, in addition to the menagerie, it housed a new museum which would eventually become the American Museum of Natural History. Here esteemed British paleontologist B. Waterhouse Hawkins labored, reconstructing the skeletons of dinosaurs in a specially constructed workroom. An Gallery of Art was established on the first floor that same year and the Municipal Weather Bureau’s instruments were installed on the roof.

The Arsenal was bustling with activity.

In 1870 Jacob Wrey Mould was brought in to redesign the interiors and a year later, faced with numerous complaints about the stench and “great insecurity and danger,” the beloved menagerie was moved out.

Always a point of visual controversy the Arsenal was threatened again in 1912 when Henry Clay Frick proposed to dismantle the old 1877 Lenox Library, now vacant with the opening of the New York Public Library on 5th Avenue, and re-erect it on the site of the Arsenal. Frick’s gift was turned down, an act Mayor William J. Gaynor viewed as an insult to Frick and announced that he was “determined” to demolish the Arsenal, calling it “unsanitary and unfit.” The New York Times chimed in, siding with the Mayor and labeling it “an eyesore, fetid with the smell of the stables and the nearby menagerie” and saying “the old structure was never a thing of beauty, even in its palmiest days.”

Although the building survived the threat, the Parks Department offices left the Arsenal in 1914, moving to the new Municipal Building downtown. The building sat neglected and essentially empty, other than the weather instruments on the roof. In 1916 the Department considered razing the building, although nothing was done. Instead it sat for nearly a decade decaying.

In 1922 The New York Times, which had once so vigorously condemned the Armory, lamented “New York does not destroy its old monuments, it ignores them. Such has been the fate of one of the oldest structures devoted to public uses in the territory north of Fifty-ninth Street – the Armory in Central Park.

The article continued “...the first State arsenal erected to safeguard the greatest port in the world and the greatest city in America stands facing palatial and opulent upper Fifth Avenue, dilapidated and deserted, with broken windows, cracked lintels, a rickety iron staircase, uneven board floors and more holes in the roof than there are spots on the skin of the leopard in a cage near by…while 'The Arsenal!' is a sinister monument to the neglect of those charged with its maintenance and preservation.”

A contrite City appropriated $75,000 to restore the Arsenal, converting much of the interior space for Parks Department offices. New turrets and a clock were constructed, and basement storage areas were added. A secret passage under the building was discovered which was possibly intended for the covert movement of munitions.


A decade later Commissioner Robert Moses supervised yet another complete conversion of the structure installing his office and command center here. Sandblasting removed decades of paint from the brick and the military-themed details – the entrance door’s cannon balls and drums, and the cast iron rifle stair balusters – were added. WPA artist Allen Saalburg adorned the interior walls with historically-themed murals. 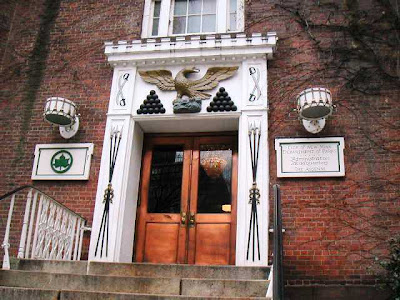 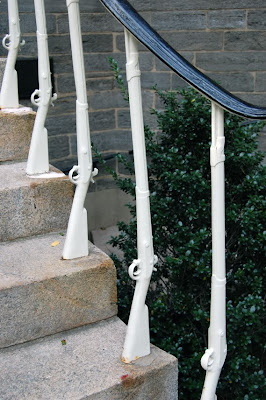 The often-maligned Armory was declared a New York City Landmark in 1967.

In 2008 the department completed a $5 million structural restoration focused, mainly, on water leaks.

Since the early 1980s much of the interior of the Arsenal has been devoted to gallery and space for public forums. Fine art and photography shows are exhibited here throughout the year with preference going to those highlighting the environment, urban issues and parks history.