After the consolidation in 1898 of the five boroughs into the New York City we know today, the police department rapidly and necessarily grew. By the turn of the century plans were being laid for a new police headquarters.

In those days of the City Beautiful Movement – the principle that civilized buildings foster civilized behavior – a grand civic edifice was envisioned. Architects Hoppin & Koen, known principally at the time for their building of ornate Beaux Arts mansions, were commissioned for the project. 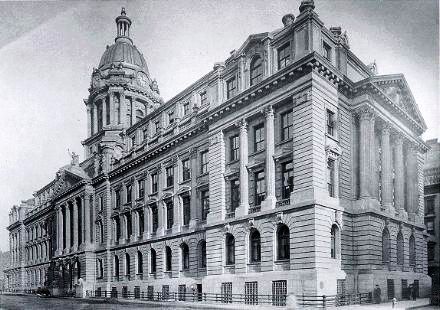 Label it what you will, the building is extravagant and grand.

Diana S. Waite, in her book Architects in Albany, says "Hoppin's Beaux Arts training is evident in ornate town houses for such clients as James Lanier but is apparent more dramatically in the New York City Police Headquarters at 240 Centre Street. This monumental, domed structure, constrained on a triangular lot, was designed ‘to impress both the officer and prisoner with the majesty of the law.’”

The interior of the building housed both the functional and the imposing. The marble-clad reception area was palatial. In the basement was a gymnasium and a firing range. On the top floor was an observation deck.

Hoppin & Koen based the beautiful dome loosely on that of the Hotel des Invalides in Paris and stopped the building short of the northern point of the triangle of land in order to provide a small fenced garden, a highly unusual touch for a government building.

Here was the office of controversial Police Commissioner Theodore A. Bingham. On one hand, Bingham was a reformer with a history of fighting Tammany Hall and the Black Hand – the Italian gang loosely relating to today’s mafia. From here Bingham ran the first “secret service” in the country to infiltrate and convict gang members. On the other hand, the commissioner was a notorious racist – what we would today call a profiler.

The Jewish community was enraged when Bingham told The North American Review “It is not astonishing that with one million Hebrews in the city (one quarter of the population) perhaps one half of the criminals should be of that race; when we consider the ignorance of the language, more particularly among men not physically fit for hard labor, is conducive to crime…They are burglars, firebugs, pickpockets and highway robbers – when they have the courage; but though all crime is in their province pocket-picking is the one to which they take most naturally…”

It was here on June 9, 1970 that the radical Weathermen group planted 10 sticks of dynamite. Jane Alpert and William Ayers admitted responsibility, claiming the bombing was in response to “police repression.”

Three years later the New York City Police moved to its new headquarters at One Police Plaza, leaving 240 Centre Street abandoned for years while a new use was debated. For a while it seemed that the majestic old headquarters would become a luxury hotel. The design firm S.I.T.E. partnered with architects and Canadian-based developers for this goal; however because of the awkward geographical placement of the building, funding was elusive.


After sitting empty for over a decade, the building was converted into cooperative apartments by developers Arthur D. Emil, John J. Ferchill and Edward R. Downe Jr. Having purchased the building from the City in 1983 for $4.2 million, the group commenced a $20 million renovation. The firm of Ehrenkrantz Group & Eckstut adapted the space for 55 apartments. The original stately lobby was preserved however most of the interior was gutted and reworked.

With high ceilings and floor plans unique to each apartment in the former headquarters attracts residents like Calvin Klein, Stefi Graff and Leonardo DiCaprio. You too could live here. The four-bedroom apartment in the old gymnasium was reduced in price in May 2010 to $16.75 million.


240 Centre Street is an exceptional example of early 20th Century monumental architecture in a most unexpected location.
Posted by Tom Miller at 2:54 AM