As the 19th Century came to a close, Chicago architect Louis Sullivan balked at the then-current trend of borrowing architectural styles from bygone eras. In a time when acclaimed buildings were styled in Beaux Arts, Classical Revival, Medieval Revival or Romanesque, Sullivan looked instead to the present – or the future.

A guru of fledgling Frank Lloyd Wright, Sullivan worked in Chicago and designed buildings that left New York architecture in the dust of the past. He felt that the building should reflect the structure, and not pretend to be something it was not – leading to his famous credo “form ever follows function.”

In August 1897 the United Loan and Investment Company purchased the Bank of Savings at 65-69 Bleecker Street with the intention of razing the brick structure and erecting an office building. In a surprising announcement The New York Tribune reported that the new building, to be called the Bayard Building as a nod to one of New York’s oldest and most prestigious families, would be designed by Louis H. Sullivan.

Sullivan’s practice when designing a building away from Chicago was to work with a local architect; in this case Lyndon P. Smith. Just three days after the title to the property was transferred, plans were submitted to the Manhattan Building Department. Because of New York City building policies, however, Sullivan had to rework his plans several times.

Finally in December 1897 ground was broken; despite all the design kinks still not having been worked out with the Department of Buildings. Because of all the ongoing complications, the Bank for Savings recalled the mortgage in June of 1899, and the unfinished building and property was taken over by Emmeline and Silas Condict. When the 13-story building was completed in December of that year, the Condicts renamed it The Condict Building. It was a short-lived renaming.

The structure’s builder, Charles T. Wills, purchased it from the Condicts in May 1900 and it became known as the Bayard Building once again.

By any name, the Bayard Building is a stunning structure. The elongated, slender pillars rising nearly to the cornice accentuate the verticality of the building. The result typifies the architect’s description of a skyscraper as “a proud and soaring thing.” Completely facing his building in white terra cotta, Sullivan lavished it with complex ornamentation. According to Columbia University’s Andrew S. Dolkart, the facade was not only executed in terra cotta “…but very expensive terra-cotta. The clay was both molded and hand carved to give it a very deep ornamental detail.” Outstretched angels separate the arches under the decorative cornice of what would be Sullivan’s only New York building. 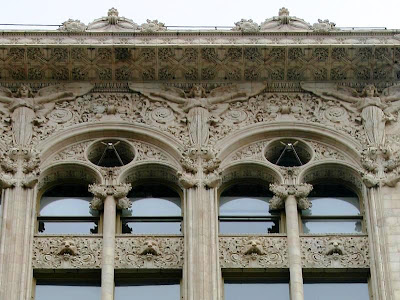 Photo by Hubert Steed
Architectural historian Paul Sprague described Sullivan’s energetic terra cotta embellishment as “a continuous and unimpeded undulating movement.” In 1898 French author Jean Schopfer termed the Bayard Building as “the best skyscraper yet erected” and Russell Sturgis, that same year wrote ‘There is here no pretense that the building is a massive structure of cut-stone, and no pretense that it allows of treatment in the modern classical way with orders and classical proportion. The whole front is a careful thinking-out of the problem, how to base a design upon the necessary construction in slender metal uprights and ties.”

Montgomery Schuyler, in the Architectural Record, praised Sullivan’s building. “The actual structure is left or, rather, is helped, to tell its own story. This is the thing itself. Nobody who sees the building can help seeing that…the Bayard Building is the nearest approach yet made, in New York, at least, to solving the problem of the sky-scraper.”

It was indeed, according to the New York Landmarks Commission, “the first truly modern skyscraper.”

Times and tastes change, not always for the better. In 1947 and again in 1964 the street level was remodeled and Louis Sullivan’s original designs stripped away. In August 1976 the National Register of Historic Places lamented in its nomination form that “the building stands today little appreciated by its tenants but suddenly and glowingly visible to those sensitive to its marvelous ornament.”

In 1996 the owners retained restoration architect Wank Adams Slaving Associates to restore the entire façade. The process was long and excruciating. Each of the 7000 terra cotta tiles was inspected. Of the 1300 that were damaged and had to be removed, only 30 were irreparable and had to be replicated. The rest were carefully repaired and reinstalled. One of the elaborate original store front column capitals that had been removed during earlier renovations was found in the basement of the Brooklyn Museum of Art. WASA was able to replicate the capitals based on this sole survivor and reinstall them.

Louis Sullivan never designed another New York City building. An alcoholic, he died penniless and his now-famous and wealthy student, Frank Lloyd Wright, paid for his funeral and burial.