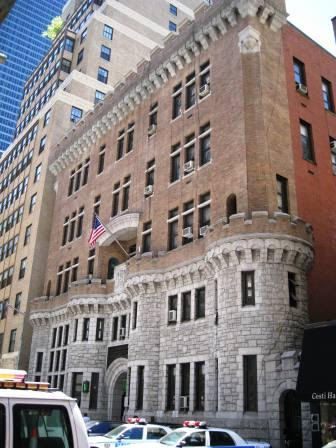 It was clear to Police Commissioner William McAdoo in 1905 what he wanted the new Tenderloin Police Station to look like.  It should look like a police station.

Plans had been underway to replace the old 1869 station on West 30th Street for some years. The New York Times reported in November 1903 of the decrepit condition of the precinct house, commenting on numerous missing panes of glass, sick policemen sleeping in their uniforms, vermin, and "evil smelling gases." Architect R. Thomas Short had completed plans that year for a replacement station, however the police commissioner at the time, Francis Greene, stalled the project.

The Tenderloin District, policed by the 29th Precinct, covered roughly 23rd Street to 42nd Street, between Fifth and Sixth Avenues. It was the most crime-ridden section of the city and possibly of the country. The streets were lined with brothels, saloons, and gambling parlors; and graft and corruption among the police was rampant. The area got its nickname when Alexander “Clubber” Williams was given command of the 29th Precinct in 1876. He gleefully noted that he was looking forward to getting some of “the tenderloin” after working hard in other sections of the city. And, indeed, Captain Williams retired in 1895 a millionaire.

Social reformers did not refer to the area as "The Tenderloin."  Instead they called it “Satan’s Circus.”

When McAdoo took over as Commissioner he said of the 29th Precinct, “The Tenderloin precinct, as every one knows, is the most important precinct in New York, if not in the United States, or probably in the world, from the amount of police business done there and from the character of the neighborhood.”

So when land across the street from the old 29th Precinct House was procured for a new station, McAdoo pulled out Short’s former plans.  He was not pleased.

“Outwardly,” he said, “it looked like a second-class apartment house. It gave no suggestion of its official character, and the internal arrangements were more fanciful than practical. The architect had followed the usual lines with regard to these structures.”

McAdoo summoned R. Thomas Short.  He instructed the architect to make “radical changes” and to make it “look like a police station.”  He then put together a committee of inspectors and policemen with more than 30 or 40 years experience and committed them to work with Short “to see that the plans were made practical and in keeping with the real wants of the police: that prisoners, for instance, would not be exposed in coming from the patrol wagons to the gaze of passers-by and young children in front of the station house... In a word, that all those things which experience shows essential to be found in station-houses would be in the new building”

When the plans were completed, McAdoo beamed “I feel sure that this new building will really be a model station-house.”

In May 1906 demolition of the old buildings on the site began. McAdoo’s successor, Commissioner Theodore A. Bingham gave The New York Times an idea of what was to come. “A station that shall resemble a warlike armory." It would have, he explained, more and roomier cells and dormitory quarters, and a stable in the rear yard.  A four-story structure with a mezzanine floor, it was projected to cost $154,000. 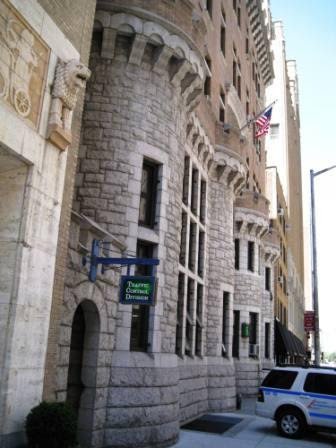 The Real Estate Record & Guide documented the plans that year.  “The exterior will be of brick and granite, with bluestone coping. . . The drawings show a massive edifice. . . of castellated design. Entrance is through an archway into a central court...Part of the first floor and the mezzanine floor are to be the headquarters of the police inspector assigned to the Tenderloin.  Both these floors will contain muster rooms for the 'cops.' The upper floors are to be fitted as dormitories finished with up-to-date sanitary arrangements”
The Record and Guide, which in 1898 had complained that "there is not even one architecturally decent police station" in the city, was about to eat its hat.

Finished in May 1908 (the precinct had by then been renumbered as the 23rd), the stone and brick Medieval Revival fortress was like no other police station in the city. The Police Department's annual report in 1908 declared that "It is no boast to claim that this is the finest [station house] in the United States, both architecturally and in interior arrangement.”  The final cost, including furnishings, was $208,000.

There was no doubt, as Commissioner McAdoo intended, that this was a police station and not an apartment house. 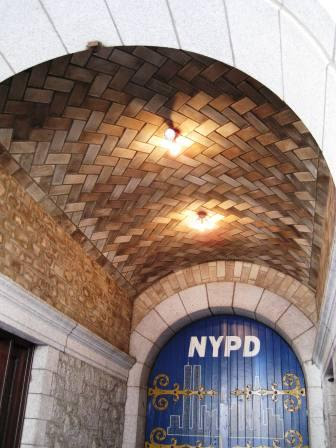 As the building was being erected, a decision was made at headquarters that the 23rd Precinct would be assigned for automobile patrol only--one of the first station houses so designated. The arched ceiling of the central automobile entrance was faced with Guastavino tiles; Rafael Guastavino having done the striking arched ceilings of the City Hall Subway Station a few years earlier in 1904.

Simulated medieval towers flank the sides of the building and a heavy cornice and crenellated parapet lend to the overall fortress-like feeling of the station.

Over the years the station house lost the identification with the Tenderloin.  Renamed multiple times (the 23rd until 1924, the 7th until 1929, and then the 14th until Traffic Control took position in 1969) it remains an active station house of the New York Police Department today.  And it also remains one of the most visually fantastic of all the precinct houses.
photographs by the author
no permission to reuse the content of this blog has been granted to LaptrinhX.com
Posted by Tom Miller at 2:41 AM