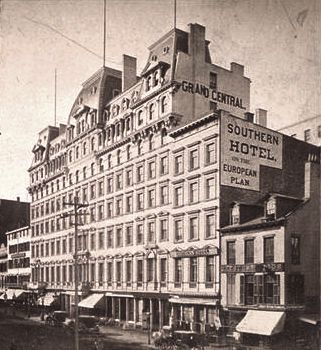 NYPL Collection
Elias Higgin’s 1868 Grand Hotel at Broadway and 31st Street had been opened less than a year before the carpet manufacturer again called upon architect Henry Engelbert to design another, even more impressive hotel in 1871.


Higgins chose to build on the site of the recently burnt LaFarge Hotel, on the west side of Broadway just above Bleecker Street. Here Englebert created another Second Empire pile – what James D. McCabe, Jr. called in 1882 “a monster establishment.” The marble-fronted hotel rose eight stories with a dramatic mansard roof. The largest hotel in the United States, it boasted 630 rooms.

As the structure rose, The New York Times reported on November 11, 1869 “Three elevators, which will perform the trip from the first floor to the attic in thirty seconds, will be in use for the benefit of guests night and day. One item alone - upholstery and furniture - will involve an expenditure of $1,000,000. the articles mentioned having been ordered from Paris and this city." 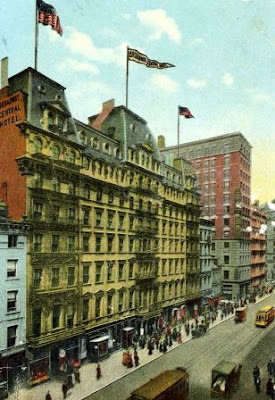 The article continued, "The halls and rooms will require carpeting sufficient to cover seven acres, and will be of the finest quality - Brussels and velvet. All the rooms will be heated with steam, and on each floor hydrants, hose, and everything necessary will be furnished to extinguish fire. There will be three large dining-rooms extending from the main hall on the second story to the Mercer street wall, the largest of which will accommodate 500 guests. There are at present; 350 men employed on the building.”  The total cost was to exceed $1.6 million.

Higgins' hotel was an instant success. Diamond Jim Brady and Lillian Russell patronized its dining rooms. In 1876 meetings were held here which resulted in the formation of the American Baseball League. It was here on the winding marble staircase in 1872 that Jim Fisk was murdered.  In its eight ballrooms, well-dressed ladies and their escorts waltzed under gas-lit chandeliers.

The name of the hotel changed throughout the years from The Broadway Southern Hotel to the Grand Central Hotel to the Broadway Grand Hotel and, in 1892, to the Broadway Central when Tilly Haynes took over.  Haynes spent $150,000 to bring the hotel up to date.  In their New Reference Map and Guide to New York City, Rand, McNally & Company said that the hotel "has been entirely refitted, refurnished, artistically decorated throughout, and provided with all the appliances of convenience and luxury which the science and taste of the day can suggest."

"Few hotels so handsome, and none whatever so comfortable, exist in the city as the new Broadway Central, with its magnificent halls, grand staircases, and splendid parlors occupying its entire Broadway front."

In 1923 wealthy businessman Meyer G. Manischewitz purchased the hotel.  Once again the interior was renovated.  Manishewitz added a $12,000 marble floor inlaid with a large brass Star of David and the name of the hotel in English and Yiddish.  Before long the hotel had established a reputation as providing the best kosher banquets in Manhattan. The New Yorker, in 1934, wrote that the Broadway Central offered “seven sets of period rooms for wedding purposes, each set consisting of a reception-room, a bride’s room, a dining-room and a ballroom.” 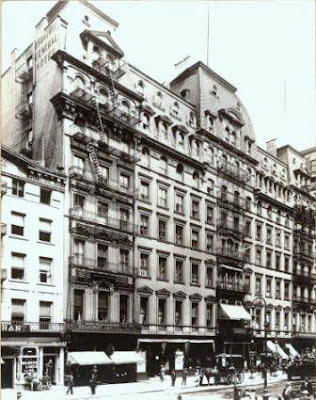 Both the area and the hotel declined, however, and a year after Henry Dercher and Matilda Edwards bought the building in May of 1969, they were taking in welfare clients at $5 per night with as many as seven people to a room. Occupants complained of rats, exposed wiring, prostitutes and drug addicts. A child fell to her death into an unprotected stairwell. Attorney General Louis Lefkowitz attempted to shut down the hotel, exhibiting glossy photos of garbage piled in the hallways and calling it “a squalid den of vice and iniquity.”

On December 27, 1971 Supreme Court Justice Irving Saypol ordered the owners to end the use of the building as “a haven for criminals and as a source of harassment to the people of the neighborhood.” The State of New York had cited the hotel as “an open and notorious public nuisance,” a “base of operations” for criminals and “a market and meeting place for drug pushers and drug addicts.”

NYPL Collection
In the meantime, other problems were appearing. Tenants called the City warning about cracks and bulges in the interior walls and façade. Various people wrote to the Department of Buildings. In February 1973 a Building Department inspector noted that a wall “was bulging about a foot” from the second to the sixth floor. He posted a violation. Nothing was done.

Then on Friday, August 3, at 2:30 in the afternoon Gene Frankel heard the walls groaning. At 5:10 plaster started falling from the ceiling. Minutes later the Broadway Central Hotel crashed to Broadway in a cloud of brick, marble and plaster dust.

Amazingly of the 350 residents, only four died. Elias Higgins’ palatial hotel which The New York Times had once called “one of the largest and most magnificent hotels on the Western Continent” was gone. Months of finger-pointing and law suits ensued. The needless loss of one of New York’s great architectural treasures to neglect and greed resulted in heightened public awareness of the plight of threatened historic properties.
Posted by Tom Miller at 2:53 AM