When the Walls Came Tumblin' Down at Chumley's Bar 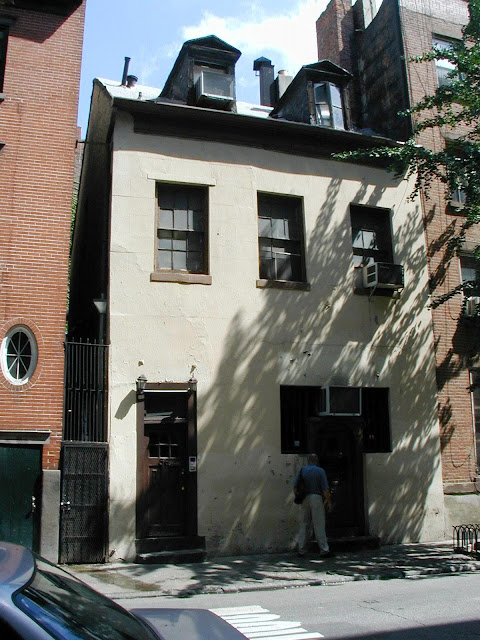 The little brick two and a half story Federal house at 86 Bedford Street in Greenwich Village stood for a century without attracting much attention. Built between 1820 and 1830, it exhibited the expected architecture of a working class house of the period: a slim, unadorned doorway without a stoop, three bays of six-over-six windows with plain stone lintels and sills and two pedimented dormers piercing the pitched roof.

A narrow horse walk separated No. 86 from its neighbor to the north and provided access to the rear. At some point the house was extended to the back and a side entrance on the first floor was added.  It opened onto a common garden or courtyard surrounded by Nos. 56 and 58 Barrow Street and 82 Bedford Street, with a narrow entry onto Barrow.

In 1905 the little house was still a private residence. Police Captain John J. Murtha of the Eldridge Street Police Station was living there with his wife, two children and a cook.

In 1920 Prohibition was enacted. Leland Chumley, an activist and member of the International Workers of the World, purchased the property in 1922 (various resources cite the year as 1926 and 1928; the more important point being simply that he bought it) and opened a speakeasy and gambling parlor – complete with hidden passageways and peepholes at the doors. The exit to the Barrow Street courtyard – by now called Pamela Court – was disguised as a bookcase with artificial books.
Prohibition was repealed in 1933, but Lee Chumley retained the Prohibition-era atmosphere of the bar. No exterior signs were ever posted. Chumley’s was one of those arcane places the patrons had to know about in order to find.
Early on it became a favorite with the literary set. F. Scott and Zelda Fitzgerald had a favorite table. Before long Ernest Hemingway and Eugene O’Neill could be found drinking here. Lee Chumley started a tradition – if a writer paid a second visit, he could be called a regular and Chumley would request a dust jacket from a book to be displayed on the wall. As the years progressed, jackets from authors and poets like Norman Mailer, John Steinbeck, Edna St. Vincent Millay (who lived just down the street), Theodore Dreiser, William Faulker and scores of other notable American writers lined the walls.
In 1988 Douglas Martin of The New York Times wrote “It is to these rustic precincts, decorated with more than 125 jackets of books written by Chumley’s patrons (at least two visits required), that people still come to drink, think and put tentative pencil to paper — if only to balance checkbooks.”
Simone de Beauvoir visited Chumley’s several times, although she could never get the spelling correct. In her America Day by Day, published in 1948, “In Bedford Street is the only place in New York where you can read and work through the day, and talk through the night, without arousing curiosity or criticism: Chamley's. There is no music so that conversation is possible. The room is square, absolutely simple, with little tables set against the walls which are decorated with old book jackets. It has that thing rare in America: An atmosphere! “ 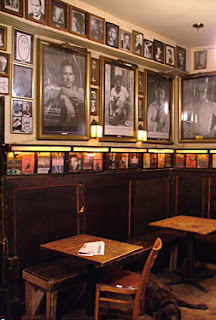 Leland Chumley who The New York Times said had been “a laborer, stage-coach driver, artist, waiter, newspaper cartoonist and editorial writer,” died in 1935 from a heart attack. His wife Henrietta continued management of the bar until 1960.
Unfortunately, no serious maintenance on the structure was ever done.  In 2007, Steve Shlopak and his partners ran Chumley’s when workers hired to replace the façade were doing unauthorized interior work on the bar. Just before 2 pm on April 5 a brick chimney separated from an interior wall and crashed into the bar area, leaving a 6 by 10 foot hole in the wall.
A shoring company was immediately brought in to stabilize the structure, after which the bar, the book jackets, the artificial bookcase door – all the elements that Simone de Beauvoir attributed as “atmosphere” were removed and put into storage.

With every attempt to restore the landmarked structure, another set-back arose. Little by little nothing remained of the Federal building except two walls. The roof was gone, the floors were gone and behind the plywood construction barricade was a gaping hole in the ground.

Three years later, in 2010, a facsimile composed of concrete blocks is rising from the rubble. Framed-out Federal-style dormers have appeared where the roof will be and at some point the bar and the book jackets and barstools will be reinstalled and Chumley’s will open again. 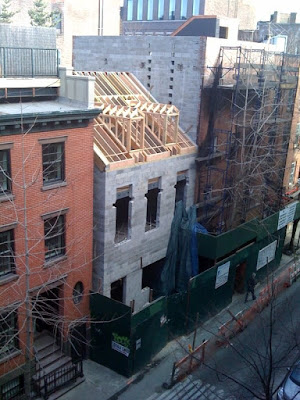 Photo by Jeremiah Moss
While bringing back the fixtures is not a problem, a writer for The New York Times wonders how long it will take for the stale beer smell to return. The main question, however, is simply whether a reconstruction is in any way a restoration. When the newly-built, Disney World-like replica of the 1830s building is complete, is it still a landmark or just a new building?

Despite the commendable efforts to clone the old Chumley’s building, the historic property -- a Village mainstay and literary footnote -- has been lost forever.
Posted by Tom Miller at 2:54 AM