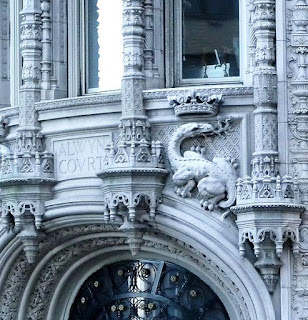 By 1900 in New York the stigma of apartment living for the upper classes was diminishing.  Apartments had long been viewed with derision, especially after Mrs. Caroline Astor referred to apartment life as “living on a shelf;” but they became more fashionable as builders erected luxurious, commodius apartment buildings.


In the neighborhood around Carnegie Hall lavish apartment buildings cropped up. And in 1907 developers Alwyn Ball Jr. and Walter Russell purchased land at the southeast corner of 7th avenue and 58th Street with the intention of erecting a palatial apartment.

The men commissioned architects Harde & Short for their 12-story building which would be called the Alwyn Court. Instructed to create house-like apartments that would attract New York’s elite, they designed a square building with a curved corner and a central courtyard.  When the high-living Russell fell into bankruptcy the following year, Ball continued on with the project.

The building opened late in 1909. The lavish lifestyle offered by the Alwyn Court was not missed by the 1910 The World’s New York Apartment House Album.  It praised the convenience to Central Park, transportation and the shopping and theatre districts and added that “There are only two apartments on each floor, consisting of fourteen rooms (eleven of which are outside) and five baths.  In order to permit of entertaining on a large scale the reception and sitting rooms are arranged so that they can be thrown into one.  The decorations and finish, while elaborate, are in perfect taste and harmony.”

The Album continued “The house is equipped with a vacuum cleaning system, three Otis elevators, with continuous service day and night, and each apartment has an individual wine vault, commodious dressing rooms with shelves of plate glass, parquet flooring throughout and large millinery closets with plate glass compartments.”  Millinery closets were a must-have for Edwardian women whose wardrobes included scores of large, plumed hats.

And while the Apartment House Album was correct in that most apartments had 14 rooms and five baths, the largest apartment boasted 32 rooms, renting at $22,000 a year.  Many of the first tenants had custom work done on their units. Jacob Wertheim, president of United Cigar Stores, had paneling from a French chateau installed.  Billiard rooms and music "conservatories" were included in certain apartments.

But with all the interior comforts, it was the façade of the Alwyn Court that was most spectacular.  Harde & Short lavished the exterior with a French Renaissance explosion of decoration. Inspired by the court of Francis I and using the king’s royal symbol, the fire-breathing crowned salamander, the architects covered every inch of façade with elaborate terra cotta embellishment.  Fabricated by the Atlantic Terracotta Company of Staten Island, cherubs, scrolls, vines and crests and the omnipresent salamanders slithering here and there, create a visual overdose of ornamentation. 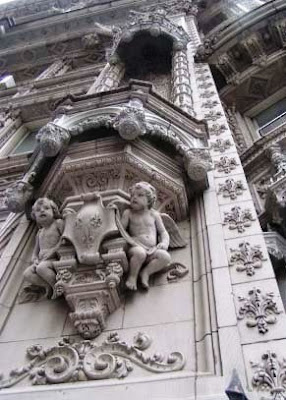 Terra cotta had become popular with certain architects at the turn of the century because of its versatility and comparative affordability, as Louis Sullivan demonstrated in his earlier Bayard Building.  Elements that were repeated (such as the salamanders, which, like gargoyles, were meant to protect) could be pressed in a single mold and although the pieces had to be hand-finished, there was a substantial cost savings.

The intricate decoration impelled the magazine Architecture to compare it to something “made by a pastry cook.”

On May 14, 1911 The New York Times commented on the use of terra cotta in the Alwyn. “The entire façade of the building, from sidewalk to cornice, is covered with Renaissance ornament of the Francois Premier Period. The color is gray. It is said that the cost of the Alwyn Court in any other high grade material would have been three times its cost in architectural terra cotta.”

With marketing targeting the wealthy, the Alwyn Court was touted as “City Homes for Those with Country Houses” and “A House of Select Residences.”  It was also promoted as a fireproof dwelling place. Residents could rest comfortably knowing that the brick façade with terra cotta facing and the concrete floors were not combustible. 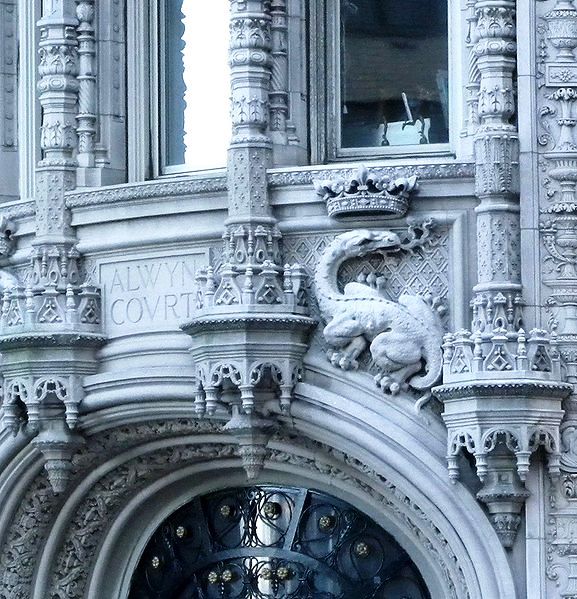 Unfortunately the wooden parquet floors, the carved paneling and painted beams were not so fireproof.

In March 1910 a fire started in an unfinished apartment on the ninth floor. Unnoticed for nearly an hour it spread upwards, the flames becoming so hot as to melt half-inch plate glass doors “forming a ball” and crumbling the marble mantles. According to The New York Times “…experts said that the heat generated in the apartment must have reached 2,200 degrees centigrade before it burst the windows overlooking Seventh Avenue…From the dining room the flames evidently spread through the other rooms in the apartment and up the wide staircase to the bedrooms, which were on the tenth floor…The fire was burning, it was estimated, fully fifty minutes before it was discovered.”

On the floor above, Mrs. Braker had left a window opened.  The fire licked up the side of the building and caught the draperies at her window and rapidly swept through her apartment.  Fortunately only a handful of apartments were damaged.  Investigators praised the fireproof construction elements as saving the building and keeping the fire from spreading.  The Times cited a representative of the Hedden Construction Company who said “If people insisted on having wooden decorations in their apartment…no amount of labor or expense could make them fireproof.”

The damage was quickly repaired and within a year the Alwyn Court was at full occupancy.  The glory days of the Alwyn Court, however, would come to an end within 25 years.

As the 1920s turned into the 1930s Seventh Avenue became increasingly commercial.  Wealthy New Yorkers who were riding out the Great Depression found fashionable new apartment buildings on Central Park West and Fifth Avenue – on either side of the Park.  By 1937 the Alwyn Court sat empty. 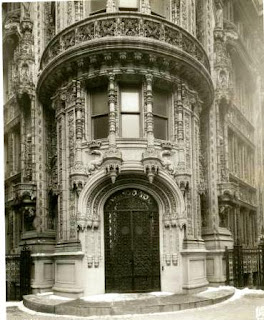 Foreclosing on the Alwyn in 1938, the Dry Dock Savings Institution hired architect Louis S. Weeks to reconfigure it into apartments more sensible for the area.  Except for removing the substantial cornice and balustrade, he essentially left the remarkable terra cotta façade intact.  Where there had originally be 24 apartments there were now 75.  Weeks compassionately salvaged most of the larger rooms.

The Alwyn Court came back to life.  Shortly after the conversion it was fully rented again.

In 1980 the architectural firm of Beyer Blinder Belle directed a half-million dollar façade restoration as part of a co-op conversion. The intricate terra cotta was cleaned and damaged sections were replaced with concrete copies. The interior courtyard was glassed-over to create an atrium. Richard Haas painted trompe l’oeil “carved stone” on the full length of the courtyard walls. 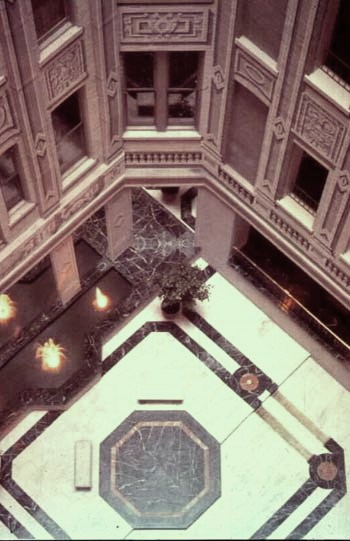 Again in 1997 the terra cotta was in danger, one chuck falling to the sidewalk. The owners NRK Management brought in consulting engineers to supervise repairs and structural stabilization. 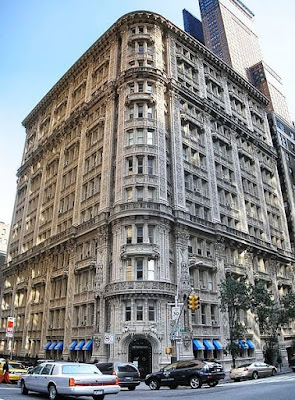 Today Seventh Avenue is becoming residential again and the Alwyn Court is vibrant and as beautiful as ever; a rare reminder of a time when over-exuberance in architecture was not a bad thing.
Posted by Tom Miller at 7:48 AM