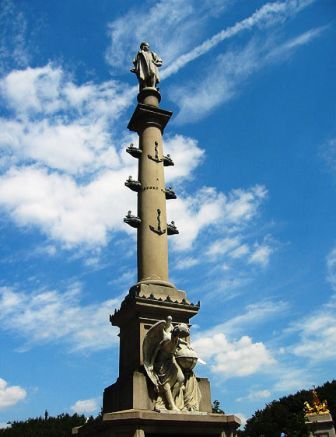 Since 1892 the marble statue of Christopher Columbus has stood atop its 70-foot granite column, stately staring downtown. For over a century of that period Columbus stood isolated while the maddening, honking traffic swirled at his feet.


On the southwestern corner of Central Park was a “Grand Circle” fronting the Eighth Avenue entrance. Like the circular traffic rotary around the Arc de Triomphe de l’Etoile in Paris, it was intended to create a wide, open vista as visitors approached the park.

As the 400th anniversary of Christopher Columbus’ first voyage to the Americas neared, the Italian-American newspaper Il Progresso initiated a fund raising campaign for a monument to be erected in the center of the circle. Dedicated in the Fall of 1892, it was created by Italian sculptor Gaetano Russo. Bronze rostra, or “ships’ beaks,” decorate the column, representing the Nina, Pinta and Santa Maria – echoing the rostra of captured ships that decorated the Roman Forum. Near the base, a marble angel contemplates a globe.


Not always viewed with the highest esteem, New York’s Italians relished their moment of pride. The New York Times, on September 17, 1892, reported on the laying of the cornerstone of the monument, which included a procession from Little Italy up Fifth Avenue.

“It was something unusual for the avenue and the regular promenaders were to be seen gazing at the spectacle from the chamber windows while Italian peripatetic vendors thronged the sidewalks, and Italian mothers in rainbow attire dandled their children in their arms on the steps of millionaires’ palaces. The column of men in uniforms seldom seen above Bleecker Street marched up between the rows of brownstone houses to the lively music of the Italian national air. It was Italy’s day…”


When the monument was completed the traffic circle encroached to within feet of its base. Its site at the convergence of 8th Avenue, Broadway, Central Park West and Central Park South is one of the busiest in Manhattan – a far cry from the carriages and horse-drawn trolleys Vaux and Olmsted anticipated. Throughout most of the 20th Century any pedestrian attempting to approach the monument was taking his life in his hands. The architecture critic Paul Goldberger once said that Columbus Circle was "a chaotic jumble of streets that can be crossed in about 50 different ways - all of them wrong."

That all changed in 2005 when a two-year make-over was completed providing a park-like oasis around the Columbus Monument. Striking fountains designed by WET, known for their Las Vegas “Fountains of Bellagio,” encircle the monument. The fountains are designed not only for visual but auditory appeal – the sounds of the water morphing from “a swollen river, a rushing brook, a driving rain or a gentle shower,” according to The New York Times. Wooden benches and landscaping complete the design by Philadelphia firm of Olin Partnership. The remake, which cost a staggering $20 million, earned them the American Society of Landscape Architects’ General Design Award of Honor the following year. 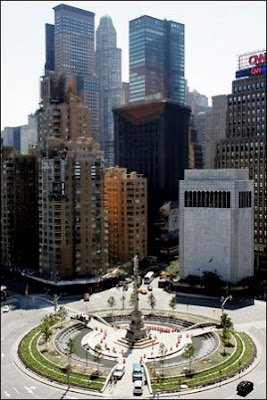 The Columbus Monument is the point from which all distances from New York City are measured.  Today Christopher Columbus no longer stands alone in traffic and New Yorkers have gained a welcomed refuge from the stress of the city.