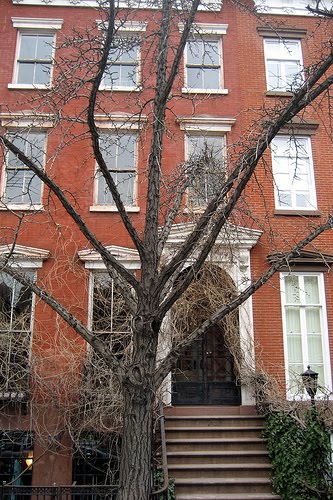 St. Luke’s Place is an anomaly among Manhattan streets, even in quirky Greenwich Village. One-block long, it gently curves from 7th Avenue, where it is named Leroy Street, to Hudson Street, where somewhere along the way it has mysteriously become St. Luke’s Place. 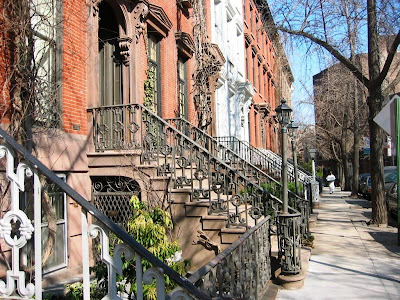 Beginning in 1851, 15 contiguous, grand homes were erected here. Completed in 1854, they are nearly identical. The unusually wide Italianate, or Renaissance Revival, brick-and-brownstone homes with opulent parlors, ornate plaster ceiling medallions and surrounds, and costly materials such as Italian marble and Honduras mahogany were designed for the well-to-do upper-middle class. Many boasted “triple-parlors,” with three rooms per floor.
The site chosen for these handsome residences was strange – directly across from the Old St. John’s Burying Ground, affording the high-toned residents a macabre parlor view of tombstones. Because the cemetery would preclude the building of homes across St. Luke’s Place, the houses were numbered sequentially in yet another departure from the norm. 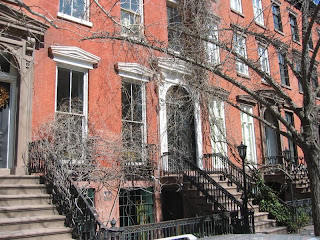 Here, at No. 6, little Jimmy Walker grew up. After attending the nearby Catholic Xavier High School, James John Walker worked as a songwriter on Tin Pan Alley, penning such then-favorites as “Will you love me in December (as You Do in May)?” and “There’s Music in the Rustle of a Skirt.” The sentiment of the latter lyrics would prove to be more in keeping with his personality than the former.

Walker entered politics, his father being well-connected with the governor of New York, Al Smith. He became a State Assemblyman in 1910 and then a Senator in 1914. Smith took a shine to Walker, who impressed everyone with the dashing appearance that earned him the nickname “Beau James.”


In his The Power Broker, author Robert Caro describes Walker as wearing a "Pinch-waisted, one-button suit, slenderest of cravats, a shirt from a collection of hundreds, pearl-gray spats buttoned around silk-hosed ankles, toes of the toothpick shoes peeking out from the spats polished to a gleam. Pixie smile, the 'vivacity of a song and dance man,' a charm that made him arrive in the Senate Chamber like a glad breeze' The Prince Charming of Politics.....slicing through the ponderous arguments of the ponderous men who sat around him with a wit that flashed like a rapier.”
Although Jimmy Walker had earned himself the reputation of a philander and a boozer, Smith encouraged Walker to run for Mayor in 1925 – admonishing him to change his ways. Walker agreed. Except he didn’t change his ways.


Walker won the election and immediately decided his home on St. Luke’s Place, now the mayoral residence, needed a $25,000 make-over. In November 1925 he moved into the Hotel Commodore with his wife while workmen soundproofed his conference room with simulated-wood cement walls and made other revisions. Two lampposts were installed at street level which the New York Times noted were customary since Dutch times.
Six months later the renovation was complete. The mayor’s wife and mother-in-law had a special celebratory dinner prepared. The mayor failed to show up. When he attempted to call home he had forgotten the new, unlisted number and no operator would reveal it.

Finally at 3:00 am, Jimmy Walker stumbled home. The police officer stationed at the front door, not recognizing him and unable to believe that this “disreputable looking man” was indeed the mayor, refused to allow him in.

The following day Walker said to his wife “How the hell does a mayor get into his own home?”

“You are very well protected,” she answered.

Among Walker’s neighbors on St. Luke’s Place at the time were Theodore Dreiser, Sherwood Anderson and Marianne Moore. As the Jazz Age roared on in New York City, Jimmy Walker roared with it. He admired chorus girls, perhaps a little too much, haunted speak-easys, and never left his bedroom at No. 6 St. Luke’s Place before noon. Here he would look at the photographs in magazines and newspapers for hours (he disliked reading the articles), before descending the stairs for breakfast.

Rather than store his many hats, he hung them in the entrance hall, advising his butler to gesture to them and explain that the mayor was involved in a meeting should any boring visitors arrive.

Things turned sour for the mayor when the Great Depression hit. None too fond of showing up at City Hall, he was definitely not fond of the crick the Depression was causing in his fun. As the Depression worsened, Walker shocked the public when he callously advised them to look on the bright side by attending cheery movies.

New York Cardinal Hayes denounced the mayor’s philandering and drinking and Governor Franklin D. Roosevelt launched an investigation of corruption in Walker’s administration. It did not take long to find it.

Facing pressure from Roosevelt, Walker resigned office on September 1, 1932 and fled to Europe with his girlfriend, Zeigfeld showgirl Betty Compton, before charges could be filed. There he married her after obtaining a divorce from his wife. The pair was divorced six years later.

In the meantime, No. 6 St. Luke’s Place sat empty. In 1934 it was seized and sold for nonpayment of taxes to Eric Coupey, an importer and broker in essential oils.

Throughout the 20th Century and into the 21st, little has changed in the outward appearance of the fifteen St. Luke’s Place homes. At No. 6, the pedimented windows, the arched doorway with its heavy, scrolled brackets and even the mayoral lamps survive.

In 1995 No. 12 St. Luke’s Place sold for $2 million, only to be sold five years later for $12.995 million. In 2007 Nat Rothschild gutted No. 8 and commissioned David Chipperfield to design entirely new interiors. The block where Anderson, Dreiser and Moore lived now boasts residents with names like Linda Ellerbee and Robert DeNiro.

The cemetery across the street is now a playground named for the boozing, philandering and ever-sensational James J. Walker.
Posted by Tom Miller at 2:58 AM