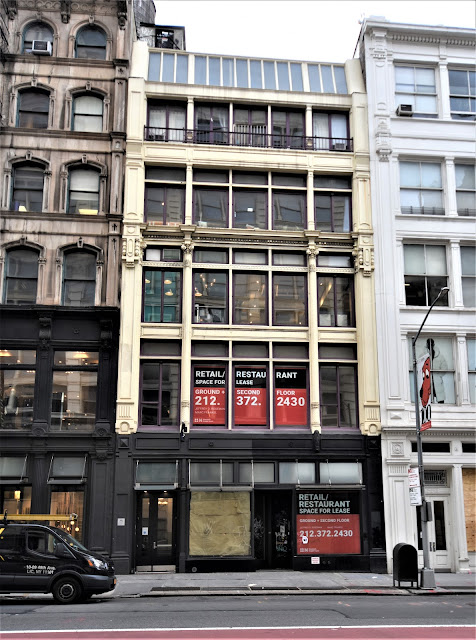 In 1832 Charles L. Tiffany and John B. Young established their "stationery and fancy goods store" at No. 259 Park Row.  On April 14, 1841 the firm announced that J. Lewis Ellis had joined the firm, the name of which became Tiffany, Young & Ellis.  When the firm moved to its new location at No. 271 Broadway at the corner of Chambers Street on July 1, 1847, an announcement noted "To their former business they will add Jewelry, and invite particular attention to their large selection, both Foreign and American, of the newest, richest and most elegant descriptions."
In 1853 the firm dissolved and Charles Tiffany struck out on his own.  He hired the architectural firm of R.G. & O. P. Hatfield to design his new store at Nos. 550 Broadway, midway between Spring and Prince Streets.  Prominent during their careers, brothers Oliver Perry Hatfield and Robert Griffith Hatfield had opened their office around 1841.  Decades later, in 1891, The Inland Architect commented, "At that time, architecture was much less of a fine art than it is now, and the Hatfields found themselves led by inclination to the scientific and practical side of the profession, in which they soon gained a wide reputation."
The Hatfields produced a five-story Italianate style retail palace befitting the jewels and silverware inside.  The building was faced in white marble above the cast iron storefront made by Daniel D. Badger's Architectural Iron Works.  Above the intricate cornice two stalking lions flanked a parapet topped with a elaborate cresting.

Reportedly Charles Tiffany feared that the second floor openings were "monotonous."  He commissioned his good friend Henry Frederick Metzler to carve a 9-foot tall figure of Atlas to be situated over the entrance, holding a clock, four feet in diameter, upon his shoulder.

Metzler was a carver of ships' figureheads, or “bow portraits.” Naked except for a cross leather strap, the bearded, lanky figure was a distinct departure from the hulking, muscular Atlases produced by most contemporary artists.  The carver did not attempt to present a heroic figure and instead created a realistic, natural human form.  Carved of fir, when completed the figure was painted to mimic the patina of weathered bronze.

Newspapers described the new store as a "brilliant bijouterie" and described a "blaze of glittering temptations."  The first floor was reserved for jewelry and silverware.  Arched mirrors below the 16-foot ceiling alternated with frescoed panels.  On the second floor shoppers wandered among an "infinite variety of exquisite work," including chandeliers, bronzes and clocks, and one floor above could be found porcelain, china and glass.  Jewelry makers worked on the uppermost floors.

Charles Tiffany owed much of his success and reputation to silver maker Edward C. Moore, who had taken over the reins of the silver making firm John Moore & Co. following his father's retirement in 1851.  He entered an exclusive agreement with Tiffany and the firm now produced only for Tiffany & Co.  The Illustrated American would later say that Moore “was easily the foremost silversmith in the United States.  It is largely due to his skill and industry that American silverware has reached a degree of perfection that makes it celebrated all over the world.”
Tiffany & Co. became known for its exquisite sterling silver presentation pieces, like the first place prize for the Grand Regatta at Newport in 1854.  The New-York Daily Tribune reported "The prize punch-bowl, manufactured by Messrs. Tiffany & Co. of Broadway, is one of the most elegant pieces of silverware we ever saw.  The design was made by Mr. Edward C. Moore, the designer of Messrs. Tiffany & Co."  The article described the ornate, two-foot high object:

The bowl is surmounted with a knotted cable forming a bold and massive border; the handles also are of cable, running out of hawser-holes, twining around and supporting an anchor of solid silver.  The bowl stands on a foot or pedestal, the stem representing water-lilies and bulrushes, around which are Tritons springing forward out of the sea, blowing their horns--the whole resting on a base of shell-work.  The body of the bowl is highly ornamented with shields and appropriate nautical emblems and devices--anchors, buoys, blocks, pennants, &c.  Inclosed [sic] in the shield is a finely-engraved view of the race between the yachts Maria and America, before the latter sailed for England.

The expensive wares that glittered within the cases were tempting targets for slippery shoplifters.  On January 11, 1855 a well-dressed gentleman walked in, introduced himself as Alphonse Soulard, and explained, according to the New York Herald, "that he had just arrived from the South along with his sisters, who intended making some heavy purchases of jewelry."  He said they were resting, but would come by in the afternoon.  In the meantime, he asked to see some diamond breastpins.  While the clerk's attention was diverted, Soulard "pocketed two of the most valuable pins, one valued at $4,500, and the other valued at $1,500."  (The two items would be worth a staggering $183,000 today.)

Soulard said goodbye, promising to come back later with his sisters.  But he then reconsidered and asked to see some diamond rings and seals.  He might have made a clean getaway with the breastpins, but now he drew the suspicion of another clerk, John F. Simons, who watched him from a distance.  When his co-worker's back was turned, Soulard dropped a seal into his pocket.
When Soulard left, Simons asked the clerk if he were missing a seal.  When he saw that one was gone, he checked the breastpin case and discovered that theft as well.  Soulard was long gone, but a good description was supplied and handbills were distributed around the city offering a $500 reward.
A jeweler saw one of the handbills and reported to police that he had purchased a breastpin for $500.  The seller promised to return with more goods.  A representative from Tiffany & Co. identified the piece and a trap was set.  When Soulard (whose real name was Henry J. Wendle) returned he was caught.  The New York Herald said "The prisoner wore the $1,500 breastpin in his shirt bosom when arrested."  He was the captain of a sailing vessel which recently arrived from San Francisco.  The article noted "it was but a night or two ago that he cut quite a figure at a ball with the magnificent diamond breastpin stolen from Messrs. Tiffany & Co."
Tiffany & Co. joined the upward migration of the shopping district in 1870 by erecting a new building facing Union Square.  The Atlas clock was removed and installed at the new location.
The Broadway building was purchased by J. Simpson who announced that the "first-class store" was "to be put in thorough repair."

The renovated building became home to the Meriden Britannia Company, makers of electro-plated silverware.  The firm's ornate Victorian tea services, flatware, and vases were available at a fraction of the prices of Tiffany & Co.'s sterling silver pieces.  It shared the building with Francis P. Freeman whose opening announcement listed "French clocks, artistic bronzes, fine fans, opera-glasses, Russia traveling-bags, dressing-cases, shell, jet and French jewelry, musical-boxes, &c., &c."
As Tiffany & Co. had done, Meriden Brittania Co. moved to Union Square in January 1878.  William Waldorf Astor purchased the building in June 1884 and two years later again remodeled it.  That year an advertisement in The New York Times for the ground floor store touted the "extra wide modern building."
As the high-end retail stores continued to abandon the area, No. 550 became home to less elegant tenants.  In 1891 the Manhattan Cloak Company's factory was in the building, for instance.  With the outbreak of the Spanish-American War, the Red Cross took space for its Committee on Supplies.  On July 14 The New York Times reported "The committee decided to ship to-day one dozen cases of groceries and two cases of clothing to the Twelfth Regiment camp at Chickamauga.  They decided also to send 100 cases of food and clothing to the various camps within the next few days."
William W. Astor sold the property in 1901.  The transaction signaled the end of the line for R. G. & O. P. Hatfield's early Victorian design.  The outdated marble façade was stripped off and replaced by modern cast iron which allowed for vast expanses of glass what poured natural light into the factory spaces. 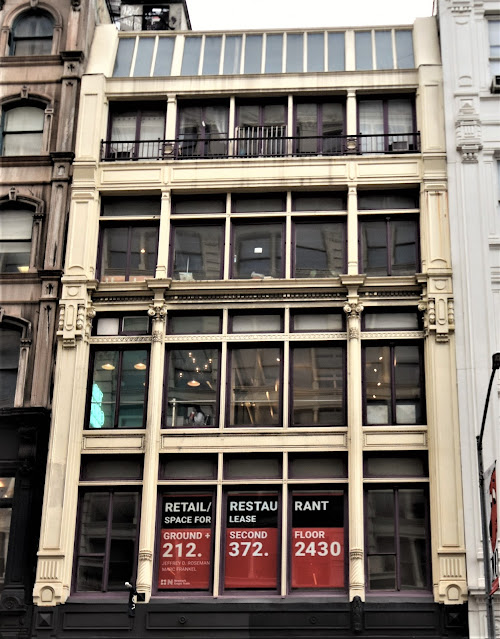 The building continued to house small manufacturers like the I. S. Knee Pant Co. and the Castle Braid Company.  Beginning in the Great Depression years The Dandy Dry Goods Company, "wholesale distributor of general merchandise," was here and would remain into the 1970's.
Change was happening along this stretch of Broadway by then.  As early as 1971 dancer and choreographer Daniel Nagrin's dance space, The Workshop (later the Studio Theater), was in the building. 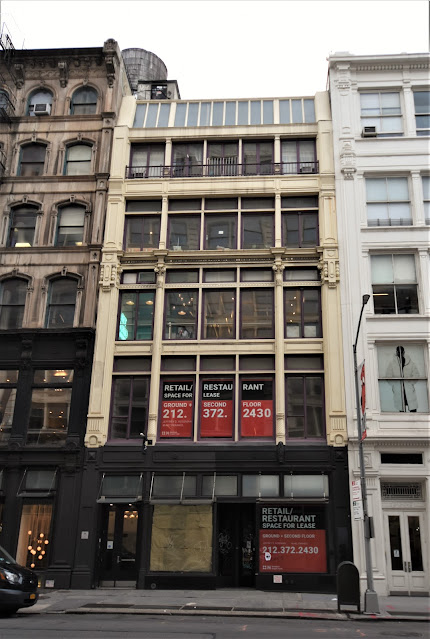 A renovation completed in 2012 resulted in one commercial space per floor.  Very few people working or shopping in the building would guess that 165 years ago wealthy socialites browsed among glistening silver and dazzling jewels in the same space.
photographs by the author
Posted by Tom Miller at 1:06 AM