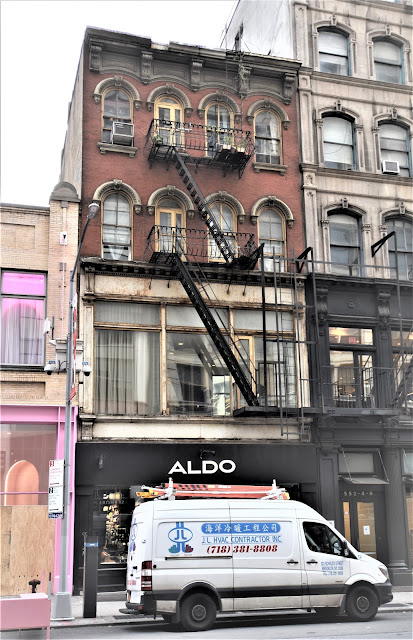 The upward expansion of New York City was rapid during the first half of the 19th century.  In the 1830's the Broadway neighborhood around Prince and Spring Streets was an exclusive residential area.  But by the mid 1850's the wealthy homeowners were moving on, their handsome homes either converted or demolished for businesses.  In 1854 the house formerly occupied by Dr. Joseph T. Murphey was demolished and construction of a modern commercial building begun.

Documents regarding the owner and the architect have been lost, however the four-story building, completed in 1855, was striking.  Faced in red brick and trimmed in stone, its Italianate style building featured fully-arched openings upon molded sills, attractive eyebrows with foliate corbels, and a bracketed cornice with a scalloped frieze that followed the rhythm of the arches below. 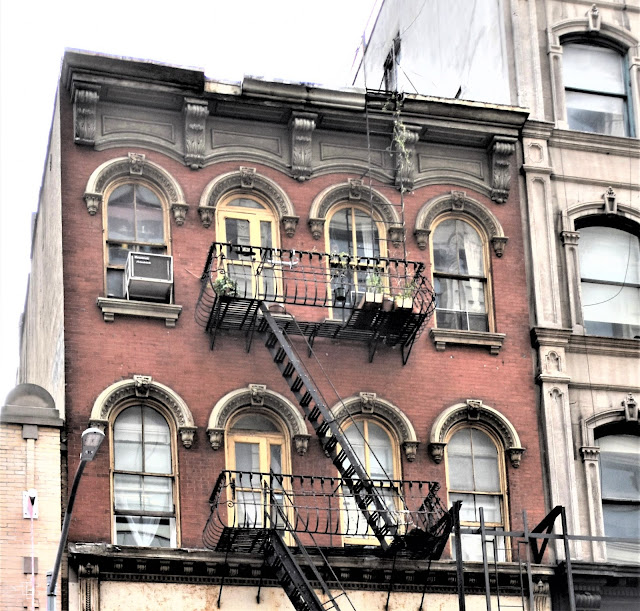 The original tenant of the ground floor shop was Gershom Lockwood, a tailor.  Upstairs was J. F. Luhme & Company, makers of scientific apparatus.  It was run by Hugo Goebler and among its employees was William A. Rorke, who wore two professional hats--glassblower and chemist.
Based in Berlin, J. F. Luhme & Company was founded in 1825 and had branches in St. Petersburg and Vienna.  Goebler (who was the brother-in-law of W. I. Rohrbeck, a Berlin executive), he had come to New York the same year that construction began on the Broadway building.
In 1859 Gershom Lockwood moved his tailoring shop next door to No. 558.  His former space became the "eatinghouse" and beer saloon of Charles and Anna C. Wolf.  J. F. Luhme & Company now shared the upper floors with Crouch & Fitzgerald, dealers in trunks and bags, and Amedee Peyrot, who dealt in platina, an alloy of platinum and other metals.
Crouch & Fitzgerald's factory was in Brooklyn.  The advent of the Civil War meant additional business for firms like theirs.  On August 29, 1861 The New York Times reported that army officers had examined the firm's "new and ingenious trunk" called the Hardie's Combination Army and Excursion Trunk.
The remarkable invention, when closed, appeared to be a normal trunk, 30 inches long, 21 inches wide and 20 inches high.  Opened in one configuration it made a large table capable of seating four men.  Or, "by throwing it open, it affords a cushioned settee" and by "raising one half of it, at an angle of 45°, with a brace to hold it in position, it forms a high-backed easy chair."  It could also convert to a six-foot long bed, with mosquito netting or a "nice writing-desk."  The article said that "several were ordered on the spot."
In 1862 the restaurant space once again became home to a tailor shop, this one run by John W. McKinley.  As many merchant tailors did, he gave work to journeymen who worked from home.  In November 1862 Henry Klumpp applied for work, giving a false name and address.  He was given fabric to make six coats and was to return with the finished goods the following Friday.  Instead he went directly to the pawnshop of Hamilton & De Long on East Broadway.  The goods were discovered there and Klumpp was tracked down, arrested and found guilty of grand larceny.
McKinley not only created his own goods, but imported high-end menswear.  On May 7, 1870, for instance, he advertised in the New York Daily Herald announcing "English Coatings--New Styles Just Received by McKinley, Merchant Tailor, 556 Broadway."
By then J. F. Luhme & Company had been gone from the building for five years.  In place of scientific instruments now were hats and apparel.  Clapp & Braden, millinery goods, was here in 1867, joined by women's clothing importer Clarence F. Moulton by 1870.
Moulton used an innovative marketing tool on January 25, 1871--live models, a forerunner of the fashion show to come.  His punny advertisement read "Dew Drop Inn at 556 Broadway, and behold the finest looking ladies, dressed in gorgeous costumes; from 6 till 12 P.M. Admission free."
As other tenants came and went--S. Goldsmith & Co., straw hat makers were here in 1873, and milliner Phoebe Black and artificial flower dealer Davis & Stein here here in 1876, for instance--Crouch & Fitzgerald remained.  On Christmas Eve 1874 the firm targeted last-minute shoppers, saying they "are offering a large Christmas stock of fine leather goods, including satchels, pocket-books, cigar-cases, &c."
Andrew Fitzgerald lived in Brooklyn where he was a leading politician.  Among his closest friends was Rev. Henry Ward Beecher.  In 1878 Fitzgerald began experiencing liver trouble.  The New York Daily Herald reported "Dr. Chapman, deemed his case one of great stubbornness" and "determined to salivate him, and did so, with very serious consequences."  "Salivating" was a process intended to relieve constipation.  Unfortunately, it involved giving the patient a mercury-based enema.
"In a short time Mr. Fitzgerald was unable to swallow anything whatever, and said he would rather die than endure the torture of a renewed attempt."  And so the doctor turned to "enemas of condensed food."  Eventually Fitzgerald ordered the physician out "and vowed he would never have another [enema]."  The family sought the counsel of Rev. Beecher, who referred them to his family doctor, named Searle.
Searle attempted a dangerous and new procedure--a blood transfusion.  He found a "stout, hardy, rugged man" as a volunteer.  "The healthy man's arm was tapped and his red, rich blood flowed freely into a funnel held to receive it."  Fitzgerald's vein was opened and five ounces of blood was pumped in by a syringe.  The newspaper touted "The experiment was entirely successful and the instrument worked to a charm."  Unfortunately for Fitzgerald, he died shortly afterward.

In December 1889 the owners had a two-story cast iron storefront installed at No. 556 Broadway.  The material allowed for vast expanses of glass which washed the interiors with natural light.  The modern addition clashed architecturally with the more delicate original design above.  The estate of William Backhouse Astor, Jr. purchased the building in 1897 and the following year joined it internally with Nos. 552-554.
Among the tenants was Fishel, Nessler & Co., jewelry manufacturers.  Established in 1885 by Henry W. Fishel and his brother-in-law, S. C. Nessler.  The New York Times remarked that the firm "began the manufacture of jewelry on a large scale."  Nessler retired in 1898 and Henry's brother, Theodore H. Fishel, replaced him as partner.
The brothers embarked on an ambitious scheme of establishing a chain of jewelry stores across the country.  They quickly opened six stores in several cities.  "The idea was that the retail stores would dispose of the surplus stock from the factory."  It was a disastrous endeavor.  The New York Times said that "in a short time...the Fishels lost between $75,000 and $100,000."
The situation was kept a carefully guarded secret within the industry.  Then, on Tuesday, November 1, 1910, with a receiver about to be appointed by the court, Henry W. Fishel disappeared.  The New York Times said "The disappearance of Mr. Fishel became noised about the jewelry trade on Wednesday, but no one outside of his immediate family knew that business worry had led the manufacturer to leave home."
On Thursday Theodore Fishel received a letter from his brother, saying that he was at the Hotel Grand in Jersey City and asking him to come at once.  When he got there, a clerk's passkey was needed to enter the room.  "Lying on the bed was Mr. Fishel.  He was very weak, and could scarcely speak above a whisper."  The despondent 47-year old had swallowed Paris green, often used as rat poison.
Fishel was arrested for attempting suicide and, after his brother posted $500 bail, was taken home "in a dangerous condition."  He survived and the following year the firm was reorganized.
Vincent Astor made renovations to the storefront again in 1913.  Architect M. Joseph Harrison's remodeling seems to have been limited to the ground floor stores.
Following World War I the building saw men's apparel firms as tenants, like The Broadway Neckwear Co. and the Royal Shirt Co.
Goldman-Gershon Sales Co. operated its store from the ground floor during the Great Depression years.  In 1933 it paid $266.67 per month rent, or about $5,260 in today's money.  The store was the target of armed robbers on the night of January 23, 1944.  The Daily News reported "Two police, well-dressed gents entered the offices of the Goldman-Gershon Sales Co., 556 Broadway at Spring St. at 6:30 last night and asked to buy some of the firm's general merchandise.  Then they drew pistols and demanded money."  The criminals escaped with the equivalent of just under $10,000 cash in today's money. 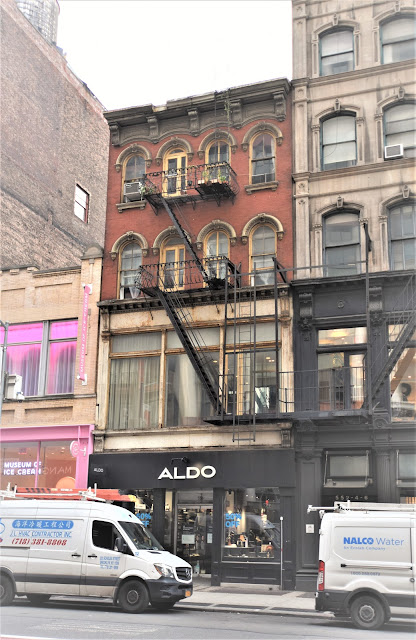 The Broadway neighborhood suffered decline for the next few decades, before experiencing a renaissance in the last quarter of the century.  Trendy shops, galleries and restaurants filled the neighborhood now known as Soho.  Today a branch store of the Canadian-based Aldo shoe and accessories chain operates from the much-altered storefront.
photographs by the author
Posted by Tom Miller at 1:19 AM