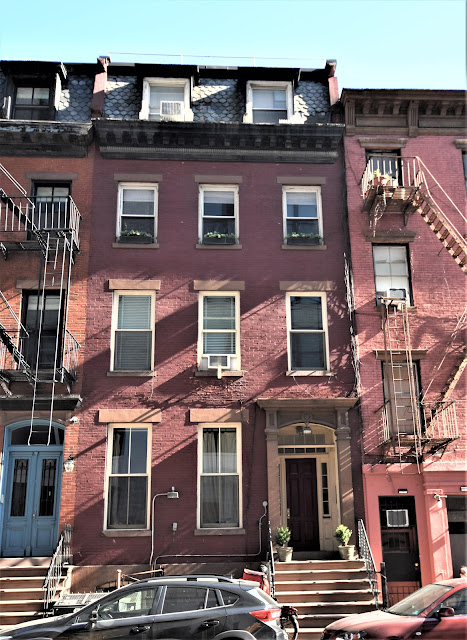 Matthew Kane's sash making business was highly successful by the mid-1860's.  His firm manufactured the wooden widow frames to be installed in new construction, and in the early years after the end of the Civil War there was no shortage of that in New York City.

He invested in real estate in 1868, completing a row of four upscale Second Empire style homes on West Fourth Street between West 13th and Horatio Streets.  Designed by the prolific team of brothers David and John Jardine, the homes were faced in warm orange brick and trimmed in brownstone.  Three bays wide, their most eye-catching feature was the fashionable slate-shingled mansard level, each holding two dormers.
Kane retained ownership of the row, leasing each of the houses except one.  He had lived nearby at No. 317 West 13th Street, but upon completion of the row moved his family into the southernmost house, No. 345.  Sharing the residence with him and his wife, Catherine, were their sons, William and Matthew, Jr., and daughters Isabella and Katherine (known as Kate).
By 1871 Matthew, Jr., had joined his father's firm.  Now named Matthew Kane & Son, it enjoyed large commissions like the contract to supply the window sashes for the proposed armory on Ninth Avenue and 23rd Street.  A resolution before the Board of Supervisors on June 29, 1873 agreed to pay Kane $25,023.18 for labor and materials, or about $550,000 today.
That year Kane was summoned for jury duty at the trial of William M. Tweed.  His was no small case.  The trial was to decide the fate of "Boss" Tweed of Tammany Hall.   Tweed was accused of 220 counts of corruption and fraud.  Given the large civic contracts Kane enjoyed, it is not surprising that he was eager to avoid having to sit on the jury.  He was dismissed after being questioned by the attorneys, The Evening Post explaining, he "was 'firm as a rock' in his opinion."
The West Fourth Street house was the scene of Catherine's funeral on March 6, 1877.  She had died three days earlier at the age of 61.
A much happier affair in the parlors took place on October 27, 1881 when Isabella W. Kane was married to George W. Horton.  The New York Times reported "The parlors of Mr. Kane's residence were lavishly decorated with tropical and domestic plants and flowers, and during the ceremony the bride and groom stood beneath a floral bell."  High society names like Shepherd, Gedney, Havemeyer, Voorhis and Starr were among the guests, as were John Jardine, who had designed the house, and his wife.  The reception supper was provided by society caterer Clark.
Two years later, on April 19, 1883, Katherine A. Kane married William R. Ward here.  Kate's husband was a partner with his mother, Emily, in E. M. & W. Ward, a men's furnishings store on Broadway which been founded by his deceased father many years earlier.
Despite the store's long established reputation, business began to slow.  Matthew Kane helped the couple out by loaning them a large amount of cash for the business.  But it was a losing battle.  On December 15, 1886 The New York Times reported "The business was been gradually rusting out, and was not, it is said, sufficient to afford a living to the three families who depended upon it."  Emily and William Ward made assignment of the store, essentially declaring bankruptcy.  At the time the business owed Matthew Kane $20,000--more than half a million in today's dollars.
In the meantime, Kane was lobbying the Board of Estimate to make improvements to Greenwich Village.  The Evening Post reported on December 28, 1885, Kane and a few others, "representing citizens on the west side of town, [were] asking for an appropriation of $200,000 for the purpose of erecting suitable buildings on the site selected for Gansevoort Market." 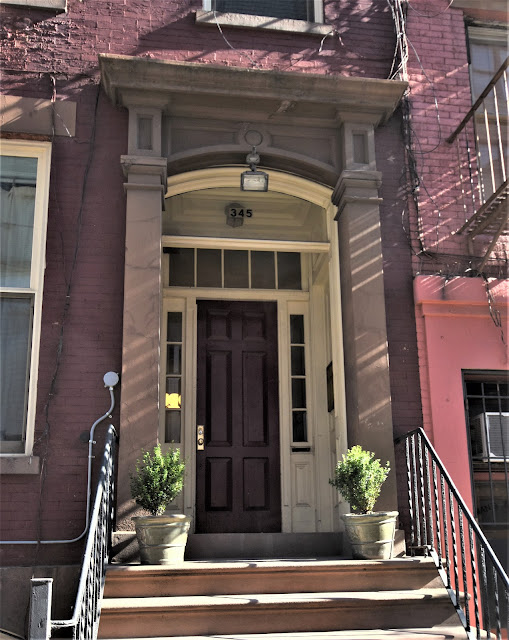 Matthew Kane died around 1898 and on May 4, 1899 his heirs sold the row of houses to Pincus Lowenfeld and William Prager.  No. 345, which had been home to the Kane family for more than three decades, became a boarding house.  White collar residents came and went for the next few decades.
In 1934, during the harsh Great Depression years, the house was converted to apartments, two per floor.  Among the initial residents were artists Raymond Baxter Dowden and his wife, the former Anne Ophelia Todd.  The year 1934 was an important one for Dowden.  Not only were he and Anne married, but he joined the faculty of the Cooper Union School of Art and Architecture.

Both would have successful careers.  Raymond Dowden's paintings and drawings would be exhibited at the Whitney Museum, the Chicago Art Institute and the Hunt Botanical Library.  Anne Ophelia Todd Dowden taught at the Pratt Institute and Manhattanville College and was a freelance illustrator for magazines like Life, House Beautiful, and Natural History.  She was renowned for her botanical works.
As mid-century approached, the tenants appear to have become increasingly blue collar.  Longshoreman Ardin Perrin lived here in 1949 at a time of labor unrest.  He filed assault charges against three seamen who were, according to the Daily News, "involved in recent factional disturbances in front of National Maritime Union headquarters at 346 W. 17th St."  Taking fellow rough-edged union members to court was probably not a good idea and Perrin had a change of heart.  On December 8 the Daily News reported that he "told Magistrate Morris Ploscowe that he had suffered no permanent injuries and wished to withdraw his charges."
By the dawn of the 21st century No. 345 had been converted to co-ops.  In 2006 comedian Louis C. K. (whose real name is Louis Székely) and his wife, artist Alix Baily, purchased an apartment in the building for $250,000.  It appears that they quietly laid plans to buy up the building.  Although they divorced in 2008, in 2013 they purchased a second, for $475,000, and in January 2016 a third, this time spending $564,900.
In the meantime, the brick of the facade has been painted barn red, the brownstone details shaved flat, and the 19th century ironwork replaced.  On the whole, nevertheless, the Kane house is relatively intact on the exterior. 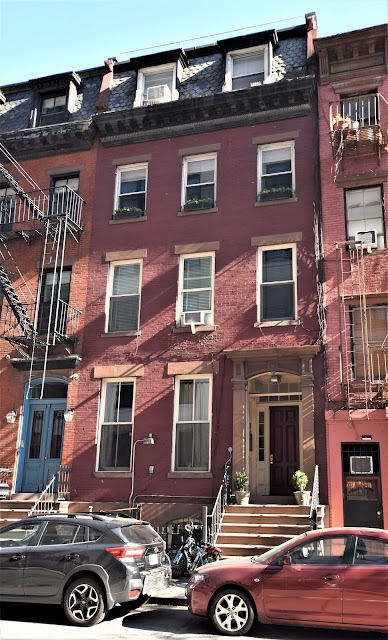