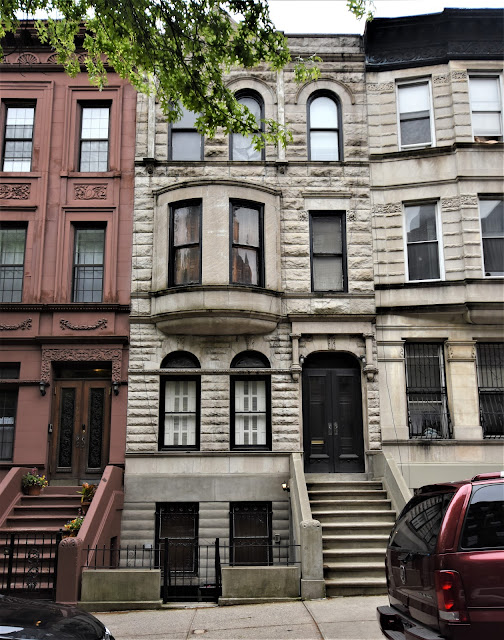 Players in the real estate field in the late 19th century included several powerful women who held their own with their male counterparts.  Among them was Susan Orcutt who focused much of her attention on the developing Sugar Hill area of Harlem.   On May 19, 1893 her architect, Christian Steinmetz filed plans for seven three-story stone-faced dwellings on 149th Street, between St. Nicholas and Convent Avenues.  Each would be 19 feet wide and cost $14,000--or around $403,000 today.

Steinmetz designed the row as a pleasing assortment of styles. He drew mainly from Romanesque and Renaissance Revival but took creative license.  Among them was No. 410, faced in rough cut limestone in keeping with its medieval-inspired Romanesque Revival design.  Three stories tall above an English basement, its entrance was embellished by two floating engaged columns which upheld a blank entablature.  A bowed bay at the second floor would have provided a cozy sitting nook inside.  Steinmetz forwent a cornice for a stone parapet with a peak.
Susan Orcutt apparently stretched herself too thin on the project, finance-wise.  Just after their completion she lost the entire row to foreclosure.  They were sold to Thomas Charlton, another real estate operator, in September 1894 for $16,000 each--only $2,000 more then they cost to build.
He advertised No. 410 in April the following year saying "$20,000 will buy the 19 foot, stone front three story basement and cellar decorated Dwelling, with extension, at 410 West 149th st; restricted neighborhood."  His mention of a "restricted" neighborhood was important--it meant that no businesses were allowed to encroach on the residential blocks.

There were no buyers, however, and Charlton leased the house until finally selling it in April 1903 to William Z. and Harriette E. Greene.  William was a partner in the real estate firm of Greene & Taylor with Louis R. Taylor.
The Greenes had no children, an important detail when Harriette was looking for a maid a few months later.  Her ad read "Wanted--a girl for general housework, two in family, private house."
The couple lived quietly in the house, drawing no press coverage for either scandal or social activities.  Harriette died in the house on June 4, 1910.  Interestingly her funeral was not held in the parlor, as was common, but in Our Lady of Lourdes church nearby on Convent Avenue.
In October William sold No. 410 to Josephine C. Wood.  She owned it only seven months, losing it to foreclosure in May 1911.  It was purchased by Julia Nusbaum at auction for $16,651, or about $462,000 today.  Like the Greenes, the Nusbaums drew no attention to themselves.  They lived here until 1920 when the house was sold to William Manning.
By now the neighborhood had greatly changed.  Subways were extended to the area in 1904 making it much more accessible.  A rash of apartment building construction followed.  Many of the private homes were being converted to rooming and boarding houses, and that was the fate of No. 410.
Two of the roomers in 1932 were from Pittsburgh.  On November 12 that year The New York Age reported that they had joined with a neighbor, Lewis E. Dial who lived on Edgecombe Avenue, to search for other former Pittsburgh residents.  "Purpose--to organize a New York Pittsburgh club," said the article.
A young couple moved from Ohio and took rooms here in 1933.  They went to the Harlem Furniture Co. on Eighth Avenue and paid $12 on furniture; but when it arrived they realized they had been duped.  The New York Age reported on March 4, 1933, "it was not what they had chosen, but, instead, some dilapidated pieces."  They took the store management to court where Magistrate Renaud asserted that the operation "was nothing but a racket by which several Negroes were robbed of their money by fraudulent furniture dealers."  He ordered the owner to give the couple their $12 on the spot.
Despite the victory, something continued to nag at Esther Miller.  Three months later, on June 10, The New York Age reported that the 31-year old had been rushed to Harlem Hospital after attempting suicide by swallowing bichloride of mercury.   There Dr. Payne deemed her condition serious.
Mason Stokes's name appeared in print in 1937 for a joyous and then a not-so-joyous reason.  On July 31 The New York Age reported that he had obtained his license to married Susie Taylor.  Two weeks later he was arrested for speeding on the Cross County Parkway in Queens.  The Herald Statesmen reported that he "was given the choice of $5 fine or a day in jail.  He took the jail sentence."
On January 12, 1944 Maude Miller came back to her apartment to find that the door had been forced open.  Her fur coat and radio were gone.  She seems to have been most concerned about the radio, which she valued at $250, or about $3,630 in today's money.  Police found the radio in a pawn shop on Amsterdam Avenue.  The shop owner identified 22-year old Francis Williams as the man who brought it in, and he was arrested.
Maude was most likely disappointed when the Nassau Daily Review-Star reported on February 5 that "A charge of grand larceny pending here against Francis Williams, 22, colored...was reduced to petty larceny by Magistrate Charles E. Ramsgate after a hearing in felony court today."
In 1957 Grace Wright and Gale Page shared an apartment here.  The couple got into a heated argument at 3:15 on the morning of April 21--so heated that a policeman was called to intercede.  The Daily News reported "All he was trying to do, Patrolman Terrance Rasamen explained, was to act as peacemaker in a brawl between Grace Wright, 25, and Gale Page, 29, at their home."  Suddenly the peacemaker became the enemy.  "But, he said, the woman belted him with her shoe, and Page punched him."  Both were arrested on charges of felonious assault.
A renovation completed in 1989 brought the house back to a single family home.
photograph by the author
Posted by Tom Miller at 1:04 AM