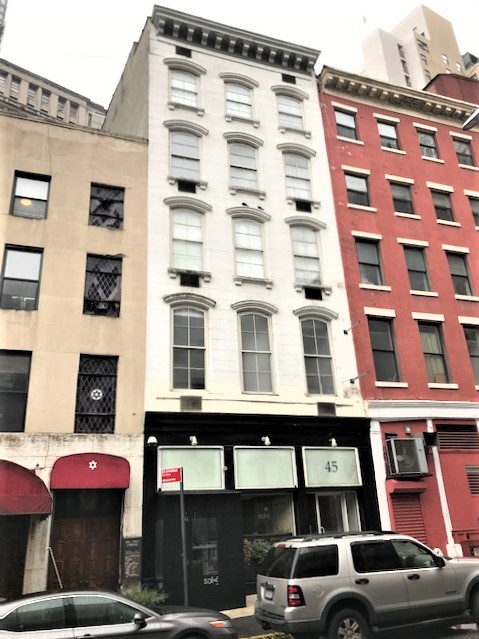 As early as 1831 the family of Benjamin Hallsted lived in the comfortable house at No. 45 Beekman Street, between William and Gold Street.  He listed his blind making shop at the same address, using the small building in the rear yard for that purpose.  By the mid-1840's he had moved his family to Sixth Avenue, and while he continued his business in the rear his former home was operated as a boarding house.
By 1853 Hallsted had taken his son, James C., into the business, renaming it Benjamin Hallsted & Sons.  He was leasing the main house to Jane E. Bromley, a widow.  A typical advertisement read:

Boarding--45 Beekman Street--A few single gentlemen or gentlemen and their wives can be accommodated with pleasant rooms and board, on very reasonable terms.  Also, transient boarders by the day or week.

Her boarders throughout the next few years tended to work nearby--like Patrick Daly, whose bookstore was at No. 82 Fulton Street and policeman Patrick McGrath who worked in City Hall.
That was all about to change.  In 1857 Hallsted demolished the two buildings on his property and erected a modern loft and store building.  The 23-foot wide structure was five stories tall and faced in white marble above the storefront.  Its Italianate style details, like the molded lintels over the segmentally arched openings, would have been equally at home on an up-to-date dwelling as on a commercial building.
Hallsted's main tenants were the Meriden Brittania Co. and its related Meriden Cutlery Co.  The firm had been founded five years earlier in Meriden, Connecticut where the factory was located.  Its glittering teapots, coffee services and flatware were made of polished Britannia metal, a pewter alloy that imitated fine silver.
A smaller tableware firm, H. H. Beadle Cutlery, was also an initial tenant, as was the stationery store of Henry Jeroliman, where his son Isaac L., had a position as clerk.
Another substantial tenant arrived in 1859.  L. T. Valentine & Co. was a dealer in paper goods.  Run by Louis T. and William J. Valentine, it dealt in "a large assortment of all kinds of paper," but specialized in paper bags.  An advertisement in 1863 offered:
To Grocers, Druggists, Bakers,
Tea and Coffee Dealers and Others,
Time Trouble and Money Saved,
by using the
PATENT MACHINE-MADE PAPER BAGS
Which entirely supersede the home-made article.
A large supply of the various sizes on hand.
The Meriden Britannia Company grew at an astounding rate and in 1870 left No. 45 Beekman Street.  An advertisement in the New York Herald on April 20 that year offered the store, basement and sub-cellar for rent "in fine marble building."
In 1873 the three tenants were Vannest Brothers, which dealt in saddlery and coach hardware (operated by Frank R. and Jacob J. Vannest); Robert Burnet's book store; and Edward Chamberlin & Co., printers and envelope makers.
The firms would have made use of a "hatch" to hoist goods up and down through the building.  In the years before freight elevators were common a shaftway equipped with pulleys and ropes solved the problem.  But the open shafts were dangerous and repeatedly resulted in accidents.  On September 3, 1874 The Evening Telegram reported "Henry James, colored, a porter, of Brooklyn, fell through the hatchway of No. 45 Beekman street from the fifth to the first floor, and had both his legs broken."
The three tenants remained for years.  By 1878 Edward Chamberlin & Co. had reorganized as Chamberlin, Whitmore & Co.  That year it was hiring, looking for "an experienced designer and stone engraver on fine work" and "a strictly first class foreman for job work; must be a skilled compositor."  It was still in the building on November 20, 1885 when The Aegis and Intelligencer said "This firm are importers and manufacturers of the finest papers and cards known to the trade."
Within a year, however the Hallsted family would have a new set of tenants.  In 1886 the wholesale dealers of paper and cardboard, J. E. Linden, had space.  Like Chamberlin, Whitmore & Co. before them, they also handled printing.  An advertisement that year touted "ruled printers' blanks, job ruling of all kinds, new designs in Ball programmes, tickets, etc."  The firm was looking for a specialized employee in December 1890.  Its help-wanted ad sought "a feignt line ruler."
Around 1894 James C. Hallsted sold the building to tenant Myrick Plummer.  The principal in M. Plummer & Co., a wholesale paper dealer, he was described by The Press on December 6, 1894.  "His hair is snow white and he is 59 years old; yet Mr. Plummer's step is elastic, his form erect and stately, and his eyes are clear and bright."
Plummer was born in Gardiner, Maine and had entered the paper business in 1865.  His success was reflected in his sumptuous mansion at No. 18 East 68th Street, steps from Fifth Avenue and Central Park.
In March 1900 Plummer suffered a stroke and was forced to retire.  Two months later, on May 17, a second, more severe stroke, claimed his life.  On reporting his death the New-York Tribune called him a "wholesale paper merchant of prominence."  His wife, Mary Emma, took title to the Beekman Street building.
M. Plummer & Co. continued under the direction of Plummer's former partner of 20 years, Watson F. Munger.  Like Plummer, he was from Maine, born in Windsor in 1841.  Less than a year after Plummer's death, Munger died in his home in Brooklyn on April 26, 1901 at the age of 60.  It signaled the end of M. Plummer & Co.
The building continued to be home to paper and printing firms.  H. C. Hulbert & Co., papers, moved in and by 1904 Basset & Sutphin, printers, was in the building.  Mary Plummer sold the building that year.  It changed hands three times before February 1905 when Stephen Caplin, the head of the Union Card & Paper Co., purchased the property.
Unlike all of the previous firms, for decades to come The Union Card & Paper Co. would be the only occupant of the building.  An annual marketing tool was the complimentary pocket calendar it sent to its repeat customers.  On December 21, 1912 The Highland Democrat reported "The Union Card and Paper Company, of 45 Beekman street, New York, have send out to their patrons a handsome diary for 1913.  The book is bond in red leather and lettered in gold...In addition to the regular pages found in all diaries, there are several additional pages for the use of the busy man which will be appreciated." 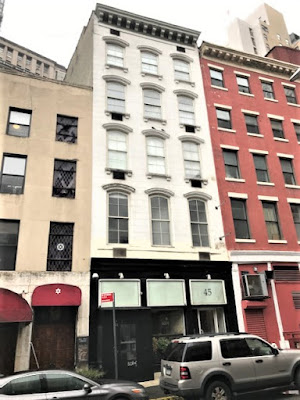 In 1976 a renovation to the venerable marble building resulted in one apartment per floor above the store level.  A subsequent update completed in 2002 increased the number to two apartments on each floor.  The white marble has been painted white and the storefront given a modern but sympathetic remake.
photographs by the author
Posted by Tom Miller at 1:18 AM