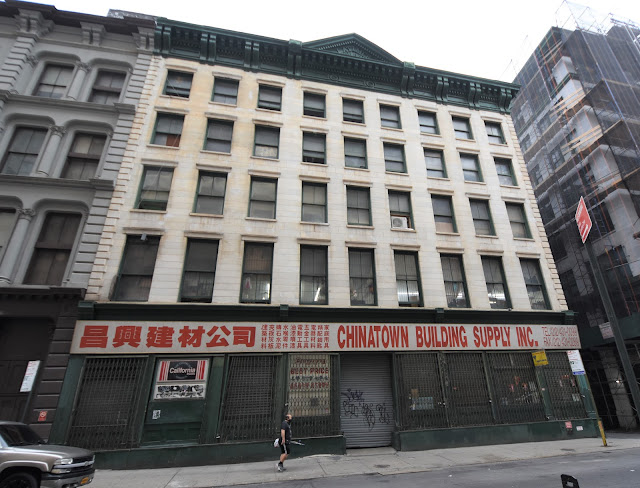 On February 14, 1862 an advertisement in the New York Herald offered for lease "the five story marble front Store 72, 74, 76 Walker street...suitable for any kind of business."  The building had just recently been completed after two years of construction.  The unknown architect hired by owners Barret Ames and E. D. Hunter had created an Italianate structure which drew little attention to itself.  Above the cast iron storefront level the only decorative details were the marble quoins and molded lintels.
The advertisement was answered by Harvey Miner and Henry M. Stevens, partners in carriage manufacturing firm Miner & Stevens.  Just two months later they were ensconced in the building, advertising:

Carriages and light Wagons, of the latest fashionable styles and improvements, and for elegance of finish, style and durability are equal to any in this market, to which we invite the inspection of purchasers.

They announced an innovation in an advertisement in the New York Herald a few weeks later, on May 10, entitled "A New Thing."  It said the firm was "using on all their carriages and road wagons the Patent Malleable Grooved Axel Box, which causes the vehicle to run much lighter than the old fashion cast iron box."

By 1868 Charles Zinn & Co. had replaced Miner & Stevens in the building.  The firm's showroom was around the corner at No. 406 Broadway.  In the Walker Street factory it manufactured "baskets, willow ware, rattan and colored willow furniture &c."
The "willow furniture" mentioned in the ad became increasingly popular in Victorian households in the 1870's.  The easily manipulated material enabled intricate decorations on elaborately crafted chairs and tables and fern stands, for instance.  An advertisement for "Holiday Goods" in December 1873 touted "ladies' work tables, flower stands, rattan and willow furniture."
In 1884 Chas. Zinn & Co. moved to Nos. 134-140 Grand Street.  It may have been the loss of his main tenant that prompted owner Dr. Henry B. House to hire architect John B. McIntyre to design a new Italianate style cornice.  Within the triangular pediment the name LATIMER BUILDING was cast.  It is possible the renovation was the result of a proposed lease of the building to merchant Edward Latimer; but if so it never happened and the Latimer Building name became a conundrum. 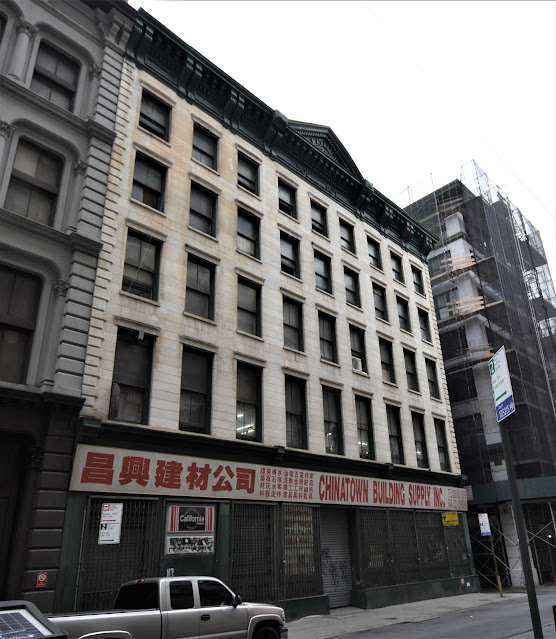 Instead of a single tenant, there were now several, including Lesem, Mayer & Dazian, makers of umbrellas.  In July 1889 the firm was looking for "experienced hands for tipping on covers."
In 1892 The F. M. Lupton Publishing Company shared the building.  The firm offered extensive "series" of books, like the 31-volume The Adelphi Series which included the complete works of Charles Dickens, W. M. Thackery and George Eliot.  The Bijou Series was even larger at 129 volumes and included mostly lesser-known authors, although Nathaniel Hawthorn and J. M. Barrie were among them.
The firm had been founded by Frank Moore Lupton in 1880.  In addition to its hard and softback books, it published several periodicals including Fireside at Home, Fairy Voices, and The People's Home Journal.
On January 4, 1896 the Record & Guide reported that the Latimer building, "a five-story, marble front structure," had been sold for $180,000.  The price Sonn Bros. paid would equal about $5.65 million today.  The New York Times commented that the purchase "seems to be in the nature of an investment."  And apparently it was.  Just four months later Sonn Bros. sold the property to John Livingston for $200,000--making a quick profit equal to $630,000 in today's money.
Along with The F. M. Lupton Publishing Company at the time were tenants Bick Bros, clothing manufacturers; and Sandors Mfg. Co., leather goods makers.
A notice in Publishers' Weekly on January 23, 1897 announced that the Lupton firm "beg to notify the Trade that there has been an entire change of management in this concern."  It advised that "Mr. J. M. Ruston, connected for the past several years with Hurst & Co., is now Sole Manager of this company."  Two years later the firm moved to Duane Street.  (Frank M. Lupton suffered intense "melancholia" in later years and on October 6, 1910 was found dead in his bathroom having slit his throat with a penknife.)
In February 1915 the James G. Shaw Blank Book Company signed a lease for the entire building.  The vintage building required significant updating.  The Record & Guide noted "Extensive alterations, including installation of new stairway, sprinkler systems, elevators, etc. will be made from plans by Frederick Putnam Platt."  (F. P. Platt & Brother would become best known for its numerous designs of Horn & Hardart automats.)
The article noted "the lessees were influenced in the selection of this locality by the many advantages which it will enjoy when all the subways have been completed."  In fact, James G. Shaw Blank Book Company had a history on the block.  As early as 1859 it was operating from Nos. 48-50 Walker Street before moving to Houston Street.
James G. Shaw Blank Book Company remained in the building well into the 1920's.  After mid-century two freight firms operated from Nos. 72-76, the Laufer Shipping Co., Inc. and the Mar Shipping Corp., and as the century drew to a close sportwear firms occupied the building. 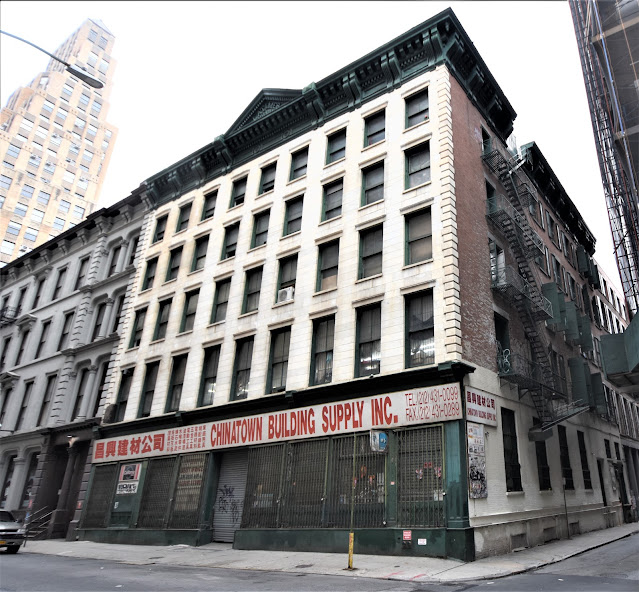 While so many of the Tribeca factory buildings were converted to residential lofts at the time, Nos. 72-76 continued its industrial life.  The marble façade has been carefully cleaned and the 1885 cornice freshly painted, bringing the 158 year old building nearly back to its original appearance.
photographs by the author
Posted by Tom Miller at 1:14 AM