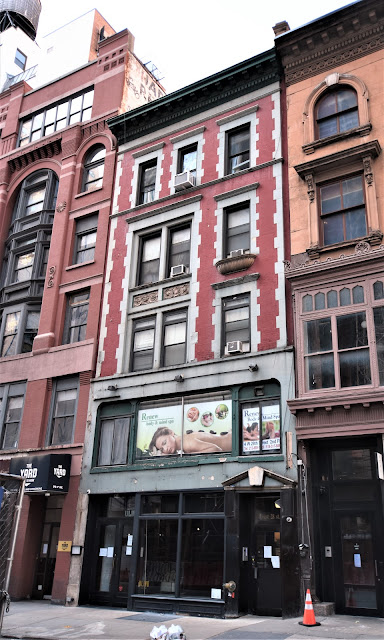 In 1866 Miller's Stranger's Guide to New York described the area around Madison Square, saying "The houses surrounding this park include some of the most elegant of this city."  Four years earlier the estate of J. J. Coddington had completed an upscale, four story brownstone two blocks north of the park at No. 4 West 28th Street, just west of Fifth Avenue.
The 25-foot wide house became the home and office of Dr. William Elmer.  The son of the esteemed Dr. William Elmer, Sr., of Bridgeton, New Jersey, Elmer's residency on West 28th Street was short-lived.  He moved back to Bridgeton by 1865, selling No. 4 to dentist Samuel Hassell.  He and his son, John J., worked together as Samuel Hassell & Son and, as Dr. Elmer had done, ran their dental practice from the house.
The family maintained a summer home on Long Island at the time; but sold it the year after moving into the 28th Street house.  Hassell's description of the property on February 10, 1866 reveals his comfortable financial status.

The family was taking in boarders by 1870.  That year Mary M. Beers, the widow of John Beers, and William Josephy, leather merchant, lived with the Hassells.  An advertisement on September 21, 1874 described "Handsomely furnished rooms on second and third floors to let with first-class board, to a private German family."

It was leased to the eminent physician M. Josiah Roberts.  He was the instructor in orthopedic surgery and mechanical therapeutics at the Post-Graduate Medical School, and in 1881 he published Lectures on the Practice of Medicine, a compilation of seminars by Dr. Francis Delafield.  The esteem in which he was held among the medical community was reflected in an article in the Journal of the American Medical Association on January 5, 1884.  "A reception to Dr. M. Josiah Roberts, of New York, was given on Thursday evening by Dr. William H. Daly, of Pittsburgh, in that city.  Several of Dr. Roberts' professional brethren in New York, Philadelphia, Chicago and elsewhere together with a large number of Pittsburgh physicians, were invited to be present."

Dr. Roberts would soon have to relocate his practice.  John R. Robinson, hired Henry F. Kilburn to remodel completely transform it.  The architect's plans, filed on April 17, 1885, included "take down front wall and extend building on front 4.3 [feet]...one story fitted up for stores and upper stories for flats."  The cost of the make-over was $10,000, or just under a quarter of a million in today's dollars.

The renovations were completed early in 1886.  Kilburn had clad the façade above the two-story cast iron storefront in brick trimmed in stone.  The Queen Anne design included quoins around the openings and up the sides, a whimsical half-bowl below a fourth floor window, and carved spandrel panels between the paired openings of the third and fourth floors.


One of the commercial spaces was taken by ladies' tailors Adams, McIvor & Allen, which started business in January 1887.  Mrs. Charlotte Adams had joined forces with three former employees of John Patterson & Co., one of the city's most high-end manufacturers of women's wear.  The other space was taken by well-known real estate agent Charles S. Peck, who would remain at least through 1893.

The residents of the apartments were well-heeled, like famous actor Richard Mansfield who had a flat in 1892, and Samuel Mason who was wealthy enough to own his own carriage.


Mary Chelton, however, was not so respectable as her neighbors within the building.  She and another young women were secretly engaging in prostitution.  On December 10, 1893 The Press entitled an article "Purification Goes On" and reported that Police Captain Schmittberger and 60 detectives had raided brothels the previous evening.  Among them was a flat in No. 4 and "here were arrested Mary Chelton and one inmate."

By 1897 Joseph Guggenheim had established his jewelry store here.  He advertised himself as "appraiser of diamonds.  Correct estimates given."

Millionaire Robert Hoe, head of the printing business R. Hoe & Co., purchased the property in October 1898.  Although he made few other changes, the lower level became home to Morello's Restaurant that year.  The New-York Daily Tribune's weekly "Where To Dine" column regularly included Morello's, noting that the ambiance included music.

Following the turn of the century S. Wyler's jewelry store was in the ground floor store while the upper space was home to wholesale florist Charles Schenck.

One Saturday night in the fall of 1905 a burglar somehow gained entrance and emptied Schenck's cash register.  It happened the next Saturday night, and the next.  Schenck laid a trap.

On Saturday night, October 21 he closed up as usual, but did not leave.  He hid in the dark near the cash drawer and waited.  And he did not have to wait long.

The Evening Telegraph reported "Less than half an hour after the store had been closed the front door was opened with a key and Mr. Schenck, to his surprise, beheld a former employee.  The young man had been accustomed to opening the store when he was employed there and had a key."

Schenck watched as the youth opened the cash drawer, then rushed him, knocking him to the floor.  The thief escaped, however, running westward toward Sixth Avenue.  Schenck was close behind, yelling "Stop, Thief!"  The newspaper reported "Many persons joined in the chase."

At the end of the block, actor Robert Cummings had just turned from the avenue onto 28th Street.  He was headed to Proctor's Fifth Avenue Theatre where he was playing the part of Sir Oliver Surface in School for Scandal.  "Mr. Cummings, who is big and strong, nailed the quarry by knocking him down.  Then he picked up the fellow and protected him until Policeman Williamson...relieved him of the prisoner."

Schenck assumed that Cummings was a detective.  But the following Tuesday a friend commented, "That was Bob Cummings who stopped your thief."  With this new knowledge, Schenck walked into Proctor's Theatre before the matinee, "laden with flowers."  The Telegram said "They were not for Amelia Bingham nor yet for Frances Starr, but for Robert Cummings."


In the beginning of 1907 Schenck left and the "parlor floor" as described by the New-York Tribune, store was taken by Minot Govan, dealer in photographic supplies.  His announcement in The Evening Telegram noted "Last week of bargains before removal to 4 West 28th st.; portrait cameras at $3 and $5; camera stands, $3 up; lenses portrait, $10 up" and so on.  A $5 camera was indeed a bargain, equal to about $140 today.

S. Wyler was still at the address that year.  As Christmas approached on December 19, he held a sale "on account of lateness of the season."  He promised that his "genuine antique jewels and finest European and American silver" would be sold "at prices which defy competition, less than 1/3 of prices asked elsewhere."

More likely, the reason behind the sale was that Wyler was in financial trouble.  A year later the jewelry store was gone and the Label Shop replaced it.  The Label Committee had been formed by a consortium of labor unions.  The "label" or stamp J. H. U. was sewn or stamped into union-made products.  In its September 1, 1911 report, the Label Committee wrote "The most important development in regard to the label was the opening on February 4, 1911, of the Label Shop at 4 West Twenty-eighth Street."

The shop was stocked with union-made clothing, "tub and lingerie dresses, silk waists, chiffon jumpers, shirtwaists," etc.   The Brooklyn newspaper The Chat said "The purpose is to demonstrate that women can purchase all necessities for wearing, from gowns to underwear, made under union conditions."

The group's president, Carola Woerishoffer, was described by The New York Press as a "wealthy suffragist and social worker."  A tireless worker, she was also the treasurer of the Woman's Trade Union League, a director of the Greenwich Settlement House, and of the Labor Legislation Association.  The New York Press said "She took an active interest in the strike of the shirtwaist girls, and bailed them out as fast as they were arrested."

The Label Shop left in 1913.  Russin & Hanfling had its office and salesroom in the building by now.  Its advertisements described it as "Manufacturers and Importers of willow and fancy baskets for florists" and "dealers in florists' supplies."

On October 22, 1916 The Sun reported that A. Cotromano had taken the "store" "for restaurant purposes.  It is unclear whether that included both floors.  Then, following the sale of the building in July 1920, The Real Estate Record & Builders' Guide reported that the new owner, the L. K. Schwartz Co. "will alter the property and resell it."

The renovation was not begun until 1922 and was completed the following year.   There were now apartments above the two-story commercial space.  Among the initial residents were Dr. Riedon, and Morris Schwinger, both of whom were involved in poison pies that year.

On August 1, 1922 the New-York Tribune ran the headline "Broadway Pie Poisons Scores; 4 in Hospital."   The article reported that "police estimate that between fifty and one hundred persons were affected" after eating "peach, huckleberry or blackberry pie" at the Shelburne Restaurant.  Among the victims taken to Bellevue Hospital where their stomachs were pumped was Morris Schwinger.

A month later, on September 9, the same newspaper reported "The police of the East Twenty-second Street station swooped down on the Purity Shop, Broadway and Twenty-sixth Street, yesterday afternoon, after the sudden illness of two girls."  The shop girls were initially treated by Dr. Riedon.  Unlike the poison pies, exactly which food they had eaten was more difficult to trace.  The article described their hearty meal: "They had eaten soup, salmon, potatoes, bread pastry and salad."

In 1931 the shop was remodeled for a restaurant and the apartments updated.  Among the residents in 1937 was Cleveland Bissell.  The editor and cartoonist of Shape-Up, the periodical of the C.I.O. labor union.  It was a position that risked enraging hard line union workers.

That summer tensions were high between the A. F. of L. longshoremen's union and the C. I. O. opposition.  On September 21, 1937 Bissell went to a meeting on the Hudson River docks "to bring about harmony."  It did not end that way.  The New York Times reported that outside a Ward Line pier ten members of the International Longshoremen's Association "set on him."  One of the men, Frank Savio, struck Bissell with a bottle.  Savio was convicted of assault the following month.

The 28th Street block suffered neglect through the succeeding decades.  But in 2013 the Italian restaurant Mercato Trattoria signed a lease and today Ulivo, also an Italian restaurant, calls the space home.  And while the commercial space cries out for attention, the upper floors are wonderfully intact.