Early in 1898 Tomas R. White and his wife, Henriette K. bought and demolished the two brownstone-fronted houses at the northwest corner of Columbus Avenue and West 80th Street.   They commissioned architect Henry F. Cook to design a high-end apartment house on the property.  His plans, filed in March, called for a "fireproof" brick and stone structure to cost a staggering $235,000--just under $7.5 million today.
Construction was completed by the end of the following year.  Cook's Beaux Arts design include a three-story stone base and seven stories of vibrant red brick and white limestone.   The architect relied more on the striking contrast in colors than on the frothy ornamentation expected in the style.  For the most part, he forewent fruity swags and garlands, using instead more formal molded lintels supported by scrolled brackets to accentuate his design.
Called the Warwick Arms, there were two apartments per floor--one with seven rooms and the other eight.  Each apartment had two bathrooms (one for servants).  Tenants paid between $1,600 to $2,200 per year, or about $5,760 per month today for the most expensive apartments.  An advertisement stressed that the servants quarters "are totally separate, though in the same apartment."
The building filled with affluent tenants, like Asa Alling Alling, a well-known attorney, and his wife, the former Louise Floyd Smith.  Born on May 4, 1862, he had graduated from Cornell University in 1883 and from Columbia Law School in 1885.  He traced his American roots to Roger Alling, a Puritan who arrived in 1637.
Alling was a member of the legal firm Kenneson, Crain & Alling.  His social status was reflected in his exclusive club memberships--the Metropolitan and Manhattan Clubs and the New England Society.  Sadly, he would not enjoy his new apartment for long.  He contracted appendicitis in February 1900 and was confined to home.  The Sun said "From the beginning of his illness his physicians, Dr. Bull and Dr. Janesway, had no hope of his recovery."  He died in his apartment on April 14.
Broker Byron White lived with his parents here at the time.  The young man celebrated Christmas Eve to excess in 1901.  The New York Press reported that a resident of Riverside Drive near 79th Street called Police Headquarters that afternoon, frantic because there was a dead man sprawled on a bench in Riverside Park.
A patrolman was sent to the scene and when he began to lift the corpse, it grunted "Lemme alone."  The newspaper explained "He was drunk.  That was all."  About that time two detectives arrived.  "They were disgusted when they learned the true state of affairs," said the article.
Officer Sheridan, who was the first to arrive, felt bad about arresting the young man.  "It's the day before Christmas, though, and I hate to do it.  But this is Riverside Drive."  A patrol wagon took the protesting 'dead man' to the police station.  There he hiccoughed the information that he was Bryon White.  His father arrived that night to post bail.  The article said, "No member of his family could be seen last night at the Warwick Arms."
Additional rental income was provided for the building's owner (Joseph C. Levi had purchased the property from the Whites upon its completion) by retail shops on the Columbus Avenue side.   An initial tenant was the upscale haberdashery, Butler & Cleland. 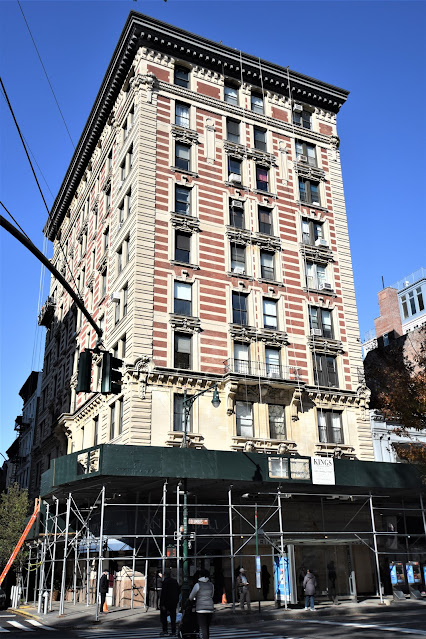 Henry F. Cook's handsome red-and-white design survives beautifully intact today.  A reminder of a time when well-to-do apartment dwellers shared their sprawling homes with servants--who were kept "totally separate."
photographs by the author
Posted by Tom Miller at 1:09 AM