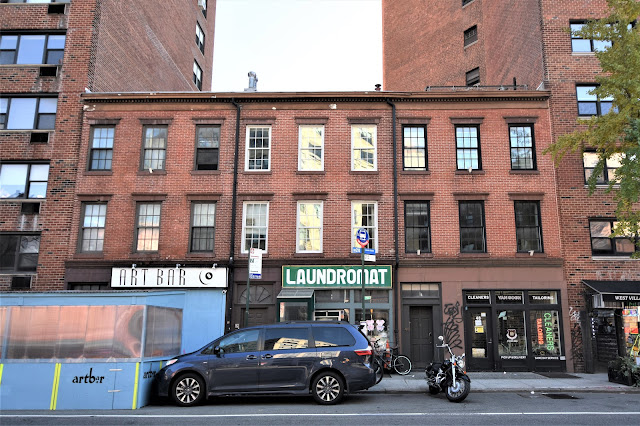 Early in 1845 Asher B. Hamlin purchased the vacant parcel along Eighth Avenue between Horatio and Jane Streets.   Before the year was out he had erected a row of eleven identical three story houses, each with a store at the ground floor level.  Faced in red brick and trimmed in brownstone, a continuous dentiled cornice ran the length of the row.
The first commercial tenant in No. 48 was the China and American Tea Mart.  As the name suggested it sold a wide variety of teas as well as coffees, sugar and spices.  The store remained through 1850 when an auction was held in December of the stock and fixtures.
The space next became home to a real estate office, Ross & Erving, operated by William Dunning, Reuben Ross, Jr.   Ross owned the building and leased the upper portion to Nelson D. Thayer and his family.
Nelson D. Thayer was born in Schenectady on November 6, 1818 and moved to New York City in 1829.  He married Margaret Eliza Brown in 1840 and the couple had six children, Joanna, Lovina Ann, Margaret Jane, Irene, Seth Nelson, and Ella.  A merchant, Nelson was highly involved in civic affairs.  In 1857 he was elected to the City Assembly (he held the position as late as 1866) and in 1859 was elected Fire Commissioner.
The Thayer family would live here into the 1860's and the real estate office on the ground floor remained until 1869 when John Ross offered the "store and dwelling" for lease.  The store became Charles F. Spina's tobacco store (which he advertised as "segars"), and the upper portion became home to Lewis Beer, who had two butcher shops, one on Sixth Avenue and the other on West 12th Street.
In the meantime by 1853 the store next door at No. 50 was the combination fish store, run by John Mangles, and William H. Strang's butcher shop.  The two men may have been related by marriage, for they also shared the same home address on West 27th Street.
Around 1857 the space was converted to a hardware store, run by Walter Gorman who lived on Horatio Street.  It was soon taken over by Boyd Thistle who renamed it B. Thistle & Co.  Around 1863 he took his son, Edward, into the business.  The Thistle hardware store remained through 1868 after which the space was briefly the "eating-house" of Joseph Dupuis.  In 1871 Jose Praero opened his bird store in the shop.
Bookkeeper John E. Roades lived upstairs in 1885.  He walked into the Essex Market prison on the night of February 10 saying he was looking for James D. Fish, president of the Marine Bank.
The Evening Telegram reported "He acted so eccentrically that he was locked up.  In the station house, this morning, Rhodes was seen writing, and when asked what he was doing, said 'I am making a memorandum for the undertaker.'"  Later, in the Essex Market Police Court he busily wrote down everything that was said.  The article concluded saying "Justice Welde committed him to the care of the Commissioners of Charities and Correction for Examination."
By then Conract Kleinschmidt's barber shop was at No. 52.  Upstairs lived Charles Osborn, a laborer.  A barber shop, run for years by Christian Gutmann who took over from Kleinschmidt, would remain in the space for nearly the rest of the century before becoming a laundry.
At  the turn of the century Sidney Sandford ran the laundry at No. 52.  He was kind to a homeless man in the neighborhood, Louis Simble, one newspaper saying, "Through charity Mr. Sanford allowed him to sleep there at night."  Sanford arrived at the store on the morning of March 13, 1902 and went to the rear to rouse Simble.  To his horror, he found the 52 year old had died during the night.  The New York Evening Telegram advised "The man had died from natural causes."
By now the store at No. 48 was once again a real estate office.  In 1906 it was run by B. W. Hitchcock, and by 1906 was the main office of the Staten Island Homes Company.  The firm established the New Dorp Manor project that year, selling lots for between $100 and $300 with monthly payments of between $2 to $6 (about $175 per month for the most expensive payments).  In announcing the development, the firm said "Eighty thousand persons now delight in the life on Staten Island and their voices are being raised for subways and bridges that will bring them into Manhattan more quickly."
Around 1950 the storefronts were connected internally and the sprawling space became the Sea Colony Restaurant.  It became a lesbian meeting space with a dance room where women were free to dance together.  The then-illegal activities were somewhat protected by the Mafia, which owned the business (as it did many of the gay bars at the time).   Like all gay bars, the Sea Colony was routinely raided by police, but a warning system alerted the patrons who rushed from the dance floor to tables.  The Sea Colony remained in the space into the 1960's.
The stores were again separated and around 2000 No. 52 became Art Bar, named for its gallery exhibits of the works of local artists.  The middle space was the Contact Tour Services office in the 1970's, and in 2002 Chocolate Bar opened in No. 48.  It stayed until 2006 when it moved to No. 127 East 7th Street in the East Village. 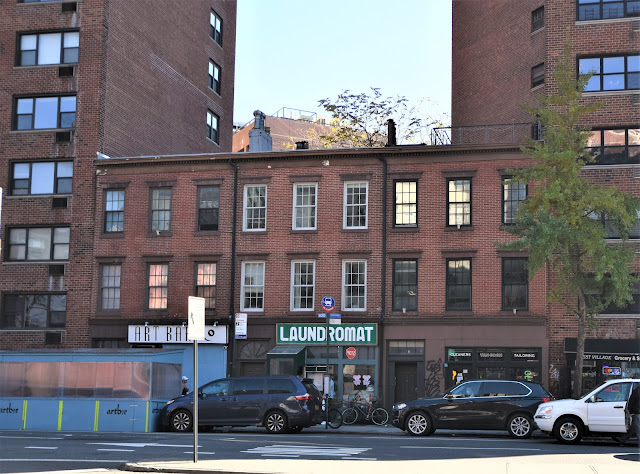 While their eight identical siblings were demolished in the first half of the 20th century, these three somehow survived, remarkable relics of a much different Eighth Avenue 175 years ago.
photographs by the author
Posted by Tom Miller at 1:09 AM